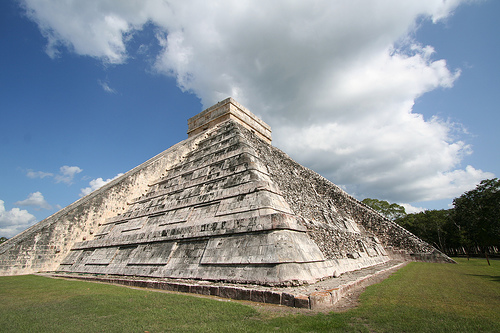 Maya BANNED from performing ceremonies at ancestral temples in Mexico

Mexican authorities have banned Maya spiritual leaders from performing ceremonies at their ancestral temples, which are about to be overrun by a curious assortment of conspiracy theorists, dooms-dayers, new-agers and well-intentioned tourists who just want to be apart of the festivities.

The Ceremonies are meant to mark the end of the Maya long-count calendar, which began 13 Baktun (cycles) ago. Under the Greco-Roman Calender, that’s about 3112 BC.

Contrary to popular (mis)belief, the end of the long-count calendar is being viewed as something positive. As Mayan priest Jose Manrique Esquive recently pointed out, the current Baktun, which began around 1618, has been drenched by a continuous reign of misery that included the introduction of European disease, culture and language being erased and entire populations being extinguished.

“This is the ending of an era for the Maya, an era which has been very intense for us, in which we have had suffering and pain,” said Manrique Esquivel, adding “we are praying the wars, the conflicts, the hunger to end.”

Despite their intentions, the government is refusing to let any Maya traditional perform their ceremonies inside Chichen Itza, Coban, Tulum and other sites that their ancestors built.

“We would like to do these ceremonies in the archaeological sites, but unfortunately they won’t let us enter,” continued Manrique Esquivel. “It makes us angry, but that’s the way it is … we perform our rituals in patios, in fields, in vacant lots, wherever we can.”

The press director for the government’s National Institute of Anthropology and History claims there are two reasons for the ban: “In part it is for visitor safety, and also for preservation of the sites, especially on dates when there are massive numbers of visitors… Many of the groups that want to hold ceremonies bring braziers and want to burn incense, and that simply isn’t allowed.”

Of course that’s just the excuse. The government would much rather keep the Maya on the sidelines since they are orchestrating a massive commercial spectacle for tens of thousands of people, many of whom are are clinging to delusional hopes and irrational fears about what’s going to happen at the end of 13 Baktun–December 21, 2012.

However, the Maya are still going to be allowed to visit the sites along with the tourists, but they will likely have to pay to get in, just like everyone else.

Meanwhile, as the Maya proceed with their ceremonies, shops in a Siberian city continue to sell Apocalypse kits; Beijing residents are stocking up on crackers, bottled water, and life preservers; in southwest France, the town of Bugarch prepares for a possible deluge of visitors who believe that a mountain could save them from the end of the world; and all the big corporate media services happily continue to spread the mania–all of which stems from little more than basic ignorance toward Indigenous perceptions and realities.