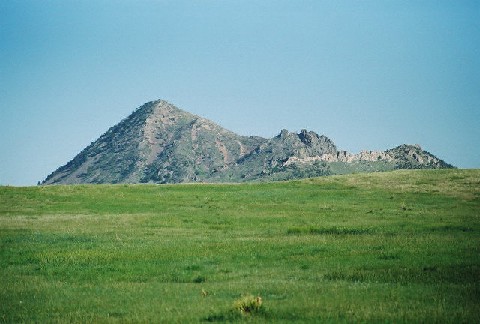 The following 40-minute video is a segment from last year’s “Mato Paha-Bear Butte Spiritual Forum,” an event that brought together Traditional Healers (Medicine Men) and Spiritual Leaders from many Tribal Nations to provide ancestral teachings about the spiritual significance of Mato Paha. It was the first time in decades that such a gathering took place.

Bear Butte is held sacred by the Cheyenne, Arapaho, the Sioux nations, as well as to the Kiowa and Arapaho, among others.

The Lakota believe it to be “the most powerful land mass in their religion. They consider Bear Butte sacred for its location near the Black Hills and due to the fact that one can find the seven sacred elements – land, air, water, rocks, animals, plants, and fire – surrounding the Butte. The Lakota believe that Bear Butte is most sacred when worshippers pray there with the Lakota Sacred White Buffalo Calf Pipe.”

To the Cheyenne, Bear Butte is the home of their Culture, Language and Values. Henrietta Mann, interim president of the tribal college located in Weatherford, Okla recently shared the story of Sweet Medicine, who “was said to have been raised by an old woman and banished from the tribe after a crime of violence. After four years, he emerged from present-day Bear Butte preceded by a powerful spirit who burned sweetgrass to purify the world. Cheyenne traditional tribal government, military societies, code of law, rules of conduct and prophecies are attributed to him.”