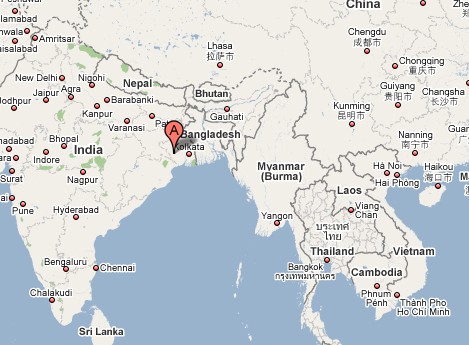 What we are witnessing in the tribal belt of West Bengal is [an] historical moment. A long oppressed people have risen up and are daring to confront their oppressors and question the logic of “development” that destroys their lives and livelihoods.”

In what started out as a protest against police brutality, on November 7 more than ten thousand Santhal men and women converged in the Indian state of West Bengal to demand the end to state oppression and the constant dispossession of their lands.

It is an historic moment for the tribal peoples in the region — and one so unprecedented that authorities are not even sure what to do about it.

“Even the political parties and civil society are at a loss trying to come to terms with what is happening,” says Partho Sarathi Ray, in one of several reports on Sanhati.com. “Nothing like this has been witnessed in West Bengal in living memory.”

The uprising reportedly began following a land mine explosion on November 2, which targeted the state’s chief minister as well as the union steel and mines minister.

The two men were returning from the inauguration of the Jindal Steel Works (JSW) special economic zone (SEZ) in West Midnapore district. Approximately 5000 acres of land had been acquired for JSW, the vast majority of which was supposed to be distributed amongst the landless Adivasis (indigenous people) in the region. The government handed it over to the company instead.

The explosion was promptly blamed on the Maoist guerrillas — however, in what has become a common practice in West Bengal, the police turned all of their attention to the local indigenous population for being “complicit” in the attack.

Over the next few days, the police set out on a campaign to assault, harass and randomly arrest any tribal person they wanted.

But it just wasn’t enough for the police, who hadn’t the slightest clue who was behind the explosion. So, on November 6 the police “… led by the officer in charge of Lalgarh police station… unleashed a reign of terror in 35 villages encompassing the entire tribal belt of Lalgarh,” explains Ray. “In raids throughout the night of November 6th, women were brutally kicked and beaten up with lathis and butts of guns. Among the injured, Chitamani Murmu, one of whose eyes was hit by a gun butt, and Panamani Hansda, who was kicked on her chest and suffered multiple fractures, had to [be] hospitalized. Chitamani’s lost her eye because of the injury. Eight other women were badly wounded. These police brutalities soon reached a point where the adivasis had no other option but to rise up in revolt,” Ray continues.

The next day, “what began as rumblings of protest took the shape of a spontaneous mass uprising [of] ten thousand Santhal men and women, armed with traditional weapons, [who] came out and obstructed the roads leading to Lalgarh, disconnecting it from Midnapur and Bankura. Roads were dug up and tree trunks were placed on the road to obstruct the entry of police vehicles, in the same way as it had been done in Nandigram.”

During the night, “people also disconnected telephone and electricity lines, virtually converting a vast area into a liberated zone. The apex social organization of the Santhals, the Bharat Jakat Majhi Madwa Juan Gaonta took up the leadership of the struggle, although the leader of the organization, the “Disham Majhi” Nityananda Hembram has himself admitted that the organization has no control over the movement; rather the movement is controlling the organization.”

As for the government, which has “not dared to respond with overt violence yet”, is helpless in the face of this upsurge. They’ve been trying to negotiate, but the effort has so far been fruitless due to the democratic and decentralized nature of the uprising. They simply can’t exert any influence over the indigenous people.

They way things look right now, the government may have no choice but to concede.