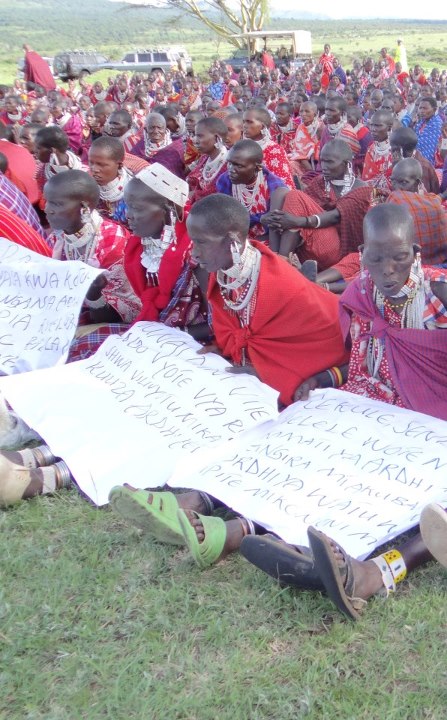 ARUSHA – More than 2,000 Maasai women are taking a bold political stand in a move aimed at protecting community land rights.

From the 27th of March until the 7th of April,women gathered in Magaiduru village, one of the nine villages in Loliondo Division that has recently been declared by the government as a wildlife corridor, essentially prohibiting any future use of the lands by the local communities. The women – some of whom walked more than a day and half to reach Magaiduru – gathered to protest this decision and to collectively demand that the land in Loliondo be returned to the communities.

“Women are gathering and demonstrating because without land there is no life for them,” explains Maanda Ngoitiko, Executive Director of the Pastoral Women’s Council (PWC). “They’ve been empowered over the years, and have deep knowledge about what is happening and are therefore are not willing to sit quietly as their livelihoods are stolen away from them.”

For many years PWC, the Ujamaa Community Resource Team (UCRT) and other civil society organizations in the area have worked to strengthen women’s rights and roles in their communities to help give them a voice in decision making processes and to promote equality. While there have been many men involved in protesting the Loliondo land dispute, women have stood out as leaders and champions in taking a stand against the government’s decision to allot 1,500 square kilometers of community land bordering the Serengeti as a wildlife corridor.

“Women take care of livestock, milking them, treating them, building them shelter and so on,” explains Edward Loure, Executive Director of UCRT. “If land is lost, cattle have nowhere to graze and it is ultimately the women and children who suffer because it is easy for men to go to town looking for employment elsewhere, but women don’t have that option.”

The 2,000 women who gathered in Magaiduru have collected – and are continuing to do so – CCM membership cards in protest against the party that they feel is stealing their land and whom they no longer can trust. “We don’t belong to a party, our party is our land,” says Paraketo, one of the women protesters who has joined from Ololosokwan village, one of the villages on the disputed land.

Some community leaders have requested that the women stop gathering and return their cards, but the women have so far ignored these pleas. “This land belonged to our ancestors, we inherited it, we will never leave,” states Piriusle from Magiduru.

For twelve days the women organized food and transport and are pooling funds in hopes that they can gather more women to join their effort and also to take their message to the parliament in Dodoma.

The government is claiming that this decision is conservation-driven; however, many, including the women in Loliondo feel this is just an excuse for their actions because the communities have been co-existing with wildlife in this area for hundreds of years.