Lessons Learned From a Land Grab in Ghana 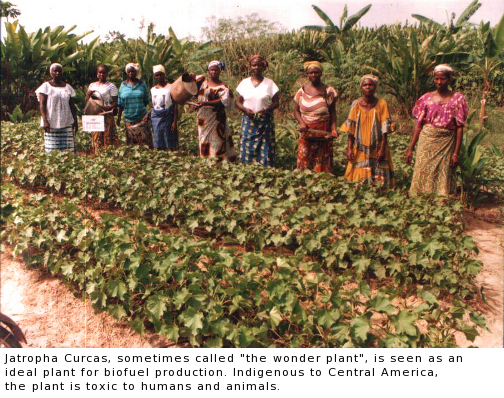 Sharing our experiences with other communities may very well be one of the most vital steps in defending the land, because it offers us a chance to spare others from repeating our mistakes – and from having to bear the burden so often associated with its destruction.

Bakari Nyari, Vice Chairman of the Regional Advisory and Information Network Systems (RAINS), and a member of the Ghana and African Biodiversity Network Steering Committee, recently wrote an article in the hopes of achieving this end.

He tells a story “…of how a Norwegian biofuel company took advantage of Africa’s traditional system of communal land ownership and current climate and economic pressure to claim and deforest large tracts of land in Kusawgu, Northern Ghana with the intention of creating ‘the largest jatropha plantation in the world.'” (NB the plan pales in comparison to Burma’s “National Cause”)

“Bypassing official development authorization and using methods that hark
back to the darkest days of colonialism,” says Nyari, an investor claimed legal ownership of lands “by deceiving an illiterate chief to sign away 38000 hectares with his thumb print.”

“This is also the story of how the effected community came to realize that, while the promised jobs and incomes were unlikely to materialize, the plantation would mean extensive deforestation and the loss of incomes from gathering forest products, such as sheanuts. When given all the information the community successfully fought to send the investors packing but not before 2600 hectares of land had been deforested. Many have now lost their incomes from the forest and face a bleak future.”

Those involved in this struggle want to share their story “as a warning to other African communities, leaders and policy-makers to be wary of the promises made by biofuel investors and the disasters that their land grabbing may bring.”

It all began in November 2007 when a team from RAINS discovered massive destruction of land near a village called Alipe in Northern Ghana.

“Heavy agricultural machinery were systematically pulling down trees and decimating the area a few metres south of the village. The land had been stripped bare of all its vegetation cover. Enquiry revealed that the site was to be the beginning of a large jatropha plantation developed by a Norwegian biofuel company called BioFuel Africa – a subsidiary of Bio Fuel Norway (www.biofuel.no).”

After contacting the District Chief Executive (DCE), RAINS also learned that the project was illegal. It appeared as if the company had no permission or contract to be in the region.

RAINS then visited the community’s Traditional headman, who informed them that “some white men” were pressuring him to give up traditional lands.

Eventually he conceded, with the support of most people in the community, who were under the impression that they would receive jobs and income from the land trade.

“The Chief was initially unwilling to go against the wishes of his people [for that reason],” says Nyari. But even so, he tried to stop the developers. “[It was] interpreted by the community as driving away opportunities to earn an income during the current dry season.”

Upon further investigation, RAINS found that a Government official “was promoting the project and had deployed his business associates in the Region to front for him. This front man was immediately employed as the Local Manager of BioFuel Africa.”

A few days later, on January 28, 2008, RAINS went back to the village to discuss some issues surrounding the land acquisition. Mr Finn Byberg, the Chairman of BioFuel Africa, attended the meeting.

During his presentation, Mr. Byberg essentially tried to con everyone. He failed to state that the promises made to the communities were a guarantee. Rather, he argued that the company was “still learning.”

It was a pleasant way of saying that the promises “of jobs, shared prosperity and improved livelihoods” were nothing more than “campaign gimmicks” and not the company’s problem.

That’s part of the gimmick too, of course.

It goes like this: “rural communities who are desperate for incomes are enticed by developers who promise them a ‘better future’ under the guise of jobs with the argument that they are currently only just surviving from the ‘unproductive land’ and that they stand to earn a regular income if they give up the land for development,” says Nyari.

The companies will also try to capture the imaginations of a few leaders, “[telling them] about prospects for the community due to the project and [swaying them] with promises of positions in the company or with monetary inducements. The idea is that these people do the necessary ‘footwork’ in the villages where they spread the word about job opportunities.”

“A document is then prepared, essentially a contract, to lease the land to the company. In the event of problems the developer can press their claim by enforcing the ‘contract’ or agreement…”

And if things get heated, they can simply pull out, none-the-wiser. Just like BioFuel Africa eventually had to do.

Considering the sheer number of land grabs taking place in the world today, this lesson carries with it a great sense of urgency.

If we do not learn from our mistakes than companies will continue forcing us, tricking us, killing us, and displacing us to repeat them.