The Sierra Club Niagara Group along with the Nuclear Information Resource Service (NIRS) and other partners are holding a press conference on Wednesday, May 15, 2013 at 11:00 am on Main Street near Huron in front of the Hyatt Hotel to protest the proposed plan to transport high level radioactive liquid waste from the Chalk River facility in Canada to Savannah River, South Carolina over public highways! We are calling on DOE to do a Supplemental Environmental Impact Statement (SEIS) to review this unprecedented action and to open a process of public discussion, and to urge Governor Cuomo to request that DOE do an SEIS and also to take action to deny access to NYS bridges and highways for this extremely dangerous trek. 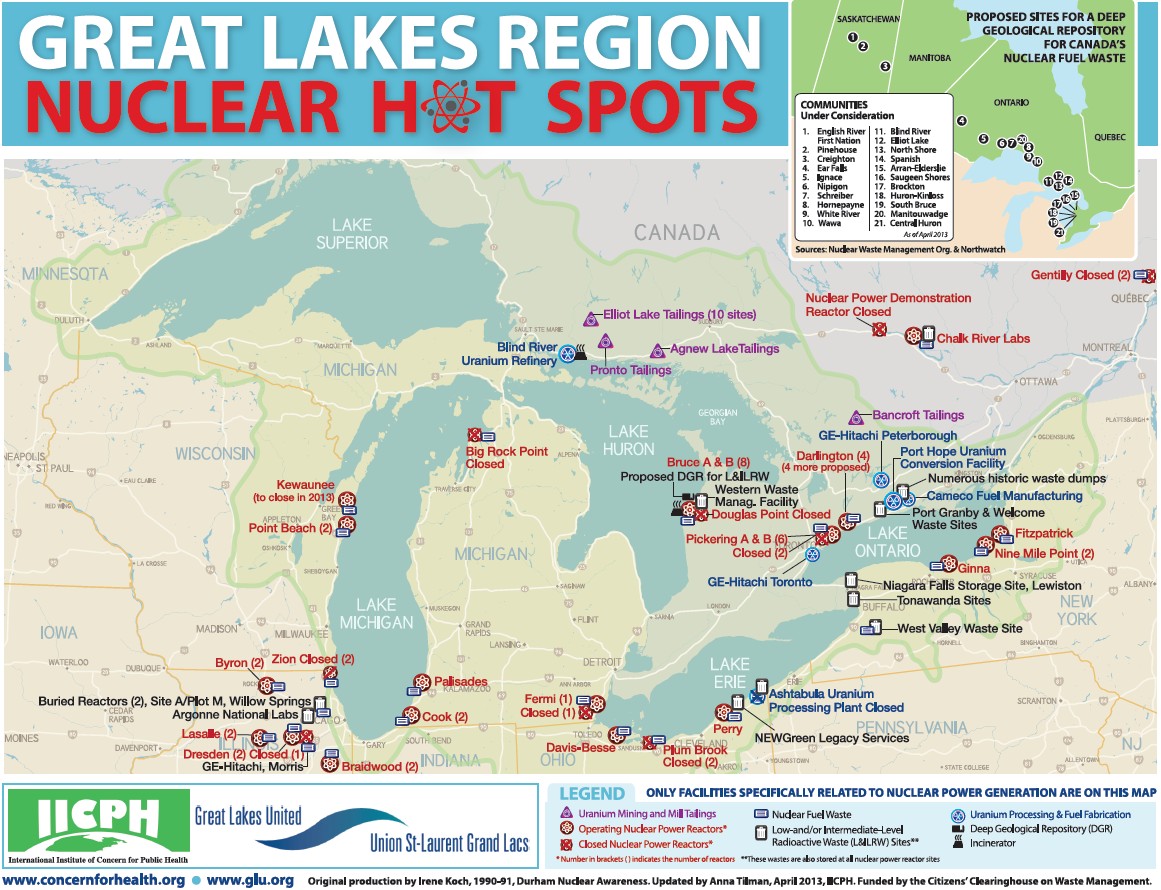 On Wednesday, May 15, the Sierra Club Niagara Group is joining the Nuclear Information and Resource Service, Women’s Indigenous Initiatives, and the International Institute of Concern for Public Health at a press conference on Main Street in front of the Hyatt Hotel in downtown Buffalo. This event is called to inform the citizens of New York State of the DOE plan to ship HIGH LEVEL RADIOACTIVE LIQUID WASTE 1,000 miles across public roads and bridges in the U.S. and Canada. Atomic Energy Canada Limited (AECL) is planning to truck 23,000 liters of highly radioactive liquid waste from its Chalk River Laboratory (CRL) in Ontario to the U.S. Department of Energy (DOE) Savannah River Site (SRS) in South Carolina. The shipments could begin this summer if approved by regulators in both countries. This radiotoxic liquid waste has resulted from using weapons-grade highly enriched uranium in Chalk River’s National Research Universal reactor for decades to produce radioactive isotopes. The waste contains numerous highly radioactive fission products such as cesium-137, iodine-129 and strontium-90.

Barbara Warren of Citizens’ Environmental Coalition reports that “the shipment of LIQUID radioactive waste presents unprecedented risks: the safe containment of the liquid itself, the hazards to workers and bystanders, the potential for accidents en route, theft, terrorism and other mishaps, including the potential of accidentally triggering a nuclear chain reaction. “ The transport of this highly radioactive liquid waste is being justified under a US-Canada agreement to return weapons grade uranium to the United States, a laudable goal to prevent it from falling into the wrong hands. However, as Gordon Edwards of the Canadian Coalition for Nuclear Responsibility says, “There is no reason to ship the material in liquid form as there are options to handling it such as solidifying it and storing it on site as has been done with similar liquid waste at Chalk River since 2003, or denaturing the weapons-grade uranium on site so that it is no longer weapons-usable.”

There has been no process for public discourse on the unprecedented transport of this liquid waste. Why the secrecy? And what’s the hurry? Tom Clements of the South Carolina Friends of the Earth has suggested that “the main driver for the shipment on the US side is the motivation [to] obtain the reported $60 million payment which will be used to keep the H-Canyon reprocessing plant at SRS nuclear weapons site in South Carolina operating.”  The H-Canyon, a $200-million/year cash cow for SRS, is the only remaining reprocessing plant in the US Department of Energy complex. “On the Canadian side, the goal for the shipment is nuclear waste dumping, and Canada should itself deal with this waste.“

“Western NY is still stuck with highly radioactive waste left over from a reprocessing operation that ended in 1972 at West Valley 30 miles south and upstream of the Buffalo and Erie County water intakes. It took more than a decade to turn that liquid waste into solid to help keep it out of our water supply. Now we are threatened with dozens of shipments of similar liquid highly radioactive post-reprocessing waste from Canada passing over our roads and waterways –threatening the Great Lakes, Niagara River and St Lawrence Seaway weekly for 4 years! No way!” stated Diane D’Arrigo, Radioactive Waste Director at Nuclear Information and Resource Service.

“Shipping highly radioactive waste in liquid form to the U.S. is unwarranted and sets a dangerous precedent. Any incident that resulted in human and environmental exposure to this material would be disastrous and unconscionable. It could also legitimize future shipments of similar wastes on a global scale,” a consideration expressed by Anna Tilman of the International Institute of Concern for Public Health. “The plan to ship this waste must be halted and a public decision-making process instituted to deliberate on this matter, for the safety and protection of the public, and for the sake of international security.”

The groups are calling on DOE to do a Supplemental EIS to subject this project to public scrutiny and discussion. They are also calling on Governor Cuomo to also request that DOE conduct an SEIS and to do everything in his power to keep this material off our NYS public roads and bridges.