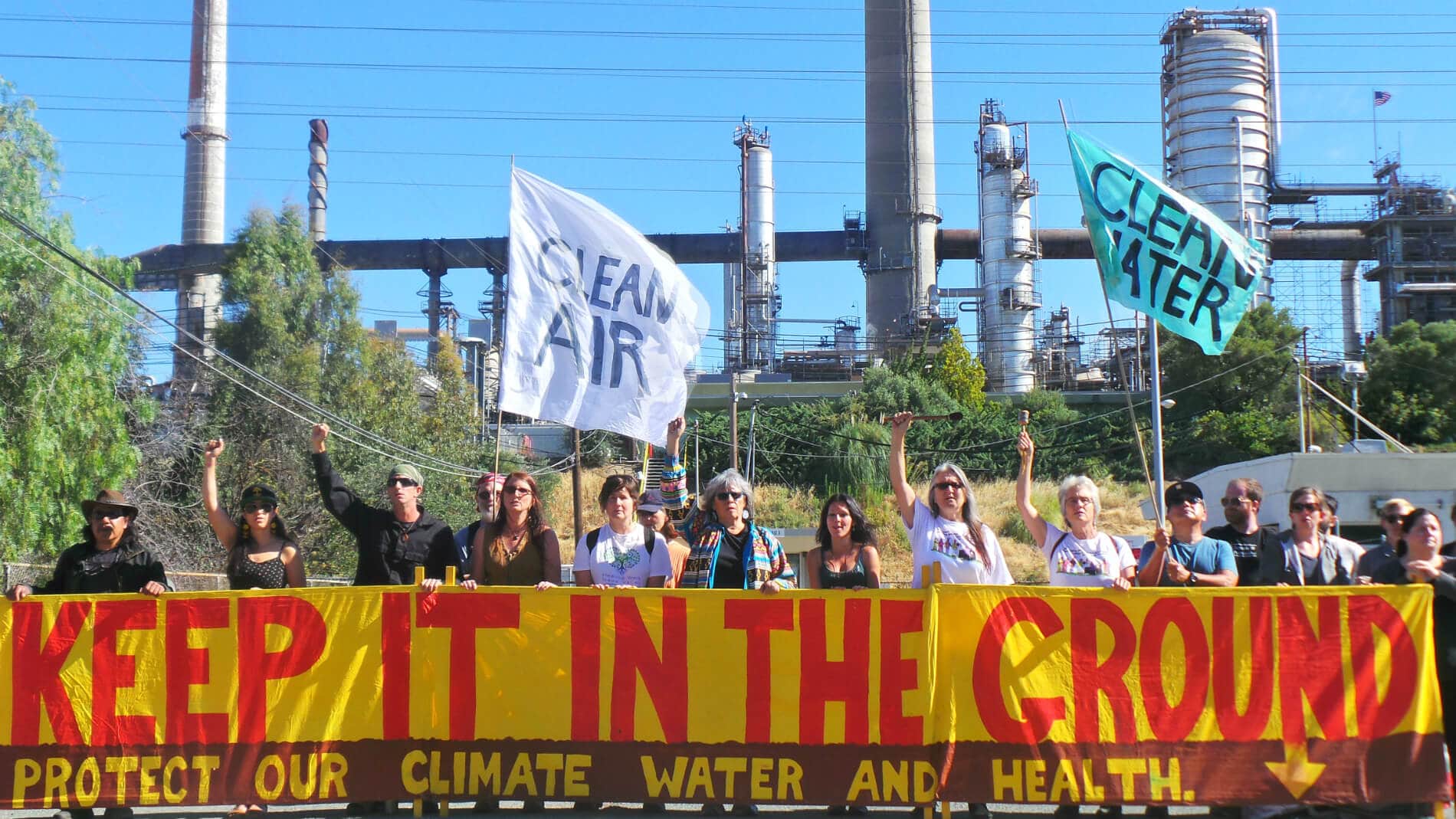 Keep It In The Ground: Which brand of democracy gives the Earth a vote?

Current dynamics in Venezuela have reached a critical peak of tension; and like the planet, things are not forecasted to cool off any time soon.

Despite some of the gross over-simplifications presented by hastily shared internet memes and myopic news reports, there is much more at stake at this juncture than Venezuela’s national sovereignty.

The battle over the future of Venezuelan leadership has risen to ridiculously global stakes. Hegemonic powers not even in the same hemisphere are choosing sides. The question is why…And, the answer is in the question.

This map published on February 3rd highlights the current global divide over this one South American country’s presidency as of that date. The map was produced by the Geopolitical Studies Research Center in the Czech Republic. It provides an alarming visual of what is truly brewing underneath what is being presented as ‘more of the same’ in a long term ideological battle between the United States and the Bolivarian South and Central American nations. 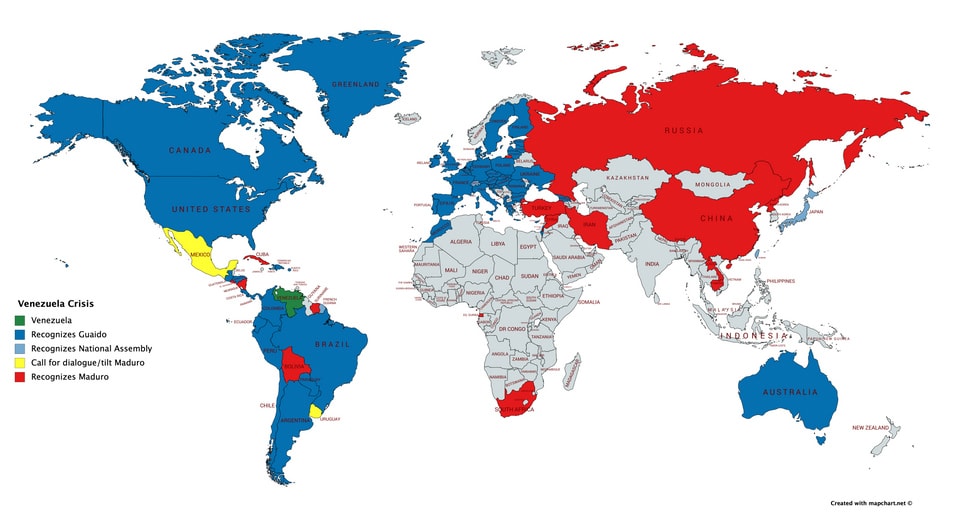 The world is no longer the same as it was during the Cold War of the 1980’s. We live in a multi-polar, plural-hegemonic world, with new global powers ready to flex fresh muscle given the slightest provocation.

As the humanitarian crisis continues to escalate in Central America, Nicaragua has surprised the world by turning into the deadliest nation in the region for human rights, even among the transnational and large scale crises driving the migrant caravans.

As IC previously reported, Russia has played a large role in re-militarizing Nicaragua in recent years – training soldiers, sending weapons and tanks, building the modern equivalent of a Russian military base with satellite technology capable of monitoring activity across the Americas, and, the implementation of a new drug war.

Why would Russia care about drug trafficking in Nicaragua? The short answer is, they likely don’t. And, it’s hard to fathom that they – or any other country on that map – care so much about Venezuelan sovereignty, as to threaten military violence in response to any action from the U.S.

On the evening of Sunday, February 25th, a Russian state television outlet which broadcasts a most popular weekly news report, amped up new cold war tensions between Russia and the United States.

The highly inflammatory rhetoric cited specific targets for nuclear attack which included operating and former military bases and presidential centers in the U.S.

These alarming specificities were accompanied by threats detailing Russia’s evolving nuclear capabilities such as the ‘Tsirkon’ (‘Zircon’) which has the power to strike within five minutes in response to any perceived provocation, if launched from a Russian submarine.

The new developments in nuclear weaponry are capable of what is known as ‘hypersonic flight’, which is considered to be roughly five times the speed of sound.

Reports from Kiselyov, which have taken on an escalating anti-U.S. tone, have gone as far as threatening to turn the United States into ‘radioactive ash’ – according to a Reuters report also released on February 25th.

Global environmental leader, Dr. Vandana Shiva weighed in on Democracy Now! on February 22nd during The War and Peace Report about the larger crisis, which is interwoven into every other crisis on the planet right now, concerning the need to collectively fight back against the global “1 percent” to stop “the sixth mass extinction”.

Directly addressing the situation in Venezuela in the context of her much broader analysis, Dr. Shiva noted:

“The 1 percent, of course, is the symbol of the concentration of wealth under the rules of neoliberal economies, that are basically, on the one hand, turning every natural resource into a war zone. Even the Venezuelan issue is really a war over oil”.

Her comments and the larger issue at stake here beg the question, in which brand of ‘democracy’ will Pachamama / Mother Earth finally get a vote?

Much of the activist community has been separating into different camps, choosing sides, no different really than the geopolitical hegemony – as portrayed in the map above.

This grassroots level divisiveness is no better. There is no such thing as a ‘lesser evil’ oil baron in these crucial times.

It is high time for the global environmental community to come together, joined in a united call for all world leaders to:

KEEP IT IN THE GROUND…

A little over a year ago in January of 2018 the MIT Technology Review designated 2017 as “the year climate change began to spin out of control”.

And global leadership, and even some grassroots movements, have been regressive on many fronts since then. With the election of Donald Trump, the world has seen what could have formerly only been imagined as a cumulative parody of ‘worst case’ moves on just about every angle in his ‘leadership’ on climate and the environment.

We have seen a Russian infiltrated ‘Yellow Vest’ movement take advantage of frustration with neoliberal economics in France to undermine the leadership at the heart of the Paris agreement. (At current, the movement has drastically lost momentum as President Emmanuel Macron’s original Russian backed opponent in the last presidential election, far-right Marie Le Pen, began overtly using the Yellow Vest movement as part of her political platform. The Yellow Vests also showed their truly suspicious colors during protests around ‘Brexit’, when the self-proclaimed, ‘leaderless’ movement put out statements repeated almost verbatim by Russian propaganda outlets and even Putin, himself).

It is time to collectively focus, and focus hard.

The United States is currently gearing up for a harrowing Democratic primary season to choose the best opponent to run against Donald Trump in 2020 – or for some, merely the best one to represent their pet political wedge issues.

This means many of the most devoted activists and environmentalists there are going to be caught up in nationalist causes such as healthcare, student loans, getting money out of politics, and a host of other platforms which should normally take center stage.

Unfortunately, the 2020 presidential battleground in the U.S. seems destined to be a distracting political sideshow at a time when the planet, and the U.S., can least afford it.

Even proponents of the long championed ‘Green New Deal’ have admitted it is not in true pace to counteract the reality of the burgeoning climate disaster, nor does it do enough to protect Indigenous communities on the frontlines of so many related environmental and energy infrastructural issues and crises.

And just this week, Venezuelan soldiers under the command of Maduro opened fire on an Indigenous community – killing two Indigenous persons – near the border of Brazil in a move directly related to the recent escalations over oil.

Brazil is dealing with its own political dumpster fire right now with the election of far, far, right Jair Bolsonaro.

Two days into his tenure, he passed control of Brazil’s 690 recognized Indigenous territories from (the already problematic at times) FUNAI to the Ministry of Agriculture. This swift move has raised serious concerns particularly for the more than 100 unconquered (sometimes referred to as ‘uncontacted’) tribes of the Amazon – and the ramifications for the vital biodiversity they have long been faithful stewards of.

As resource mongers continue to encroach on Indigenous territories in Brazil, there is indeed more of the same happening in La Moskita – a binational autonomous territory of Nicaragua and Honduras which holds the second largest tropical rainforest in the western hemisphere – where ‘Colonos’ have held the Indigenous frontier region under a violent siege since 2015.

On February 23, 2019 two Indigenous women were abducted by armed ‘Colonos’ in the frontier Indigenous community of Santa Clara – which IC visited in 2016, and is pictured, below. 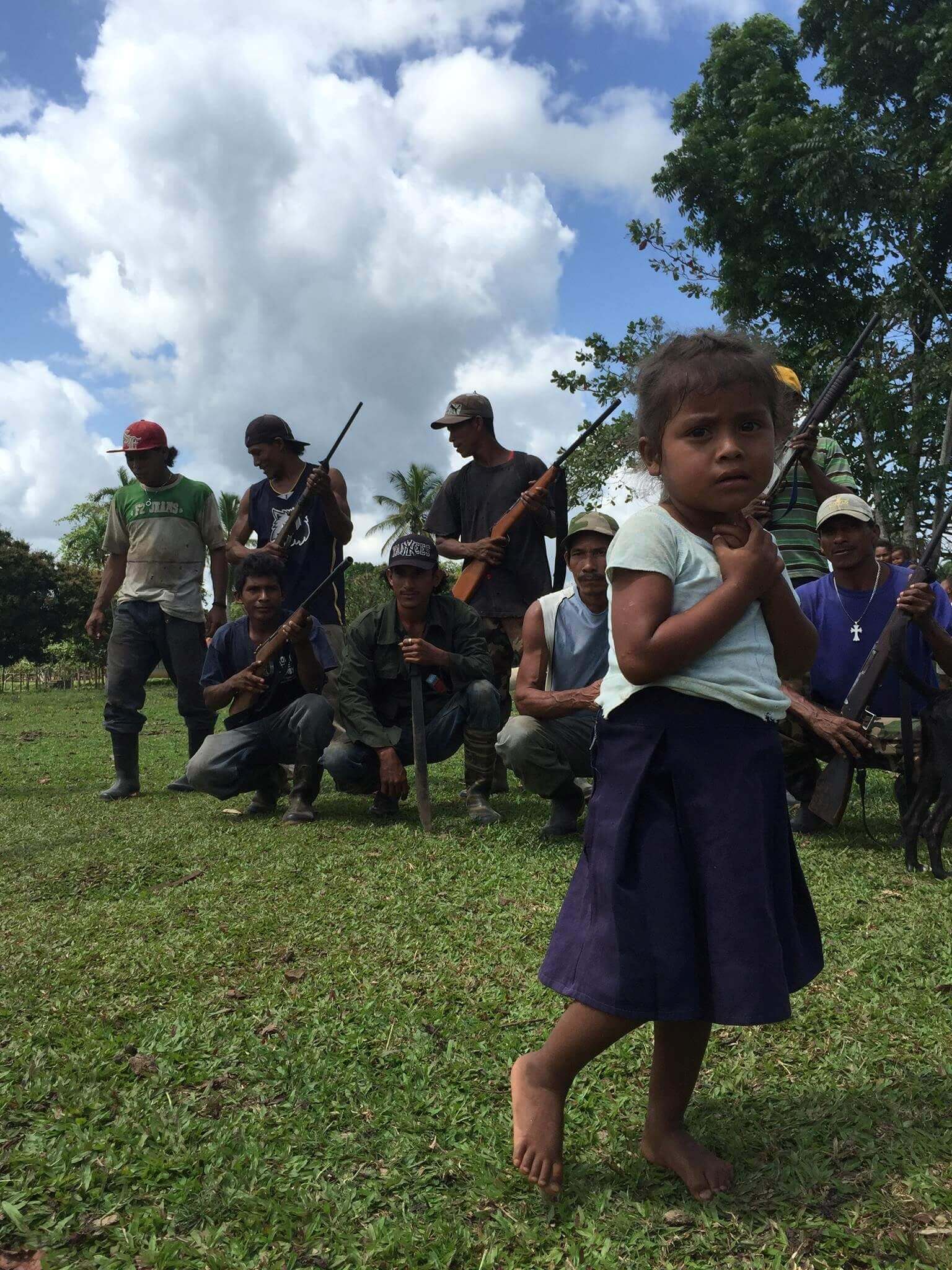 In the photo above, a group of community defenders display the fairly primitive weaponry they’ve acquired to try and fend off the invaders armed with high tech weaponry – weaponry which has been rumored to be sourced from the Nicaraguan government and traced even further back to Russia…raising questions about whether there is even a difference between the ‘Colonos’ and the paramilitaries now terrorizing the entire nation of Nicaragua and causing even former Sandinista supporters and fighters to flee in droves of tens of thousands.

The ‘secret’ – as referenced in this report by the World Resources Institute in 2016 – has long been out that Indigenous stewardship of land is the best and most practical strategy for mitigating climate change and resource depletion.

However, Indigenous Peoples like the Miskitu men above cannot fight this battle on their own. It’s easy to call for this solution, but there must be a mass, collective, backing for it with the teeth to actualize and operationalize it in the face of war-mongering, resource-greedy, hegemonic powers circling in like vultures from every corner of the globe.

There is a true international emergency at hand. And, it must be recognized and championed by people of every nation.

We need to stop what we’re doing, and…demand…that all world leaders, ‘Keep It In The Ground’… At this critical crux, it may be our only hope.

It is time to actively and deliberately choose our planet; and through that, choose peace…together.