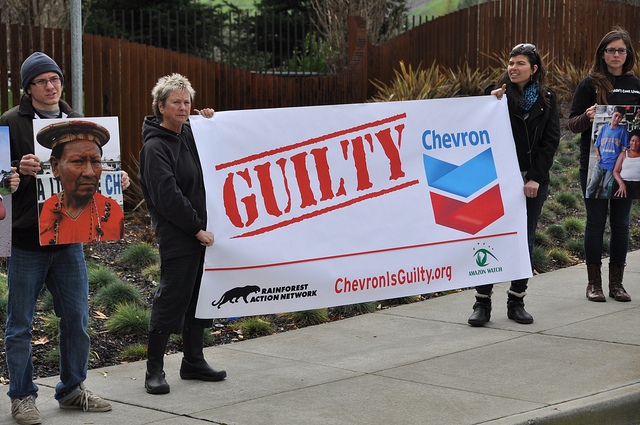 A court in Ecuador has found Chevron guilty of massive environmental pollution and human rights violations in the Amazon, and has ordered the company to pay $8 billion to clean it up. But Chevron has vowed to appeal the decision, and clearly plans to stall indefinitely, hoping never to pay its due. Photo: RAN
Support our journalism. Become a Patron!

After 18 years of legal struggles over one of the most tragic environmental crimes in history, a lone Judge has found that Chevron must now pay $8.6 billion to help restore the Amazon.

On February 14, Ecuador’s Superior Court Judge Nicolas Zambrano ruled that Chevron is legally liable for the 18.5 billion gallons of oil that now sits in the Amazon raiforest, a toxic legacy that some refer to as the “Amazon Chernobyl.”

“This is a great victory,” said Emergildo Criollo, a Cofan leader and plaintiff in the 17-year legal battle to clean up the deadly pollution, which has taken the lives of more than 1,400 people. “Our fight won’t stop until Chevron is held accountable and pays for all the damage it left in the Amazon Rainforest,” Criollo adds, in a statement issued by Amazon Watch.

In addition to the $8.6 billion, Judge Zambrano ordered Chevron to apologize for their wrongdoings by March 1, 2011 – or else they will have to pay another $8.6 billion.

It’s one of the biggest rulings ever handed down for environmental damages–second only to the $20 billion that British Petroleum (BP) was ordered to pay for the Gulf Oil Spill. “[It’s also] the first time an American company has been held accountable in foreign courts for environmental crimes abroad,” says Amazon Watch.

“This is a great moment for the thousands of Ecuadorians who have waged an epic battle to hold Chevron accountable for one of the worst oil-related disasters on the planet,” said Kevin Koenig, the Northern Amazon Coordinator at Amazon Watch. “This verdict vindicates what indigenous peoples and local residents have been saying, and suffering from, for decades- that Chevron drilled, dumped, and never looked back.” 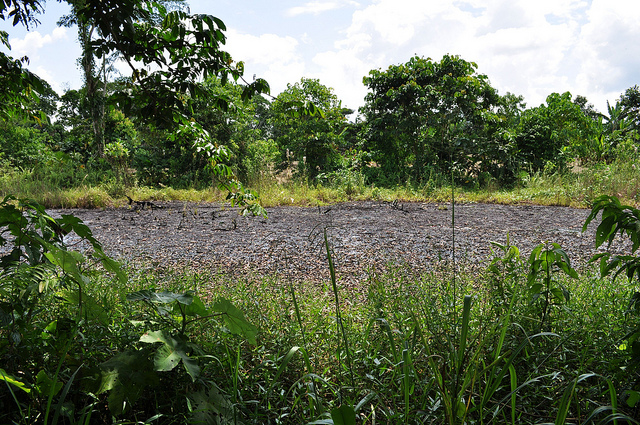 one of hundreds of waste pits filled with crude oil and other toxic chemicals that sits open in the Amazon region. Photo: RAN

Unfortunately, the heart-wrenching battle to clean up the Amazon is still far from over. Chevron has made it clear that it will do everything in its power to overturn the ruling.

Company lawyers have already “pledged… to appeal against the fine through every conceivable legal avenue, on at least three continents,” notes the Independent. So far, they’ve filed counter-suits and appeals in six different U.S. courts and requested “clarification” over the ruling from Ecuador’s Courts. The lawyers also announced that Chevron has no intention of apologizing for their actions.

Needless to say, Chevron’s actions are par for the course; but only because the company has always been more interested in playing dirty games than taking responsibility for the biggest oil spill in history.

In any case, we can be sure that the Indigenous Peoples effected by the spill–and their allies—will keep pushing for Justice: a day in the Ecuadorian Amazon when the air smells clean, the crops grow in abundance and the water won’t kill you and your children. 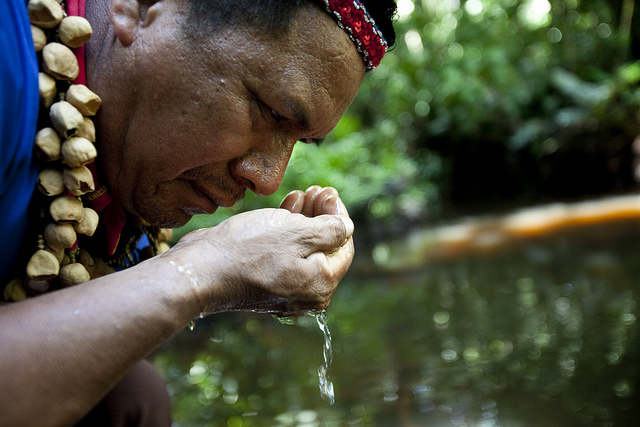 Laura Mendo, 59, recalls a time when the Cofán wandered freely and lived off the land. Now the rivers are contaminated, crops don’t grow, and new illnesses and cancer have been introduced. Photo: RAN

Tell Chevron to Stop Playing Games! Head over to ChevronIsGuilty.org and urge the company’s CEO to respect the court ruling and do his part to clean up Ecuador.