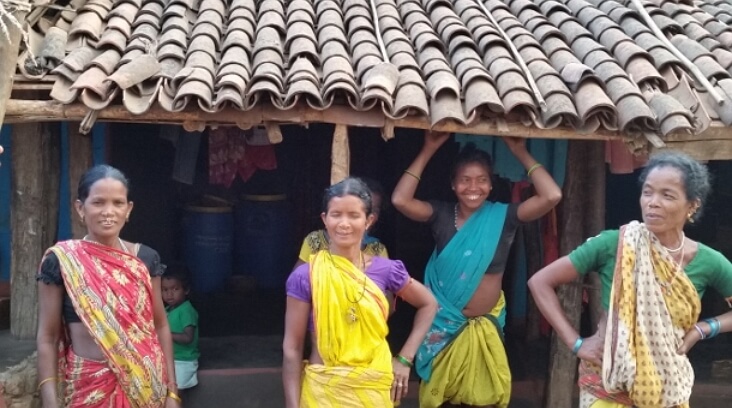 Inside the indigenous movement to protect India’s commons

In early October, news emerged that India’s Ministry of Environment, Forest and Climate Change was blocking the implementation of a high-level government panel’s report on tribal rights that recommended the creation of stringent rules to safeguard indigenous people from displacement.

Meanwhile, two state governments have begun implementing a much different set of guidelines — issued in August without any interference — that allow the private sector to manage 40 percent of forests for profit at the expense of indigenous forest dwellers. In addition, another ordinance passed this year will permit private corporations to easily acquire land and forests from indigenous communities and carry out ecologically harmful mining. These legislative and policy decisions are usually made without the knowledge of indigenous communities whose lives, livelihoods and ecosystems will be worsened by these irresponsible actions of the government.

Hence, indigenous communities in Uttar Pradesh, a northern state and Odisha, in the east, are strengthening their organizing to protect their rivers, lands, forests and hills from “development” that would displace thousands of local residents and destroy the environment.

“People from my community and I were beaten, detained or jailed unnecessarily for opposing tree felling in our forests, some years ago,” said Nivada Debi, a feisty 38-year-old woman from the Tharu Adivasi community in Uttar Pradesh. “We visited the police station multiple times for their release. The government did not assist the injured. Despite the police and government indifference, we will fight for our land and environment.”

A mother of four children subsisting on the forests, Debi is active in grassroots resistance that started nearly 20 years ago and has grown into the All India Union of Forest Working People, or AIUFWP. The group is made up of many indigenous people who subsist on forests and are collectively protecting forests from poachers and encroachers. 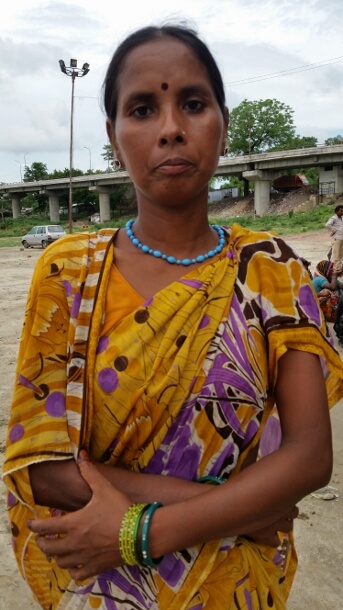 Nivada Debi at the Lucknow rally against the imprisonment of the opponents of the Kanhar dam in July 2015. (WNV/Pushpa Achanta)

Debi was among hundreds — from the AIUFWP, the allied Save Kanhar Movement and other resistance groups — who traveled to Lucknow in July 2015 for a rally protesting the continued incarceration of their comrades fighting land grabbing in other districts of Uttar Pradesh. Roma Malik, the AIUFWP deputy general secretary, and Sukalo Gond, an Adivasi, which means original inhabitant, were among those arrested on June 30, before they were to address a large public gathering about the illegal land acquisition for the Kanhar dam and the violent repression of its opponents by the state. Another member of AIUFWP, Rajkumari, who prefers to go by her first name, was jailed on April 21, after 39 Adivasis and Dalits, who are considered outside the caste hierarchy, were brutally shot at by the police during a peaceful protest on April 18. The demonstration, which began on April 14 — the birthday of B.R. Ambedkar, the architect of the Indian constitution and an icon for many Indians, particularly Dalits — was opposing the construction of a dam across the Kanhar river in the Sonbhadra district of southeastern Uttar Pradesh.

Rajkumari was released toward the end of July while Gond and Malik were freed in September. However, others are still imprisoned on fabricated charges. Courts are delaying hearing their cases or denying them bail.

AIUFWP members, some of whom were previously involved with other local resistance movements, have been actively opposing the construction of the Kanhar dam for years. It would submerge over 10,000 acres of land from more than 110 villages in Uttar Pradesh and the neighboring states of Chattisgarh and Jharkhand, displacing thousands of local people and disrupting their lives and livelihoods. The dam was approved by the Central Water Commission of India in 1976, but was abandoned in 1989 after facing fierce opposition, especially from the local people whose lives and ecosystem would be destroyed by the proposed dam. However, construction resumed in December 2014, violating orders to stop it from the National Green Tribunal — a government body that adjudicates on environmental protection, forest conservation and natural resource disputes. No social impact assessment was done, nor were the necessary environmental or forest clearances — mandated by the Forest Conservation Act — obtained by the state government.

“Since this dam can destroy our survival and also adversely impact the surroundings, we have been opposing its construction and related land acquisition for many years,” said Shobha, a determined 42-year-old Dalit. “On December 23, 2014, the police caned some of our comrades when we were peacefully protesting the revival of building the dam earlier that month. However, the police falsely accused some leaders of our struggle of attacking the sub-divisional magistrate.” Shobha, who also prefers to go only by her first name, is among the vocal leaders of a women’s agricultural laborers union, which has allied with AIUFWP, in the village of Bada. 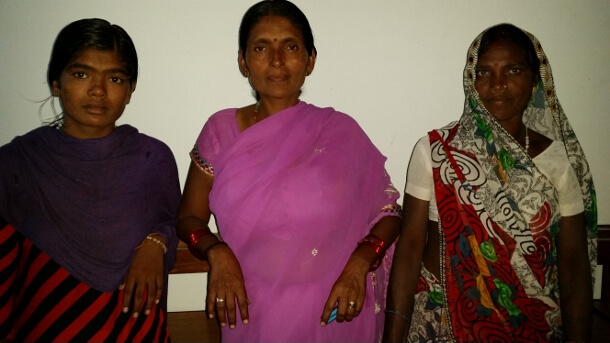 Shobha (center) with daughter Deepika (left) and associate Rekha (right) before the Lucknow rally against the incarceration of the opponents of the Kanhar dam in July 2015. (WNV/Pushpa Achanta)

Around 400 miles from Sonbhadra, in the Kalahandi and Rayagada districts of southern Odisha, live the Dongria Kondhs, an indigenous community of over 8,000 people. They have been fighting tirelessly to protect their sacred mountain, the nearly 5,000-foot high Niyamgiri, from large private corporations — like Vedanta Limited — that are trying to mine bauxite in the area to produce aluminum. Supporters of the Dongria Kondhs were arrested in Delhi on August 9 outside the Reserve Bank of India, as they peacefully highlighted Vedanta’s illegitimate and harmful mining in the Niyamgiri. Vedanta’s mining would violate the Forest Rights Act, which states that indigenous communities are entitled to remain in the forests — and utilize the produce, land and water in the forests — while conserving and protecting them.

“The Niyamgiri symbolizes a parent to our community,” said Sadai Huika, a steadfast 45-year-old Dongria Kondh woman from Tikoripada village. “While the streams that originate from it help our farming, the plants and grass that grows on it feed our cattle and goats. We cannot exist without it and will safeguard it from anyone trying to harm it.”

Huika and people from hundreds of villages near the Niyamgiri are active members of the Niyamgiri Protection Forum, which originated around 2003 to resist attempts by Vedanta to begin mining where the Kondhs live, with the support of the Odisha state government. At every one of the 12 village council meetings with government officers held in 2013 atop the Niyamgari, community members stated that they would not allow mining nearby.

Kumuti Majhi, an elderly Dongria Kondh man and one of the forum’s leaders, is among the few people who have traveled within and outside Odisha to advocate against mining and garner vital support for their struggle. He has met ministers to explain how significant the Niyamgiri is to his community and their reasons for safeguarding it.

By organizing protests locally and with allies around the world — and meetings with Vedanta’s shareholders and empathetic government officials, who the forum has enlightened about the need to protect the Niyamgiri — the group has stalled the mining.

“We know that extracting bauxite from the Niyamgiri will pollute our environment and also affect all living beings here,” Majhi said. “Hence, we will stop anyone coming to plunder the Niyamgiri, despite police harassment and false charges against us and our families.”

Article originally published at Waging Nonviolence. Re-published at IC under a Creative Commons (CC BY 4.0) License