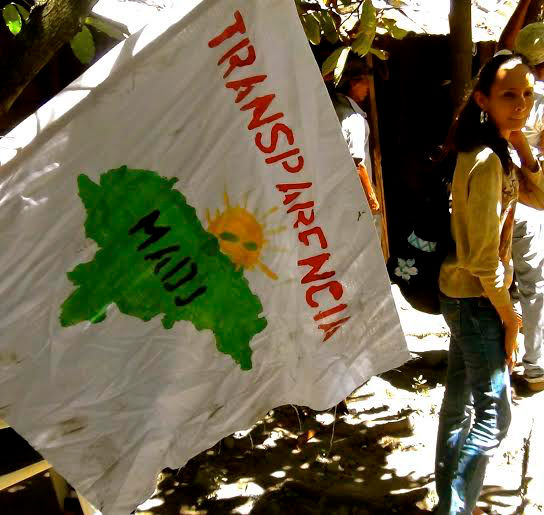 Indigenous Tolupanes Return to Their Territory with IACHR Orders of Protection

A caravan makes its way up the dusty winding road into the mountains of the department of Yoro. It is heading toward San Francisco de Locomapa, one of the territories of the Tolupane people, an indigenous tribe that has been in existence for over 5,000 years. San Francisco is also the site of a massacre that occurred on August 25, 2013. Armando Fúnez Medina (46), Ricardo Soto Fúnez (40), and Maria Enriqueta Matute (71) were murdered by Selvin Matute and Carlos Matute (no relation to Enriqueta). The latter two are hired guns for the Bella Vista Mining Company, which has been extracting antimony from the surrounding mountains without the consent of the community and with a mining concession that is in dispute. The two men also hire themselves out to illegal loggers that deforest the mountainsides. The three victims were members of the Broad Movement for Dignity and Justice (MADJ, in its Spanish acronym), which has been protesting the mining and illegal logging and the installation of a hydroelectric dam on Tolupane territory. The community had begun a roadblock on August 12, 2013 stopping trucks that were loaded with illegal timber and antimony and then reporting it to the local police who essentially let the illegal trucks and their cargo go.

The caravan carries members of MADJ, as well as representatives of: the Women’s Forum of Life of San Pedro Sula; ERIC-SJ/Radio Progreso from El Progreso; Counsel of Grassroots Organizations of the Aguán (COPA); the Permanent Observatory of Human Rights of the Aguán; members of the Black Fraternal Organization of Honduras (OFRANEH); the Women’s rights group Academic Feminists; the Coalition Against Impunity, and International Human Rights Observers from PROAH; and the Honduran Solidarity Network. They are all there to accompany six returning MADJ members of the San Francisco community who, along with twelve others, fled the territory six months ago after the massacre.

It is a bittersweet reunion. The tears of the joyous reunion are mixed with those of grief for the three that were gunned down. MADJ has convened this convocation to both honor the martyrs and to formally have official representatives of the Republic of Honduras sign the Act of Implementation of Protective Measures that were ordered on December 19, 2013 by the Inter-American Commission of Human Rights (IACHR). The District Attorney from the Public Ministry of Yoro is present as is a representative of the National Commission of Human Rights, the Sub-Commander of the National Police of Yoro and The Department of Human Rights of the Inspector General. Indeed, after decades of indifference to the plight of the Tolupanes it was not until the IACHR intervened that anyone from the Honduran government paid any attention. This new attention is a testament to the dedication of MADJ and the members of the community that have maintained the struggle to defend their natural resources. Some 38 members of the community are protected by this act, but it is a hollow gesture if the representatives of the government don’t abide by it, which has historically been the case in Honduras.

It is difficult to know the exact figure of how many Tolupanes have been murdered. MADJ reports that since 2002 at least nine members of the Tolupane tribe in San Francisco alone have been assassinated. The U.S. Department of Justice issued a report in 2000 that put the figure at just over 43 murdered indigenous people across the country, among which includes Tolupanes.

Numerous indigenous activists have been killed with impunity by gunmen evidently in the pay of large landowners—at least 43 in the last five years alone, according to indigenous and Honduran rights organizations—and in a number of cases there has been evidence of involvement of military and police personnel. Murdered activists have come from a number of different indigenous groups, including the Lenca, Maya-Chortí, Tolupán, Xicaque, and Garífuna.

Additionally, in 2005, a U.N. Commission on Human Rights denounced that landowners reportedly killed at least 58 Tolupanes for opposing the invasion of their lands.

The Secretary for Ethnic Development of Honduras also reports the crime of 57 Tolupanes murdered:

Approximately 57 Tolupanes leaders have been killed, crimes in which there have been no punishment for the perpetrators and masterminds, which makes them the most martyred of the nine tribes of indigenous people that still exist in Honduras.[1]

At the convocation, Yani del Cid from the Office of the Special Prosecutor for Ethnic and Cultural Heritage announced that arrest warrants have been issued for the Matute Gang, as the thugs who did the killing are referred. They are known to the police and yet they are still at large, living in the nearby community of Las Brisas, but it has been several months since anyone in San Francisco has seen them. It is suspected that they travel at night.

The National Police have a station in the neighboring town of El Ocotal, but they don’t have any vehicles of their own. It is a forty-five minute walk each way between El Ocotal and San Francisco. Sometimes they go on patrol using the Municipalities trucks and sometimes using the pickups of the mining company, the same one that hired the Matute Gang to intimidate the protesters. The Police Chief of the Department of Yoro, Wilfredo Ventura, stated at the convocation that staff shortages and lack of resources will impede the police from being able to carry out the orders of the IACHR.

Not all from the community that were forced to flee have returned despite these orders of protection. One of the MADJ coordinators of San Francisco, Jose Maria “Chepito” Pineda still fears for his life after the gunmen posted a death threat to the door of his house on September 2nd of last year. The note stated:

To Chepito and family: Today yes, get ready because the fire’s been lit, because you haven’t curbed your tongue. We know where you are but we’re going to get you where it hurts most. You don’t know who you’re messing with, so it’s best if you get ready. We’re giving you due warning. We don’t think twice about eliminating people, even less so rats which are only good for fucking with. Yours sincerely, your enemies!

Chepito’s wife and children continue the struggle, working the land that sustains them and tending to the tilapia pond behind their house. Señora Pineda states, “We aren’t going to give up the struggle to keep our natural resources clean and in the hands of the community. There are those who want easy money by tearing up the land, contaminating the water. We have been here respecting the earth that gives us our food and we intend to stay here fighting for our right to feed ourselves.

At the end of the convocation, three tree saplings, two pines and one cypress, were planted near the site of where Armando, Ricardo, and Maria Enriqueta were killed, a symbolic act of remembrance of the three martyred comrades and an acknowledgment that we are all bound to the earth and its natural resources.