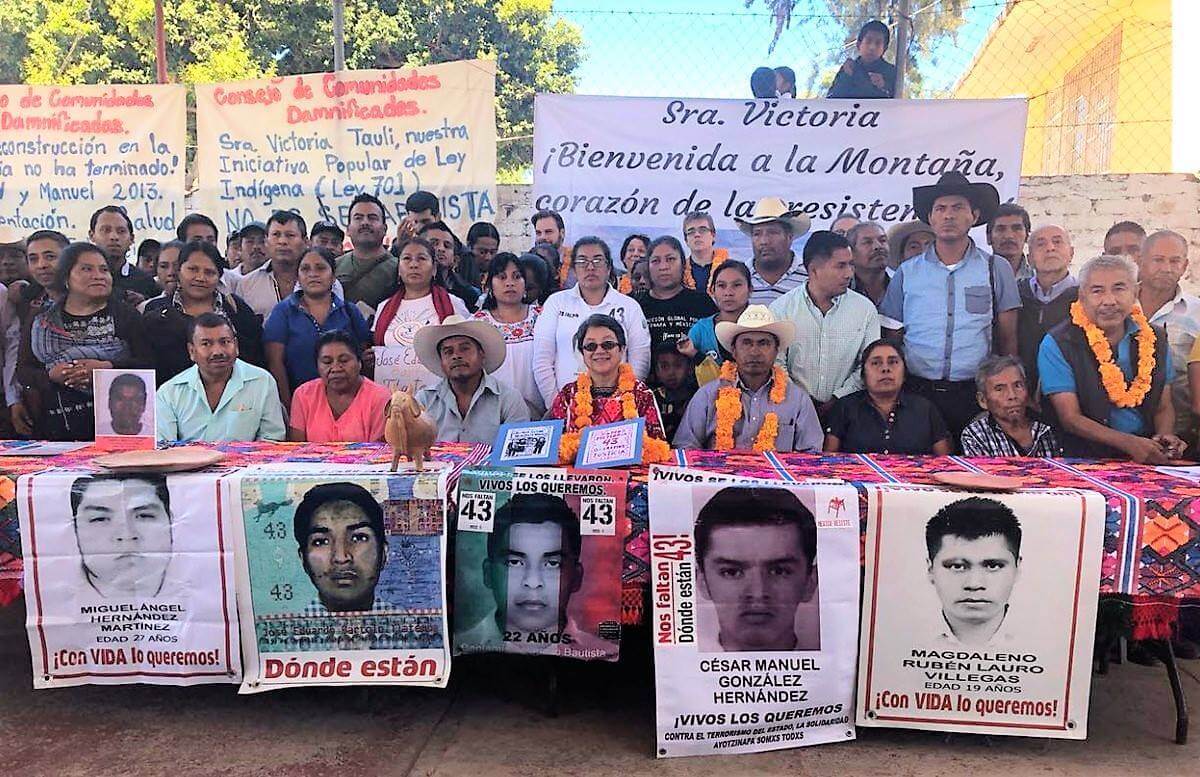 Indigenous rights, the UN and NAFTA

Once again, officials from the United Nations (UN) are on tour in Mexico to get up close and personal with the situation that the population is going through concerning issues that have made this country famous, for occupying the first place in the world in terms of the violation of human and labor rights, official violence, the abuse of companies, corruption with its inseparable impunity and environmental depredation at the expense of native peoples.

From Nov. 8 to 17, the UN Rapporteur for the Rights of Indigenous Peoples in Mexico, Victoria Tauli-Corpuz, an indigenous Filipino, is visiting the states of Chihuahua, Chiapas and Guerrero to learn about the problems faced by indigenous nations. Upon her arrival on Nov. 8 in the country, in a press conference, she was given The Report on the Situation of Indigenous Rights in Mexico, which offers comprehensive information on the matter.

Victoria Tauli-Corpuz will also meet with officials of half a dozen state agencies and attorney generals’ offices, as well as the National Electoral Institute, among others, to discuss the issues of discrimination, autonomy and indigenous territories, harmonization of domestic legislation, megaprojects, access to justice and impacts of violence on women and indigenous peoples.

Indigenous peoples will particularly insist on the public consultation process that should be carried out before any business or government project is undertaken in their territory, which is almost never done, and when it is done, it is when the investment is already underway. Furthermore, if it is carried out, it does not comply with international guidelines, and its results are almost never respected by the Mexican authorities and are generally falsified.

The visit of the representative of the UN occurs just at the moment when the National Indigenous Council has complained of discrimination by the INE towards its independent candidate for the presidency of the Republic, María de Jesús Patricio, Nahua, who was denied by the bank the right to open an account, and then had to face obstacles such as the registration of her supporters’ cell phone numbers – this for a bunch of rebels who barely have enough to eat, and who lack adequate infrastructure and even the telephone device itself.

In particular, I criticize the fact that the recommendations of the various UN offices, although sometimes correct, are not binding on the Mexican legal system, nor on the political system, and are not mandatory, although they do exhibit the rottenness of the Mexican political system as they promote the articulation of the various indigenous struggles that take place in the national territory and with their peers in other countries.

For example, Mario Luna, leader of the Yaqui tribe, in Sonora, has said that when these visits are made, the Mexican government brags about the advances it has made in favor of the indigenous peoples, but in reality the harassment and criminalization of the peoples for defending their resources is an everyday occurrence; furthermore, the legal resolutions in their favor are never obeyed, nor respected.

In accordance with the procedures of the missions of the UN personnel in any country, at the end of her visit, the Rapporteur will present a report to the UN Human Rights Council in which she will share her observations and recommendations, for the agency to consider in order to evaluate compliance with the international obligations of the Mexican State under the United Nations Declaration on the Rights of Indigenous Peoples and all signed international treaties on the matter.

A cluster of environmental, social, academic, community and human rights organizations anticipate that they will present the most representative cases of assault to which they are subject in their daily life, which put their existence at risk as peoples and communities, as a culture and as indigenous peoples of Mexico.

They mention the various forms of dispossession of the territory and natural assets; megaprojects that violate the rights of indigenous peoples; discrimination; aggressions, displacement and insecurity due to the defense of the territory and the growing violence in the country; and impunity and obstacles in access to justice.

A matter of paramount importance, necessarily obligatory, is to demand the participation of the indigenous peoples in the current negotiations of the North American Free Trade Agreement (NAFTA), since they are the ones that suffer most due to the unbridled commerce caused by patterns of intensive consumption that require the imposition of megaprojects in their territories.

Mexican indigenous peoples play an important role in the operation of NAFTA not only because of the species of flora and fauna, oil, minerals, wind and water from their territories that are being plundered, but also as migrants to the United States and Canada, they help to enable the international competitiveness of these countries through the surplus value they generate by the exploitation to which they are subject.

Even if NAFTA ended, which would be the best-case scenario under the conditions under which it now functions and threatens to continue functioning, globalization will not die; its veins are already deeply rooted in the bowels of the planet. But the hope is that the globalization of indigenous struggles will continue, in such a way that their articulation will reach new trinational dimensions, but also continental, as is already occurring.

In general, the indigenous peoples of the American continent are passing through the same difficulties, with greater or lesser intensity, and the cases of dispossession and aggression paint a portrait of neoliberalism that will be presented to the UN official and are emblematic of the region: Las Cruces hydroelectric power station, in Nayarit; the planting of transgenics in the Yucatan Peninsula; the impacts of violence and devastation of forests in Chihuahua; the Independencia Aqueduct in Sonora; Eólicas del Sur in Juchitán; the hydroelectric project in the Sierra Norte de Puebla; the mining company of San Miguel del Progreso in Guerrero; the systematic torture and arbitrary deprivation of liberty, as well as the lack of justice, in Chiapas in a context of low intensity warfare; the impact of earthquakes in Chiapas; and discrimination in public policies that keeps indigenous peoples impoverished, among others.

Tauli Corpuz has expressed an interest in the situations of exclusion and violence that indigenous women experience in Mexico, and has assigned special spaces for dialogue with women whose rights have been denied. They are sharing with her cases of feminicide, obstetric violence, maternal death, forced sterilization, defenders of human rights at risk, among others.

Since 2003 when the then-Rapporteur Rodolfo Stavenhagen made a visit to Mexico and witnessed the serious situation of the violation of the rights of indigenous peoples, and 14 years after that visit, “the situation of indigenous peoples has not improved. On the contrary, the structural causes responsible for the dispossession and aggressions that they live day by day have intensified and the non-state actors, especially the mining companies, that contribute to this have multiplied,” he said.

Now in 2017, in a press release on Nov. 8, the member organizations of the Tiyat Tlali Council denounced that at the national level the Energy Reform legalized the privatization and commodification of water, land and nature, a fact that has provoked an increase in socio-territorial conflict throughout the country mainly in indigenous regions. They said that this is not alien to the area of ??the Northern Sierra of Puebla, as from 2011 to date there is a high concentration of megaprojects: in mining, as of December 2016, the Ministry of Economy had granted 189 titles of mining concessions, which is equivalent to 372,408 hectares, and although no metal ore project is still in operation there are six exploration projects, all of Canadian capital. The most advanced is the open-pit mine of the Canadian Almaden Minerals in the municipality of Ixtacamaxtitlán, the organization said.

The press release added that non-metallic mining in Puebla has also caused strong impacts, such as the extraction of feldspar in the Zacatlán region by Materias Primas de Ahuazotepec, a subsidiary of the Belgian company, Sibelco; In addition, the hydroelectric projects projected in the basins of the rivers that cross the Sierra Norte de Puebla, add up to 14 that already have pre-feasibility studies, which will generate energy for various private companies, as is the case of the Puebla Hydroelectric Project that aims to generate electricity for Walmart. Regarding the extraction of hydrocarbons, they explain that the Ministry of Energy has authorized concessions for unconventional exploration in about 35 municipalities and is part of a comprehensive infrastructure plan that seeks to encourage industrial production, urban consumption and private profits, which imply territorial dispossession and the intimate relationship of projects in the region, because while fracking and mining require high amounts of energy, hydroelectric plants generate it.

This is due to the construction of the project “High Tension Line Cuetzálan Link Teziutlán II-Tajín”, or the construction of gas pipelines by companies such as Gasoductos Mexicanos SA de CV, or the “Tuxpan-Tula” gas pipeline of the TransCanada corporation to import gas from Texas. For this reason, they request the Special Rapporteur on the Rights of Indigenous Peoples to take cognizance of and take the necessary actions to urge the Mexican State to respect and guarantee the rights of indigenous peoples in the country and in the Sierra Norte de Puebla.

Miguel Angel Torres is a freelance writer based in Aguascalientes, Mexico.