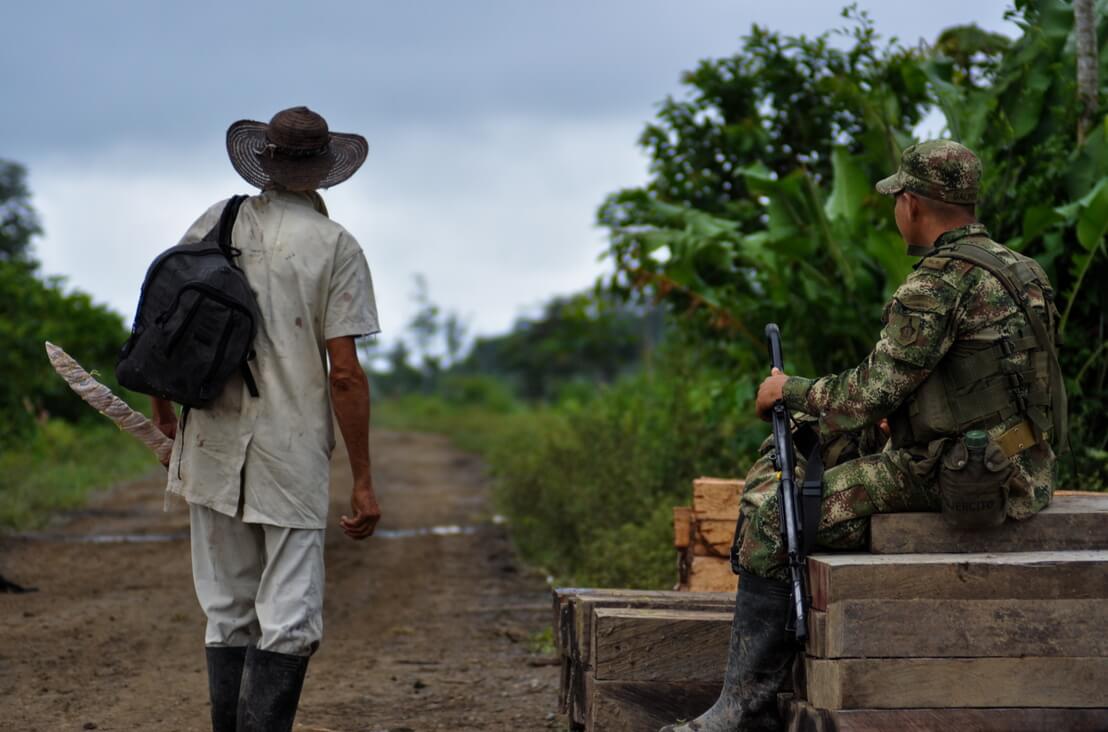 This short documentary filled with breathtaking cinematography and steeped in the courage of indigenous people who put their lives on the line to defend territory, culture, and human rights; tells the tales of violence, displacement, and resistance from four different Wounaan Indigenous communities along the San Juan and Calima Rivers in the Colombian departments of El Choco and Valle de Cauca. Here the communities, with the help of the Intereclesial Justice and Peace Commission, have been organizing by creating Indigenous Humanitarian and Biodiversity Reserves. “ The humanitarian reserve is a protection mechanism of our life in our territory [in the middle of a conflict zone], it’s an exclusively civilian space from which we assume the responsibility of working for peace and not being involved in the armed conflict.” The biodiversity reserve allows the community to recuperate traditional flora and fauna that has been lost during the conflict and begin to once again produce from the land and strengthen food autonomy.

This short is part of a film series in the multi-media campaign “Longing for Peace,” which was created to widen the conversation around how meaningful and lasting peace in Colombia and around the world can be built. It aims to amplify the hopes, dreams, aspirations, struggles for and visions of peace that Colombian people have.

Historical Context of the Zone
Historically the FARC guerillas have controlled the territory  surrounding the San Juan and Calima Rivers. However,  paramilitaries are fighting to take it, so the FARC are letting  the ELN guerillas in to stop the paramilitaries from taking control. In 2005 the paramilitaries were unsuccessfully demobilized.  They remain armed and in control of vast swaths  of Colombia, including the Calima and San Juan Rivers. Currently the Colombian Government is in peace talks with the FARC Guerrillas,  but forced displacement and dead bodies floating down the rivers continue.

Failed Paramilitary Demobilization
In 2005, Colombia signed into law the Justice and Peace Law. This legal framework was put into place in order to demobilize the Paramilitary Self Defense Forces of Colombia. Furthermore, it aimed to provide truth, reparations, and justice for victims of the armed conflict. However, not only is there strong evidence that the state fell short of achieving these goals, in fact many consider that the demobilization process in and of itself was a failure. Paramilitary structure and strategies did change, but many of these groups remain armed and continue to profit by protecting the business interests of elites through terror and violence. Some continue to call them paramilitaries, while others refer to them as BACRIM and neo-paramilitaries. November 2012, the Colombian Government entered into peace talks with the FARC guerillas. While this is widely recognized as an important step toward peace, there are numerous criticisms that should not be dismissed. Among them, communities manifest that the armed conflict is complex and dynamic, fueled by multiple illegal and legal armed actors. They fear that human rights violations will continue, if peace is not negotiated between the government and all armed actors. Asserting that if one group lays down its weapons, the other armed actors not in negotiations, including neo-paramilitaries, will fill the power vacuum at the end of the peace process. In fact, since the start of the peace talks human rights violations have been on the rise.

Human Rights Situation of Colombian Indigenous Peoples
Indigenous communities are disproportionately forcibly displaced. Since Indigenous economic, social and cultural practices are so intricately connected to their territory, forced displacement not only tears Indigenous communities from their homes and lives, it threatens the very existence of their culture.

There are 84 different Indigenous groups with 68 different languages who account for 3.3% of the population. While the national average of chronic malnourishment among children is 12%, this figure skyrockets to 90% in indigenous communities along the Pacific Coast. Historically indigenous communities have lived on land that is rich in natural resources and subsequently, their land has been targeted by multinational corporations seeking to profit from those natural resources. Indigenous communities have autonomy over their territory and by law are entitled to what is termed “previous consultation,” meaning that multinational corporations must seek the community’s permission before implementing projects in indigenous territory. Often times this law is not observed. Indigenous communities are disproportionately displaced from their territories. According to ONIC 18 of the smaller Indigenous groups are at risk of disappearing all together. April 10th, 2016, 466 Wounnan Indigenous displaced from the community of Pichima Quebrada, Chocó because of military operations against the ELN guerillas.