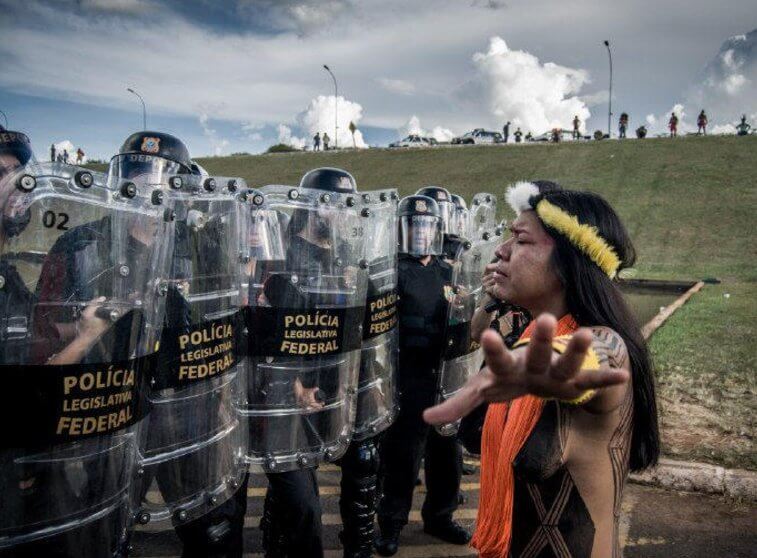 Brazil’s Supreme Court made two key decisions that strongly favored the country’s indigenous communities Wednesday, rulings that appear to refute the current administration’s recent attempt to link all indigenous land claims to an arbitrary 1988 occupation date, rather than to a long history of documented occupation, as required by Brazil’s Constitution.

The court ruled that both of the civil actions that the Mato Grosso state government had brought against the indigenous agency, Funai, were inadmissible. About a hundred Indians, gathered in the courtroom, greeted the decision with cheers. Outside the building, dozens of Indians, who had spent the night waiting in Brasilia’s central square (the Praça dos Três Poderes), celebrated noisily.

In both cases, the Mato Grosso government claimed that federally established indigenous reserves had been set up on land that belonged to Mato Grosso state, and that had not been traditionally occupied by the indigenous people living there today. Through ACO 362, Mato Grosso claimed compensation for land the federal government used to establish the Xingu Indigenous Park, created by the Villas-Boas brothers in 1961. Through ACO 366, Mato Grosso claimed compensation for land federally demarcated as indigenous territories for the Nambikwara, Pareci and Enawenê-Nauê Indians in the 1980s.

Judge Marco Aurelio Mello said that there was enough evidence to show that indigenous communities had occupied the area of the Xingu Indigenous Park for at least 800 years. Judge Alexandre de Moraes concurred: “Indigenous communities cannot be denied this traditional settlement. Funai does not need to compensate the state for the use of its own lands.” Similar statements were made with respect to the Nambikwara, Pareci and Enawenê-Nauê reserves. The Mato Grosso state government was ordered to pay Funai’s legal fees.

The rulings are a major setback for President Michel Temer, who had openly supported the state government claims, reportedly under pressure from the powerful bancada ruralista agribusiness lobby in Congress on whom he depends for his political survival.

But the rulings did not directly address the controversial “marco temporal,” the recent recommendation made by the Attorney General’s office and signed by President Temer, stating that indigenous groups should only have the right to legally claim land if they were physically occupying it on 5 October 1988, the day the current Brazilian Constitution was promulgated. If this recommendation is applied throughout Amazonia, scores of indigenous communities, forcibly evicted from their land during the military government (1964-1985), will lose their land rights.

However, all members of the Court, with the exception of Chief Justice Gilmar Mendes, indirectly rebutted the idea of a 1988 cut-off, by clearly stating that the basis of “traditional occupation” — which the Indians must demonstrate to have their land rights confirmed — is founded on very different criteria. “The vast majority of the ministers of the Supreme Court reaffirmed that the concept of traditional occupation is related to the way they [indigenous people] have occupied their land, and is based on legislation much earlier than the 1988 federal Constitution,” said Cleber Buzatto, the director of Cimi, the Catholic Church’s Missionary Indigenous Council.

Rafael Modesto dos Santos, legal consultant at Cimi, said that in his view the rulings were a serious setback for the federal government: “Despite not being directly examined in the rulings, the concept of the marco temporal was severely damaged and the indigenous communities have been strengthened. This directly affects the recommendation from the Attorney General’s office signed by Temer.”

Minister Luis Roberto Barroso made it clear, in his vote, that he opposed the marco temporal: “In my understanding, traditional indigenous occupation will only lose its validity if it is demonstrated that the Indians voluntarily left their territories or it is shown that their cultural links with the area have been broken.”

Chief Justice Gilmar Mendes, the main advocate for the marco temporal, was not allowed to vote on ACO 362 because he had already made his position clear in the 1990s when he was Attorney-General and, at the time, believed that the state government was wrong in its claim. As a result, the vote on ACO 362 was unanimous.

Although he was the last to speak and was thus defending a lost cause, Mendes made a long speech that denigrated indigenous land rights, saying that, without the marco temporal, “we will end up handing back Copacabana [Rio’s most famous beach] to the Indians.”

Luis Enrique Eloy, a Terena indian and lawyer for the Articulation of the Indigenous People of Brazil (Apib), expressed a different view: “The Supreme Court decided that these lands never belonged to the Mato Grosso government, and it’s impossible to ignore the presence of the Indians,” he said.

Though important, it is unlikely this week’s decisions will be the final word on the marco temporal, but experts suggest the rulings may cause Temer and his rural caucus allies to pause for thought and to reconsider their strategy. Although Brazil’s top judges have often been overruled by the executive in recent years, they are still a power to reckon with, and able to put a check on perceived presidential excesses.

This article was originally published at MongaBay. It has been re-published at IC under a Creative Commons License.