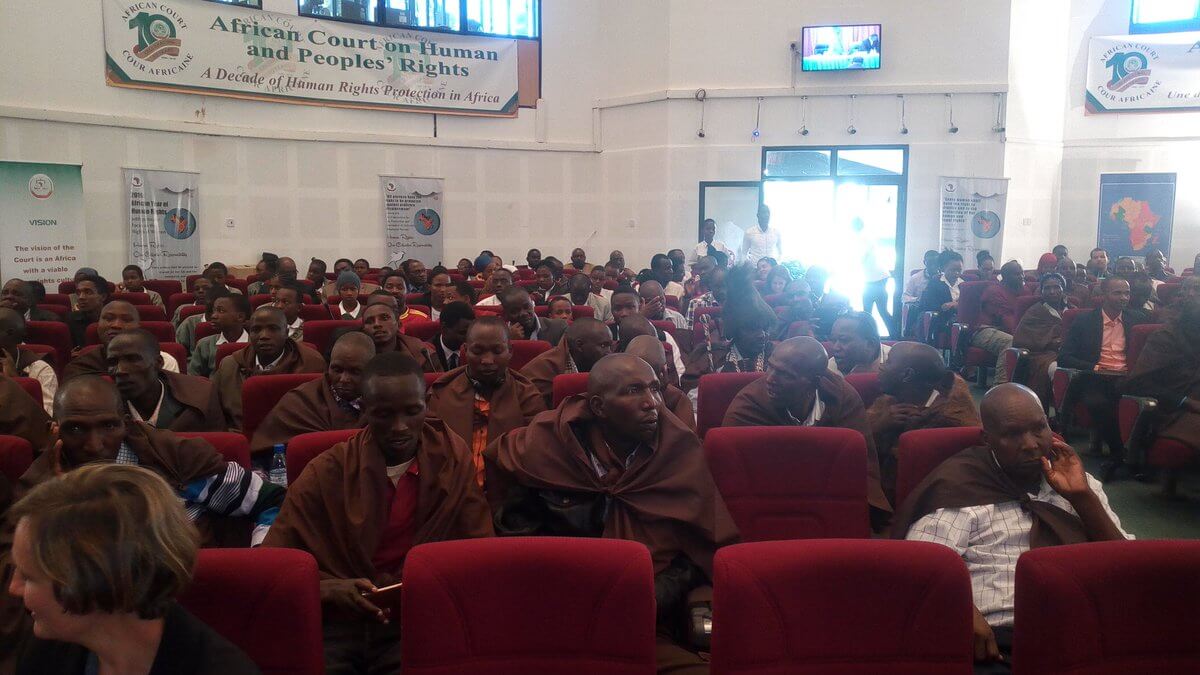 The Ogiek preparing to receive the African Court's landmark decision after awaiting close to a decade. Photo: Andrew Songa on twitter @drewfremen
Support our journalism. Become a Patron!

The African Court on Human and Peoples Rights, at its 45th session on May 26, 2017 in Arusha, Tanzania, delivered a long-awaited and unanimous judgement against the Kenya government in a case brought before it by the Ogiek Indigenous Peoples.

The African Commission on Human and Peoples Rights had filed the case after the applicant proved consistent violations and the denial of the human and land rights of the Ogiek by the Republic of Kenya.

In November 2009, when the Kenyan Forest Service (KFS) delivered a potentially fatal blow against the Ogiek with the designation of an eviction order in October 2009 against the Ogiek and anyone else within the Mau Forest Complex–the ancestral homeland of the Ogiek–within 30 days, the African Court had issued an order to suspend the implementation of the eviction notice.

In March 2013, the African Court issued additional provisional measures requiring the Kenyan Government to stop any land transactions in the Mau Forest and refrain from taking any action that would harm the case, until a decision had been reached. This order, however, has never been respected by the Kenyan state.

After dismissing the numerous objections of the government of Kenya, the African Court delivered in Arusha a comprehensive judgement and a very clear ruling, read out over almost 2 hours by Hon. Justice Agustino Ramadani, the former President of the African Court.

The court found that the government of the Republic of Kenya illegally evicted members of the Ogiek community from the Mau Forest and has continuously violated the rights of the Ogiek under Articles 1, 2, 8, 14, 17 (2/3), 21 and 22 of the African Charter on Peoples and Human Rights.

The Republic of Kenya given 6 months to implement required remedies

Concerning the demand for reparations and compensation, the Ogiek have 90 days to file an application and the Kenya state has 90 days to respond to the demands. After this period, the African Court will rule on the reparations to be awarded to the Ogiek community and its victims of abusive state power.

The ruling has been widely welcomed as a fair and just decision by the Ogiek and ECOTERRA Intl., an organization that has stood by the Ogiek since 1986, as well as other important supporters including Friends of Peoples close to Nature (fPcN-interCultural), Minority Rights International and CEMIRIDE.

This article was originally published by ECOTERRA Intl. It was been edited for Intercontinental Cry under a Creative Commons Non-Commercial Share-Alike License.