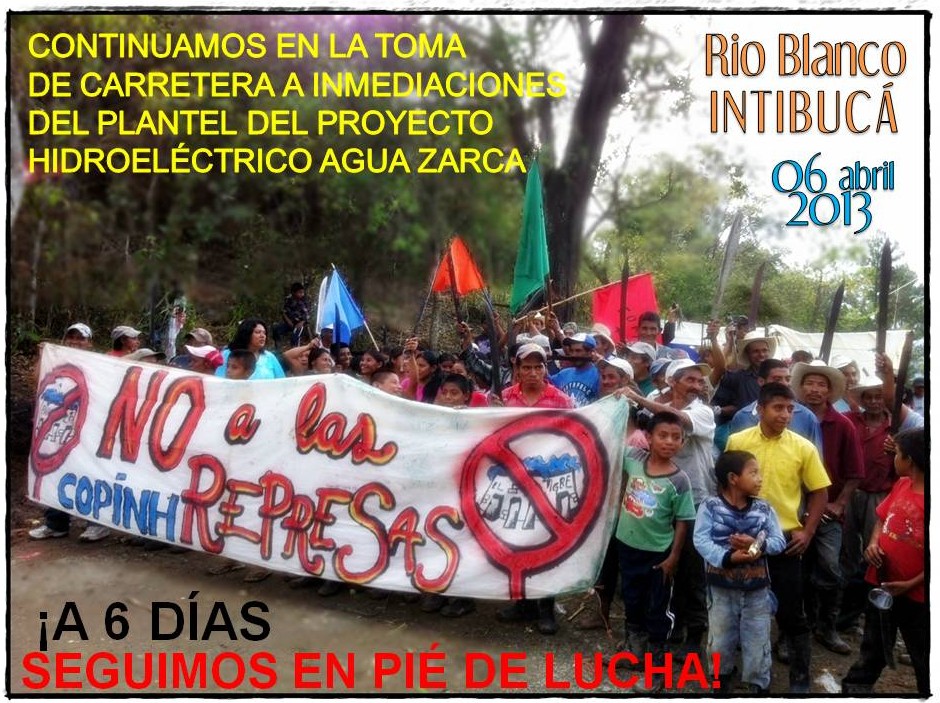 At 5am on the first of April, the indigenous communities* of Rio Blanco, Honduras, with coordination of COPINH (Consejo Cívico de Organizaciones Populares e Indígenas de Honduras), gathered on the main access road leading to the proposed “Agua Zarca” hydroelectric dam, blocking access to the construction that has already began. On the second of April they issued an ultimatum to the company, demanding the immediate removal of construction equipment and permanent removal of the project.

The communities of Rio Blanco, whom hold a community title to the territory, were not adequately consulted nor allowed to participate in the process leading to this project, as is international law. Only the mayor of the municipality and a few well compensated individuals ratified the project. The right of indigenous peoples to determine their own process of development is guarantied by ILO Convention 169.

The construction and completion of this dam will cause widespread environmental destruction, flooding inhabited and utilized areas, restricting the access of water to many thousands of people in Rio Blanco and down stream (access was recently blocked during holy week celebrations), cause the degradation of pristine natural areas, produce huge quantities of greenhouse gasses through the decomposition of submerged biomass, in addition to water and land contamination caused by the construction. Simply put, this dam is a death sentence to the indigenous communities that have lived here for generations.

This type of so called “green development” has been greatly accelerated after the 09′ coup which has since opened the flood gates to transnational and neo-liberal exploitation of natural resources.

There have been around 360 newly accepted development concessions in Honduras, 30% of which are on indigenous lands. Within this neo-liberal framework, dam projects serve a dual purpose. SIEPAC (Central American Electrical Interconnection System) part of the Mesoamerica Project (previously called Plan Pueblo-Panama) will connect the electrical grids of all Mesoamerica allowing cheap energy to be transported to the energy hungry USA. In addition, dams are necessary to redirect the enormous quantity of water needed for mining operations. For these reasons, resistance to the Agua Zarca hydroelectric dam (and dam projects in general) is extremely important because it will open the door to exponentially worse environmental degradation and destruction of indigenous cultures.

The danger to the communities of Rio Blanco participating in this action can not be understated. For example the land reclamation action 3 years ago in Bajo Aguan has seen the murder of over 100 participants and counting. There has been an influx of heavily armed men in the area, and violent threats against participants have been consistent.

International Solidarity plays an extremely important role in defending the human rights of those in defense of mother earth and indigenous culture. In addition to any form of solidarity action imaginable, the communities of Rio Blanco and COPINH are asking for people to send denouncements to various departments and heads of state. You can get details on that here: http://www.soaw.org/about-us/equipo-sur/263-stories-from-honduras/4091-copinhrioblanco.

Donation link (must put COPINH in field titled “on behalf of”): http://www.rightsaction.org/tax-deductible-donations