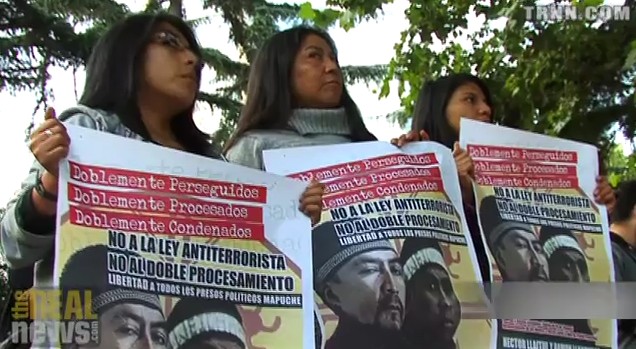 Most recent hunger strike by imprisoned activists over “politically motivated prosecutions” and state application of Antiterrorist Law comes to a close as conflict between Mapuche communities and the Chilean state intensifies. The Real News Network reports.

Two indigenous Mapuche prisoners in Chile have ended a 76-day hunger strike, which they initiated on November 14th of 2012. Hector Llaitul and Ramón Llanquileo say they are political prisoners targeted for their ties to an organization that is part of a broader Mapuche indigenous movement. But the Chilean state says they are terrorists, accused of participating in a violent attack against a public official in a region of southern Chile known as the Araucania. The prisoners say the liquid-diet only hunger strike, now their third since 2010, is in protest to their respective 15 and 8 year prison sentences, irregularities in their legal proceedings, and the state’s application of an antiterrorist law first introduced during the military dictatorship of Augusto Pinochet. The strikes were reportedly taking their toll on the prisoners’ health, and after a visit by a human rights delegation and the formation of a Mapuche human rights organization, they agreed to call off the latest strike, which was their second in less than a year that lasted longer than 75 days. The hunger strikes emerge against the backdrop of a recent escalation in a long-term conflict between the Mapuche people and the Chilean state over access to land. Guacolda Chicahual Quilaman is the spokeswoman for Llaitul and Llanquileo. She says the state’s application of special “laws of exception” like the Antiterrorist Law in the Araucania against dozens of Mapuche activists is meant to collectively punish and criminalize the movement seeking to reclaim traditional Mapuche lands.

Guacolda Chicahual Quilaman, Spokeswoman, Mapuche Political Prisoners CAM: “They are leaders of an organization within the Mapuche movement called the Coordinadora de Arauco Malleco. This organization has been heavily persecuted by the Chilean state and classified as an illicit association…what they are punishing here is not just the person, but rather the movement that is behind them that they lead, an organization that is part of the Mapuche movement which has been in the Mapuche communities coordinating the recuperation of territories, the recuperation and defense of territory from transnational businesses that have inserted themselves throughout Mapuche lands.”

Llaitul and Llanquileo were among 17 Mapuche community members accused of coordinating an attack against Prosecutor Mario Elgueta, who survived an alleged ambush by masked assailants wielding shotguns in October, 2008. Llaitul and Llanquileo are also accused of stealing wood to fund their political activities. Both maintain their innocence, and insist that the accusations are politically motivated. They say their trials were unfair and filled with irregularities. They were tried twice for the same crime, which is illegal under Chilean law. After being absolved in a military court, they were found guilty for the same charges in a civilian court. They say the state’s application of the Antiterrorist Law in their cases, which also enables the use of secret witnesses, was meant to arbitrarily punish them with lengthy sentences. Mapuche anthropologist Enrique Antileo says the cases of Llaitul and Llanquileo and dozens of other political prisoners cannot solely be understood in the context of the more recent mobilizations and state response to the Mapuche struggle for land and autonomy, positing that they are part of a long-term historical process.

Enrique Antileo, Anthropologist, University of Chile: “It is related to processes of struggle of the Mapuche society towards historical recognition, and these historical vindications are tied to the land, to the possibility of conquering and recuperating a space that was Mapuche and that was misappropriated, it has always been occupied by landowners, small scale capitalists, and later by large businesses, that had gone about accumulating the land as their own property, stripping the Mapuche society of their own territorial space and reducing it further and further, and so there are around 130, 140 years of long-term conflict over this issue of land, which today translates into the mobilizations among hundreds of communities that are struggling for their own space.”

There are a number of economic interests in the Aurucania region tied to the land conflict. The most significant economic activity is the forestry industry, with both national and transnational businesses as well as smaller-scale landowners controlling vast amounts of territory used in the production of wood. Industries and landowners operating in the Araucania say they have increasingly found themselves the targets of violent attacks against private property that in some cases have resulted in deaths. In the wake of the escalation, the Chilean state has essentially militarized southern Chile, which Mapuche activists say has severely impacted the civil liberties of Mapuche residents who live in the region, and subjected them to regular police violence. Chile’s current Minister of the Interior and Public Security is Andres Chadwick, one of a number of current members of rightwing President Sebastian Piñera’s cabinet who were early collaborators with military dictator Augusto Pinochet during his 17-year rule. During a recent press conference following an attack on private property in the Aracaunia that left 2 landowners dead, Minister Chadwick insisted that state security operations and the enactment of special powers in southern Chile are not intended to target the majority of Mapuche residents.

Andres Chadwick, Minister of the Interior and Public Security, Chile: “We are coordinating all of the necessary tasks, especially in the area of policing, in the area of the provisioning of the Carabinero police and investigations as well as in the area of police intelligence, in the same vein we are collaborating actively with the investigations that the state prosecutors are carrying forth, with the intention of not allowing these acts of violence to go unpunished in our country, because of this we are taking special actions…we are fully conscious, so that people don’t misinterpret this as an act of bad faith, that here it is a very small and limited group of very violent people who have nothing to do with the Mapuche people, the Mapuche people in their overwhelming majority, almost in their totality, are a people who want peace and who want to advance and develop, here there is a very small group, and they are causing great harm to the Mapuche cause.

For Mapuche residents living in militarized southern Chile, Carabinero police’s actions speak louder than the minister’s words. Many Mapuche activists involved with movements demanding greater autonomy and the recuperation of ancestral lands say they are unfairly classified as terrorists by the state due to isolated incidences of violence that in a number of cases have not even been proven to have been carried out by Mapuche movements. The Real News spoke with Chilean historian Fernando Pairican who has studied Mapuche movements like Llaitul and Llanquileo’s organization the CAM. He said that while there isn’t hard data available on levels of popular support for more militant movements like the CAM among the general Mapuche population, support for their demands of territorial control and autonomy runs high in many Mapuche communities. Renowned Chilean sociologist Alberto Mayol says the government response to the conflict reflects a broader unwillingness of the state to interact with social movements, which is even more pronounced in the case of the Mapuche movement and the harsh terrorism related sentences handed down to activists like those who have initiated hunger strikes in recent years.

Alberto Mayol, Sociologist, University of Chile: “There has been a repertory incapacity of the Chilean state to relate with those movements that protest, and this has been very evident in the case of the Mapuche people, which has been systematically transformed into an issue of terrorism, because of this the sentences are augmented, they apply the Law of State Security and anything else that will result in more severe sentences, and the use of all forms of violence, when there is a confrontation with the Mapuche where some stones are being thrown, it’s considered an ambush, or a terrorist action, the truth is that there is a huge disproportion with respects to the Mapuche mobilization.”

In the wake of escalating violence in the Araucania since the start of 2013, Mapuche groups attending the first ever “Cumbre Mapuche,” or Mapuche Summit, denounced the military occupation of their ancestral lands and asserted calls for self-governance and self-determination. President Sebastian Piñera roundly rejected the calls for autonomy, stating “We are proud to be a multicultural country, but we are not willing to put at risk the unity of Chile.” Hector Llaitul and Ramón Llanquileo say they will continue fighting for their demands through the newly formed Mapuche Human Rights organization.