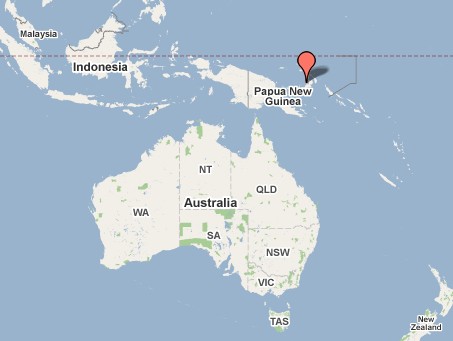 During the last week of June, indigenous representatives from the Bismark Sea region of Papua New Guinea held a three day gathering to discuss deep sea mining and what dangers they may face as a result of this experimental mining process.

The Canadian mining company Nautilus Minerals recently gained a contract from the government to pursue such a mine, off the East New Britain Coast.

After three days of talks, the representatives emerged as the Bismarck Solomon Seas Indigenous Peoples Council, with a plan to oppose Nautilus’ and any other deep sea mining project in their territories until their concerns are heard and properly addressed.

The newly-formed council also issued a statement, which was subsequently “endorsed by the Ramu River Authority, Simil Hondulwa Evangelical Alliance of PNG, New Ireland Students Association of University of Technology, Sea Turtle Restoration Project, Alemewo Foundation, the Catholic Church, Madang Rehabilitation and presented from Vanuatu, Porgera, plus observers from surrounding community based organisations, school teachers and students,” according to a July 1 media release by the newly formed council.

To support this opposition, send an email to David Heydon, the CEO of Nautilus Minerals, Inc., “asking him to stop all operations until the demands of the villagers are met for a proper consultation process that ensures the protection of their environment, their safety, their food supply, and their way of life.”

We, indigenous people of the Bismarck-Solomon Sea declare our rights to Free Prior Informed Consent over anything potentially impacting our land or sea resources, and that this right arises from our customary law and is outlined in the UN Declaration on Indigenous People.

The Goals and Directives of our National Constitution commit the Nation to ensuring the equal opportunity of all citizens to participate in and benefit from the development of our country;

And the conservation of our national resources and environment to be used for the collective of us all and replenished for the benefit of future generations.

We declare and reaffirm our customary rights and connections to the Bismarck and Solomon Seas including economic, cultural, social, political and religious rights. Our livelihood and culture is based around these oceans, and it is an inseparable part of our culture, identity and way of life. Our lives are interconnected with the cycles of the sea, it is our calendar and we are dependent on it for our survival.

We met in Karkum village to discuss our concerns over seabed mining in our seas.

The protection of the ocean and coastal areas of the Bismarck and Solomon Seas is of the utmost importance to all of us and our future generations, and we will never compromise in protection of our seas.

The seabed mining currently proposed and already under exploration lease for our seas-the first of its kind in history-is of serious concern to us.

There has been a lack of any meaningful consultation of the indigenous people of the Bismarck Solomon;s sea regarding the effects of this mining activity.

There are no current laws to manage this activity and the current draft proposals for a PNG sea bed mining policy and an oceans mining act have not been made available to us.

There has been a lack of adequate research to understand the sea bed environment, the currents, the ecology and its true value. The impacts and changes to the environment from this activity cannot be accurately predicted.

Using our own traditional knowledge of the complexity, richness, and sensitivity of this marine environment, and calling on the international precautionary principle, we believe there could be serious long term and potentially irreversible impacts by this activity.

Concerned by the fact that exploration is occurring without proper regulation, monitoring or consultation across the entire region.

Concerned that there has been a failure to set aside areas to protect them from the impacts of these activities, and that sanctuaries for threatened species, and habitat and spawning and migration areas for our rich fishery resources have not been created.

We are aware that the socio-economic and environmental costs of mining in PNG are often greater than the benefits. While company conducting the seabed mining operation-Nautilus-has no track record from which we can judge its environmental and social responsibility, we are very concerned by the poor performance of other mining companies in other areas in PNG.

We suggest to the government and companies involved that they should concentrate on properly managing existing mines before they propose or permit new areas to be developed. Instead we ask our government and others to focus on constructive alternatives of low impact sustainable industries.

We don’t want our health, livelihood and resources to be subjected to a large scale experiment.

The burden of proof to show that these activities are safe must rest upon the companies and government.

Given all these things above, we do not consent to the sea bed mining activities in our waters and seas.

We therefore call on the government and companies involved to cease any and all operations until all our concerns above are addressed and resolved to our full satisfaction.