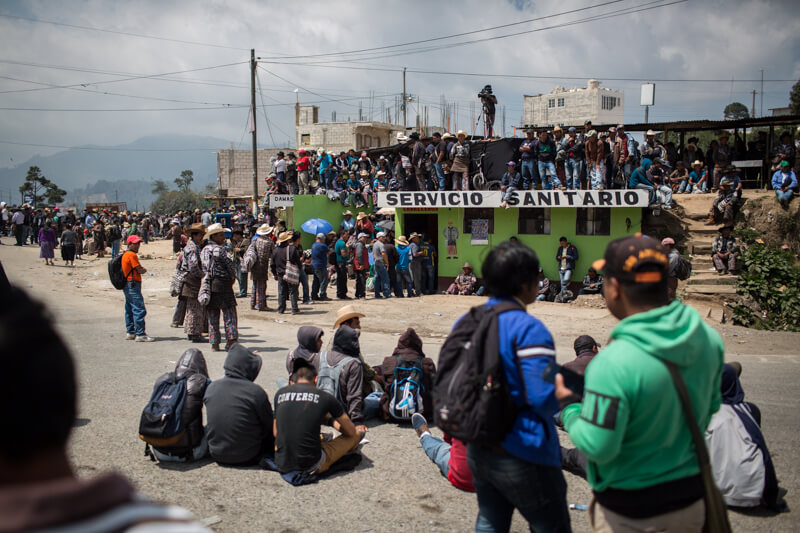 Indigenous communities across Guatemala have brought the country to a standstill for the second day in a row. Blockading major crossroads and highways, the nationwide peaceful demonstrations are protesting against the Guatemalan congress’s rejection of a constitutional reform that would legally recognize indigenous justice as part of the country’s judicial system. 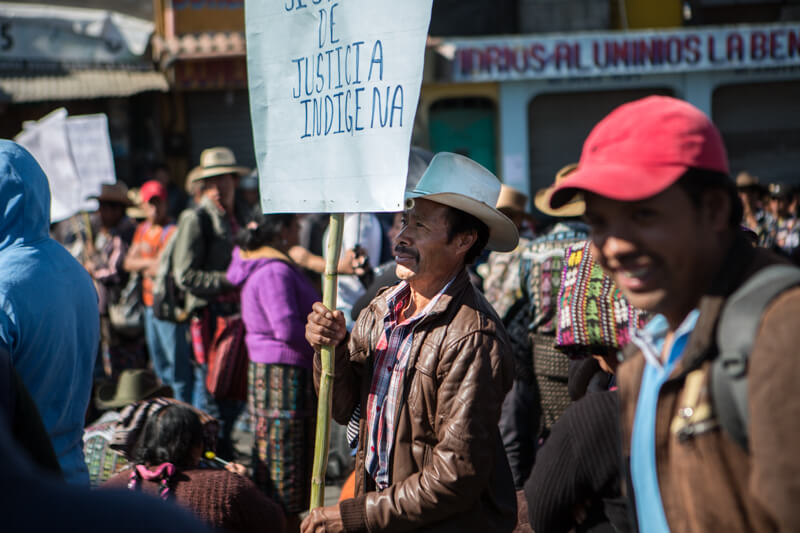 An estimated 60 percent, or more than 6 million inhabitants, make up Guatemala’s population (IWGIA). Yet indigenous systems of justice, wherein local authorities rule on community issues, have been looked down upon by a country that continues to hugely discriminate against its majority indigenous population. The reforms face opposition from conservatives and major businesses that control most of Guatemala’s land and economy. Although many of these business interests campaigned against the reforms under the guise of fearing “legal confusion,” indigenous activists and leaders at the protests describe the opposition as deriving from a fear of losing any of their elite power to those who have been oppressed and exploited for centuries–Indigenous Peoples. 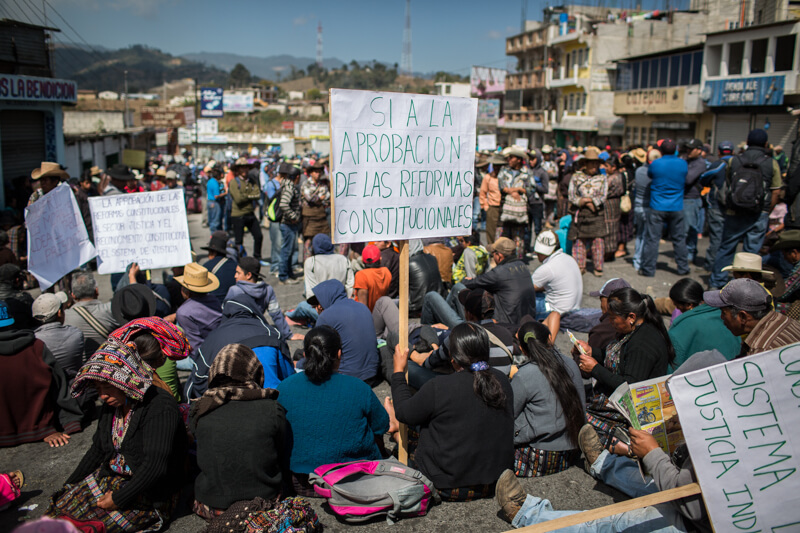 At Los Encuentros, one of the most important crossroads between major cities located along the Pan-American Highway, thousands of indigenous people of the Sololá region gathered to participate in the blockades. 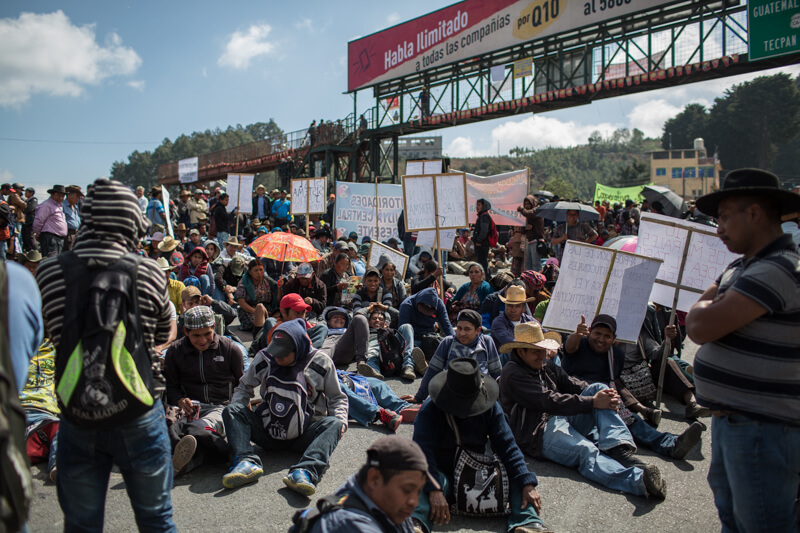 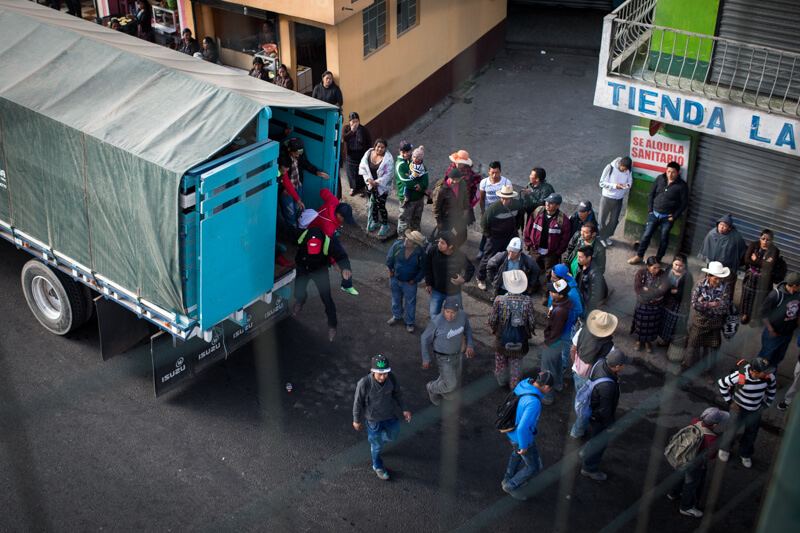 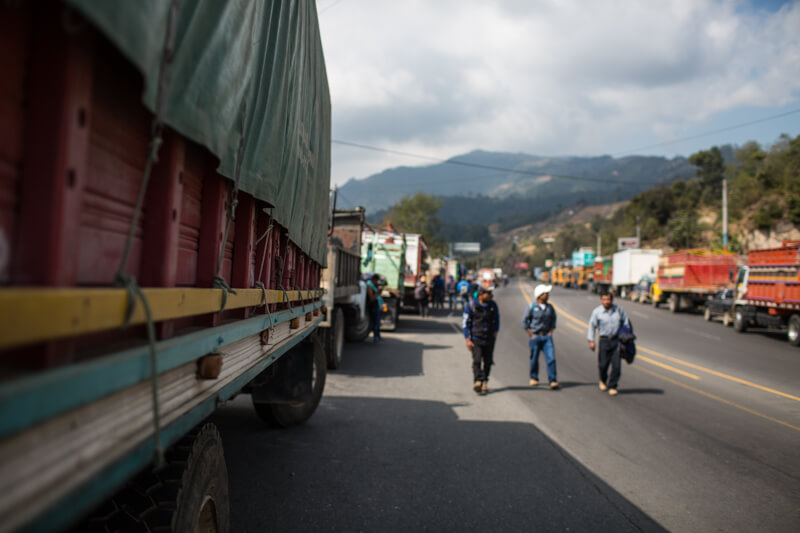 Cargo trucks and chicken buses line the Pan-American Highway as drivers participate in the protests, also providing free transport between Sololá and blockade sites at the beginning and end of each day of demonstrations. Photo: Anna Watts

Announcements asked demonstrators to remain in their chosen spot without moving from the site for meals. 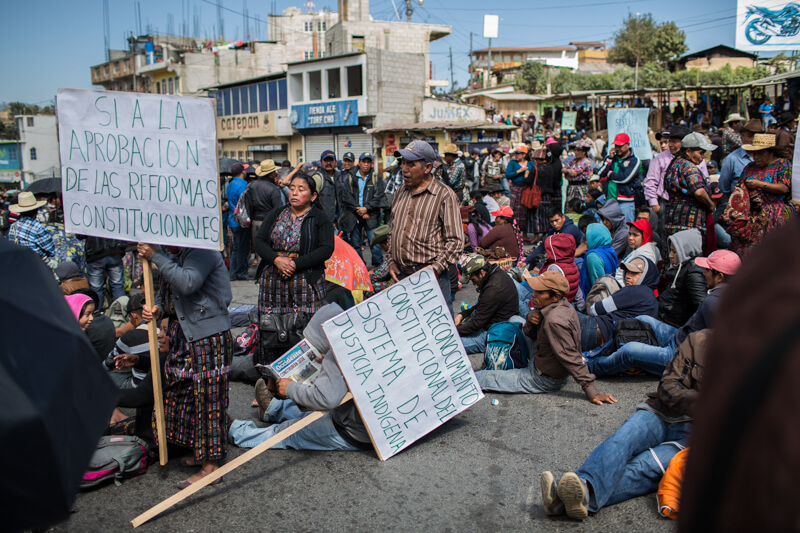 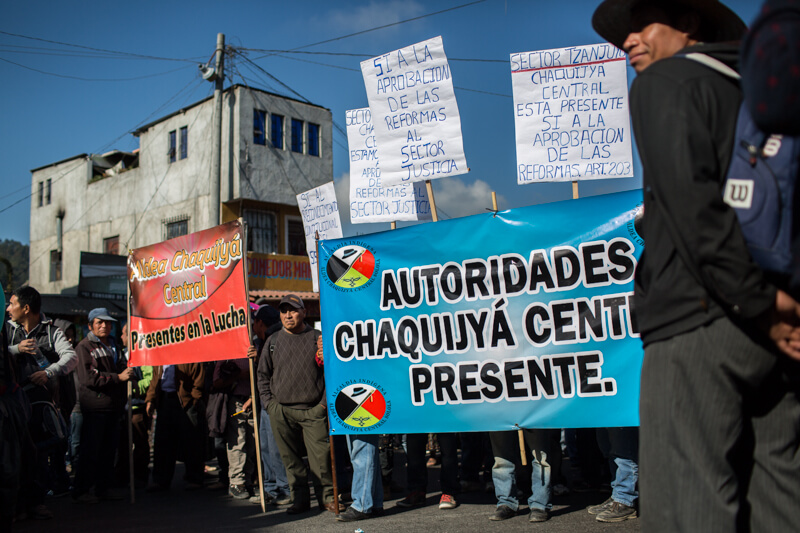 By 8:30 am, every tienda, comedor, and tortilla stand had been closed down and locked up, a rare sight for the ever-bustling highway hub. 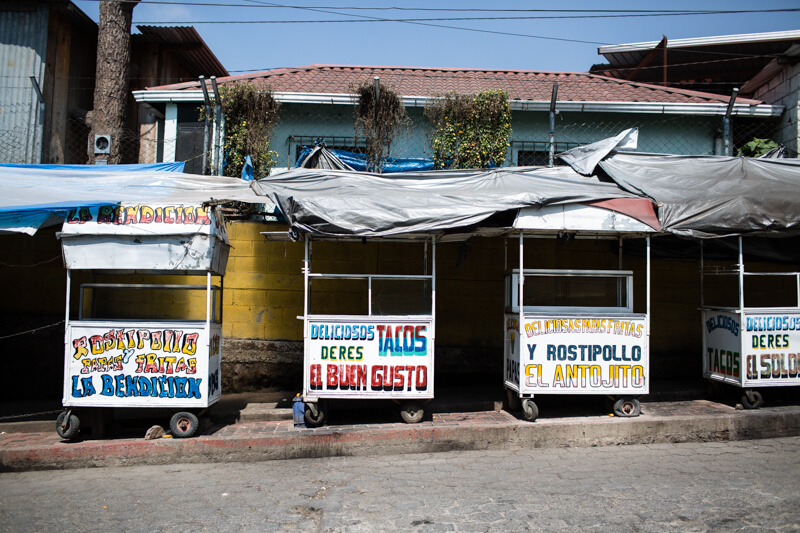 The deserted city of Sololá, all shops and market stalls empty and shut due to the nationwide protests. Photo: Anna Watts

The majority indigenous city of Sololá was deserted; not a car in sight nor shop windows open. 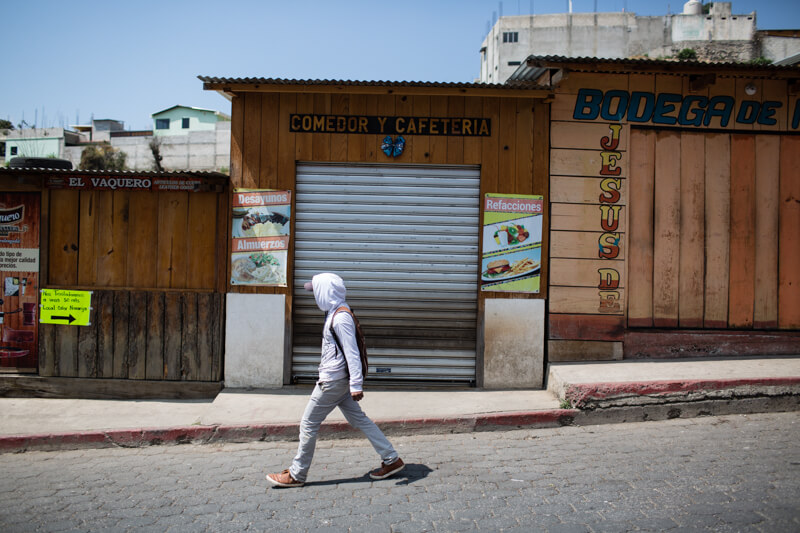 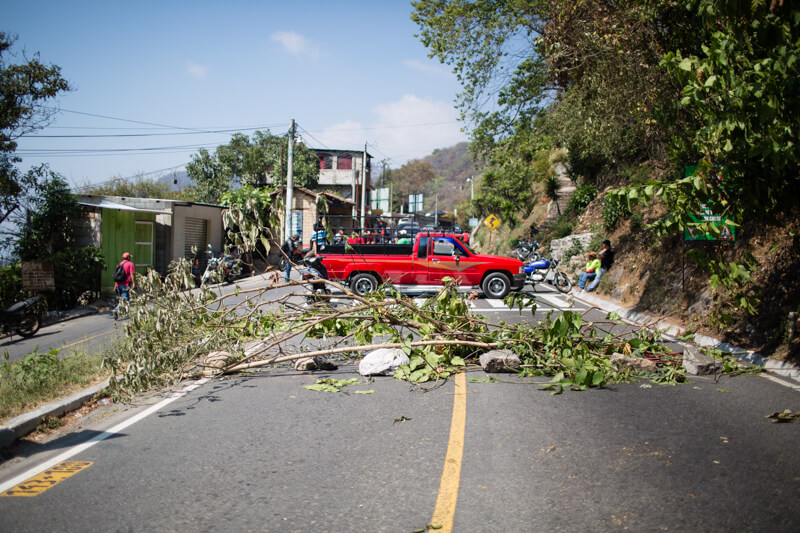 A makeshift blockade outside of San Jorge La Laguna, preventing travel to the touristed town of Panajachel and other lakeside indigenous communities around Lake Atitlán. Photo: Anna Watts

Protesters organized and coordinated solely by means of meetings and phone calls between indigenous community leaders. Use of internet or social media to communicate and gain protest support was entirely avoided out of fear of vulnerability and tracking by police and those opposing the reforms. 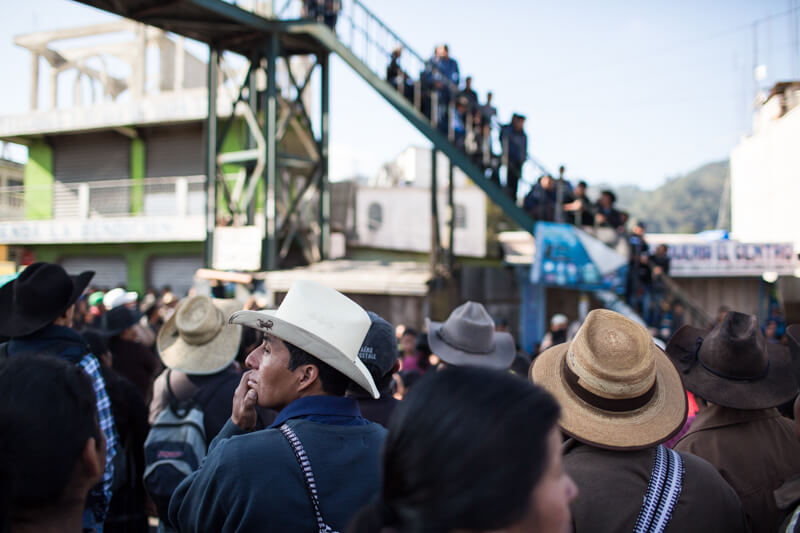 This distrust was reflected in weak media coverage of the protests; in spite of the thousand plus standing in solidarity at Los Encuentros, only one reporter from a local agency showed up with a small video camera. 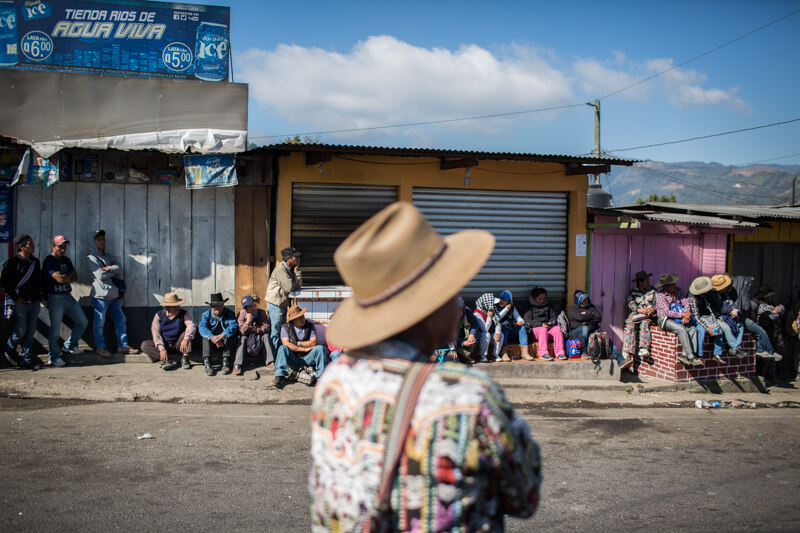 Protesters line the road leading to and out of the Los Encuentros crossroad, along the Pan-American highway, guarding against any incoming traffic and transport. Photo: Anna Watts