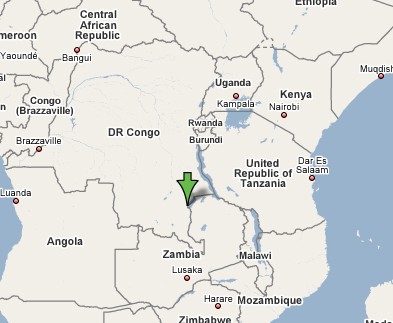 Amnesty International warns that two human rights defenders, Georges Kapiamba and Prince Kumwamba, both from from Katanga, a southern province in the Democratic Republic of the Congo (DRC), have received several threats related to their human rights work since the evening of April 3.

Along with other activists, Georges Kapiamba and Prince Kumwamba have been planning to visit the town of Kilwa in Katanga province, the scene of a massacre by government troops in October 2004. Amnesty explains that “the visit [is] on behalf of an Australian legal firm pursuing possible compensation claims in the Australian courts against an Australian/Canadian mining company, Anvil Mining.”

For background and more information, visit www.raid-uk.org, and www.abc.net.au/4corners/ to watch the Kilwa Incident. Also see www.friendsofthecongo.org for general human rights news related to the Congo.

Amnesty asks you to send an appeal to authorities in the DRC, urging them to:

The threats to Georges Kapiamba, a lawyer who works with the organization Association Africaine de Défense des Droits de l’Homme – Katanga (ASADHO/Katanga), African Association for the Defense of Human Rights, and Prince Kumwamba, Executive Director of the organization Action Contre l’Impunité pour les Droits Humains (ACIDH), Action Against Impunity for Human Rights, both based in Lubumbashi, the capital of Katanga province, have been made anonymously by telephone. Amnesty International believes that senior political figures in Katanga province may be behind the calls. During one of the telephone threats, the caller warned Georges Kapiamba, “Since you don’t want to stay quiet about the Kilwa affair and since you continue to provoke the government, we are going to destroy you so that you will no longer be able to do any harm. We’ll get you by all means possible”. (« Comme tu ne veux pas te taire sur le dossier Kilwa et que tu continues à déranger le gouvernement, tu vas être détruit afin de te mettre hors d’état de nuire. Nous allons t’atteindre par tous les moyens. ») Prince Kumwamba has also received phone calls warning him to halt his activities in relation to the same affair.

The threats appear to relate to a planned visit by Georges Kapiamba, Prince Kumwamba and other activists to the town of Kilwa in Katanga province, the scene of a massacre by government troops in October 2004. The team intended to interview a number of those injured in the massacre, and families of the victims. The visit was on behalf of an Australian legal firm pursuing possible compensation claims in the Australian courts against an Australian/Canadian mining company, Anvil Mining.

As the team prepared to fly from Lubumbashi to Kilwa, they were informed by air traffic control that permission for the flight had been denied by the ANR (Agence Nationale de Renseignements) intelligence agency and the Minister of Interior of Katanga province. The team was later informed that the Governor of Katanga had also refused them permission to travel to Kilwa.

ASADHO Katanga and ACIDH, together with two international NGOs, Global Witness and Rights and Accountability in Development (RAID), issued a joint press release on 3 April protesting against this official obstruction to the activists’

These latest threats are part of a pattern of intimidation and harassment of human rights workers in relation to their work on the Kilwa massacre, although the death threat against Georges Kapiamba appears to be the most serious to
date.

At least 73 civilians, including many women and children, were killed unlawfully in and around Kilwa in October 2004 by soldiers of the 62nd Brigade of the Forces Armées de la République Démocratique du Congo (FARDC), Congolese Armed Forces. Other victims were arbitrarily arrested and subjected to torture and ill-treatment. Anvil Mining, which operates a copper and silver mine near Kilwa, provided transportation in the form of company planes and road vehicles for the army operation. Anvil Mining maintains that its equipment was requisitioned “under the force of law” by the security forces and denies any direct involvement in the killings. In June 2007, a military court in Lubumbashi acquitted 12 defendants, including military officers and three expatriate employees of Anvil Mining, of charges of war crimes and complicity in war crimes in connection with the massacre. Four of the defendants, all soldiers, were convicted of unrelated crimes. There was apparent high-level political interference in the trial, as well as intimidation of witnesses.

The acquittals were widely condemned as a setback in the struggle against impunity in the DRC. An appeal against the court’s judgment was denied in December 2007.