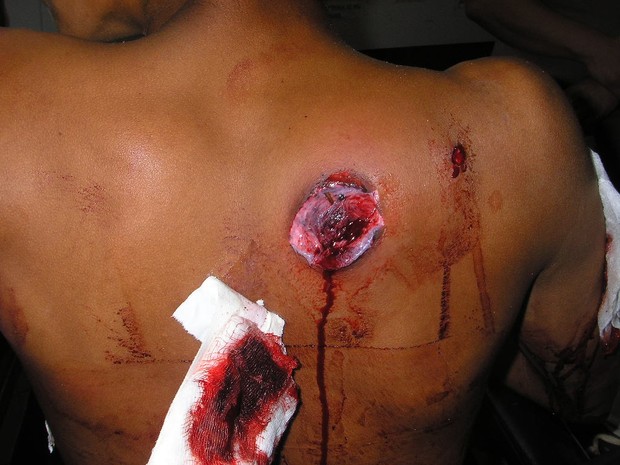 On Monday July 15th, while the Lenca community of Rio Blanco, in Honduras, marked 106 days of resistance to the building of Agua Zarca hydroelectric dam, the Army indiscriminately shot at the demonstrators killing one of the leaders of the resistance, Tomas Garcia, and seriously injuring his son (photo).

Tomas was a Lenca indigenous leader who was part of his community’s Indigenous and Auxiliary Council and of the National Council of the Civic Council of Popular and Indigenous Organizations of Honduras (COPINH).

The Honduran activist was shot dead while he was walking with other community members to the project’s facilities owned by Desa and Sinohydro companies, while his son, who was seriously injured by a high-calibre bullet, is in hospital and his life is in danger, Berta Caceres, leader of COPINH, told Real World Radio.

Berta described the act as “a desperate and criminal reaction” by the companies that want to build a dam on River Gualcaeque, seriously affecting the communities living there. The Honduran army supports the companies, said Berta, and they even pay for the transportation and maintenance of troops deployed by the Honduran government in Tegucigalpa in Rio Blanco.

On Monday night, COPINH reported of more military troops being deployed in Zacapa, Santa Barbara, and there were fears of new shootings against civilians during the wake of the murdered indigenous leader.

“The community is outraged. We are in great sorrow, also because we believe we have to continue our struggle”, said Berta during a phone interview. “As the elections approach (in November) they want to teach COPINH a lesson”, she explained and said the community decided to continue occupying the access to the dam.

A few hours after the incidents, COPINH had reported that since Friday 12, top executives of the company Desarrollo Energético Sociedad Anónima (DESA)- which is in charge of the project together with the original group Sinohydro – travelled to meet with local hitmen, who are responsible for direct threats against several members of the indigenous council, including Tomas Garcia.

Before they started shooting at civilians, the military made no attempt to talk with the activists, said Berta.

The leader of COPINH was illegally arrested in May and submitted to a trial for purportedly having an illegal weapon, something that the court could not prove and the case was finally dismissed.

The leader highlighted that in the new cases of repression against residents of the community of Rio Blanco, we urgently need international solidarity to report the civic and military authorities and both companies for murder.

“We are aware that we are confronted with an impunity strategy in a context that seems to be worsening”, said Berta. She said the communities’ determination to defend their territory is strengthened in these situations of state and private violence.

In fact, river Gualcarque is considered an essential part of the Lenca spirituality and the communities are confronting the business projects as a tribute to their culture’s symbolic figure: Lempira.

“We continue fighting, we are not afraid, we will not be prey to fear and we will continue this peaceful but strong battle for life”, she concluded.

This work by Real World Radio is licensed under a Creative Commons License.