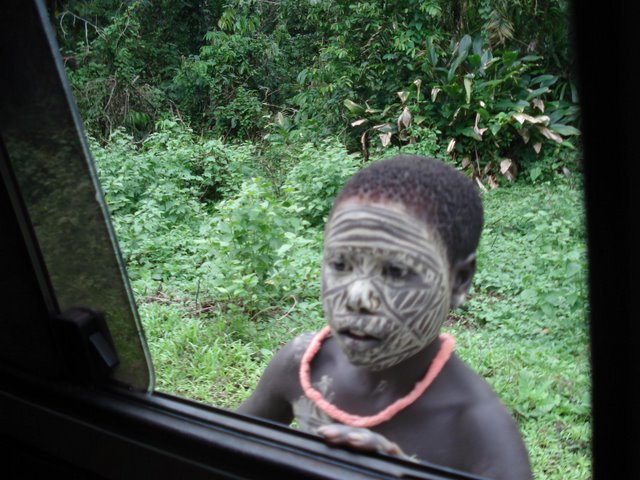 Highway means death to the Jarawa

The Andaman Trunk Road, a 200 mile-stretch of concrete that breaks through one of India’s most pristine landscapes, is being used now more than ever. According to recent figures, there has been a threefold increase in traffic since 2001 – “from 17,315 to 37,505 in 2006. A total of 27,674 vehicles travelled the road in the first seven months of 2007 alone.”

I suppose this increase should be expected – the road is obviously quite useful – but it’s a bit strange seeing as how the Indian Supreme Court ruled six years ago that the road must be closed for threatening the Jarawa tribe. Right now there shouldn’t be any traffic on Andaman Trunk Road.

“It’s an indication that even a court order is not enough if there is not the will to enforce the decision. Historically, the road has been the key factor bringing outside influences into the tribal areas … It is the first point of entry,” states Pankaj Sekhsaria, author of Troubled Island, a book about the plight of the tribes.

Local authorities simply refuse to abide by the ruling. “We have appealed against the court order,” said Shyami Sodhi, the island administration’s secretary of tribal welfare. “The road is a lifeline that links the South Andaman with the Middle and North. If you close it, how will the settlers get here?”

According to the article on the Independent, they’re instead trying to ‘balance the desire for development and preservation. They say they have recently imposed a further buffer zone around the reserve, in which no economic activity is permitted.’

As wise as this may be, the problem is not with balance, but existence. This road has brought with it disease and pollution, aswell as poachers, loggers, and tourists. The impact this has had on the Jarawa is well understood. As stated in India’s Frontline magazine:

In October 1997 – a drastic change in the lifestyle and attitudes of the forest-dwelling Jarawas who were previously extremely hostile to outsiders. For reasons that are not yet clear, the Jarawas voluntarily broke their circle of isolation and hostility and came out from their forest home to have peaceful interactions with the settler communities that live on the forest’s edge (Frontline, July 17, 1998).

Almost overnight, the until then feared and mysterious Jarawa became a subject of intense curiosity. People travelled to the margins of the forest to catch a glimpse of the Jarawa, and a small industry was created out of this. The impression gained ground that there was not enough food in the forests to support the community. Consignments of bananas, coconuts and papayas were sent in regularly and even air-dropped into the forests.

The end of the hostility of the Jarawa also saw the increased exploitation of resources from the Jarawa forest reserve. Sand mining from the beaches on the western coast of the islands and poaching and removal of non timber forest produce (NTFP) from the forest habitats increased drastically.

The end result has been seen twice, when the Jarawa suffered outbreaks of measles in 1999 and 2006 – something all too familiar on the Adaman Islands. The Great Andamanese once stood at 5,000 in number. When the British arrived, however, they contracted measles. Numbering somewhere around 50, the Great Andamanese are now completely dependent on the government for food, shelter and clothing.

Fortunately, the outbreaks among the Jarawa were not so great, but when coupled with everything else they are facing, well is there really any wonder why the Indian Supreme Court ruling should be accepted? This entry point is a gateway to the death of the Jarawa.

Learn more about the Jarawa at Survival International