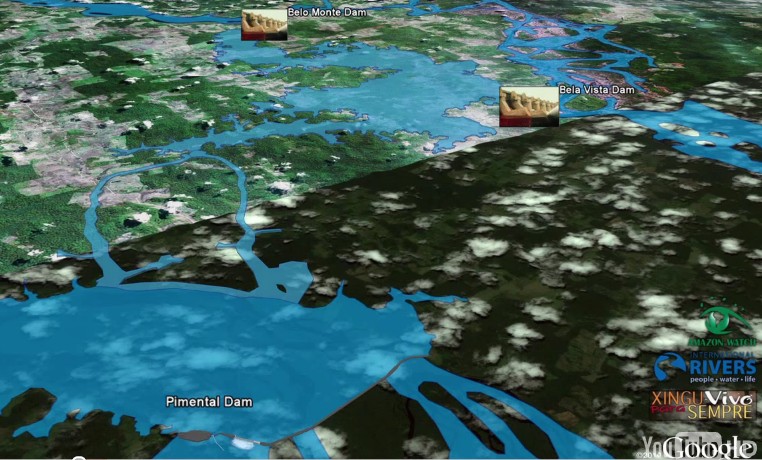 American actress Sigourney Weaver narrates a 10-minute graphical tour about the harmful impacts of, and alternatives to the massive Belo Monte Dam Complex on the Amazon’s Xingu River.

The controversial project, said to be “one of the most inefficient dams” ever proposed, would have numerous social and environmental impacts on the Amazon region.

First and foremost, the dam complex would divert the flow of the Xingu River, depriving a vast region of important seasonal floodwaters. Reservoirs for the dam, on the other hand, would flood more than 500 square kilometres of pristine Rainforest.

The region’s biodiversity would be severely impacted by the dam, whether it’s endemic and migratory fish species like the plant-eating piranha; endangered species like the white-cheeked spider monkey; or threatened turtle species who would lose their breeding grounds.

The dam would also displace between 20,000 and 40,000 people (officially 19,000 people) including Juruna, Xikrín, Arara, Xipaia, Kuruaya and Kayapó Indigenous communities.

Because of the risk of displacement to Indigenous Peoples–and the fact that the Brazilian government hasn’t consulted them–the Inter-American Commission on Human Rights (IACHR), this month requested the Immediate Suspension of the Belo Monte Dam until a “culturally appropriate” consultation process has taken place.

The IACHR’s decision was in direct response to a November 2010 complaint presented by the Xingu Alive Forever Movement (MXVPS), the Coordination of Indigenous Organizations in the Brazilian Amazon (COIAB) and others on behalf of local, traditional communities in the Xingu river basin.

“The IACHR also request[ed] Brazil to adopt “vigorous and comprehensive measures” to protect the lives and personal integrity of isolated indigenous peoples in the Xingu river basin, as well as effective measures to prevent the spread of diseases and epidemics among traditional communities threatened by the project,” notes a joint statement by MXVPS, COIAB, SDDH, AIDA, Amazon Watch and International Rivers.

Sadly, Brazil’s Foreign Ministry responded to the IACHR by claiming that the commission’s request was “hasty and unjustified.” The government insists that they’re already taking into account all the social and environmental impacts surrounding the project.

In late February, a federal judge in Brazil suspended construction of the Belo Monte Dam, citing 29 unmet environmental and social conditions. To date, the government has not addressed any of those conditions.