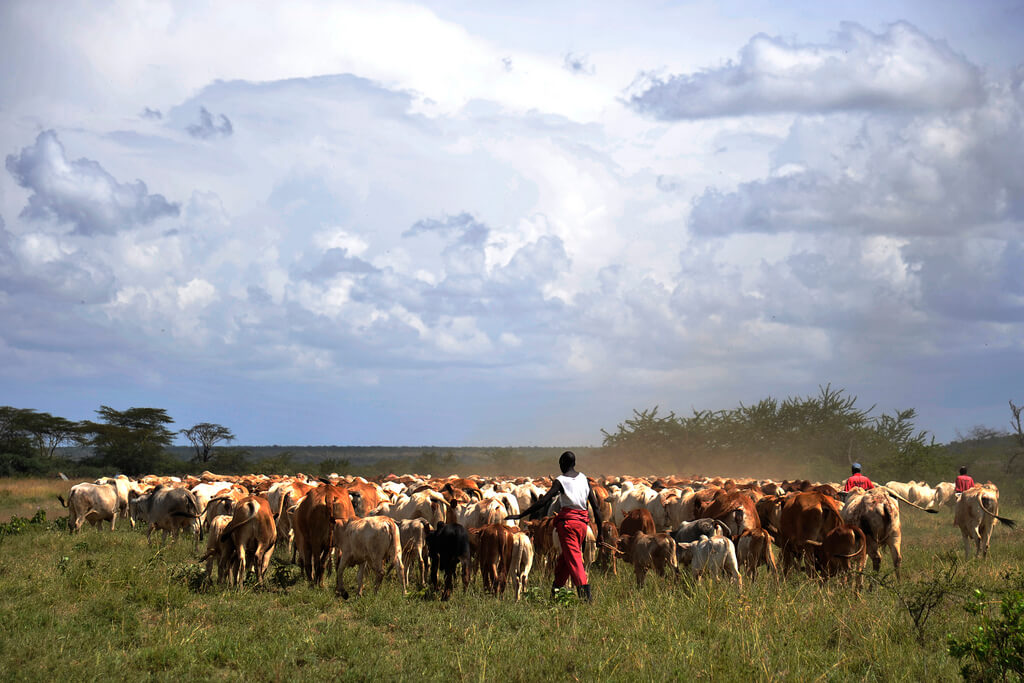 In a Guardian Story About an Environmental Conflict in Kenya, the White Saviour Rides Again

Colonial tropes abound in a report on the clash between herders and settlers in Laikipia
Herders with their cows in Laikipia. Photo by USAID made available under a Creative Commons license.
Support our journalism. Become a Patron!

The Guardian recently published an article by Tristan McConnell, their correspondent in Nairobi, Kenya, titled “Who shot Kuki Gallman? The story of a Kenyan conservationist heroine.” McConnell attempts to tell the story of a conflict in Laikipia, a county in northern Kenya, through the eyes of Gallmann, who is best known for her autobiography I Dreamed Of Africa, which was turned into a 2000 feature film starring Kim Basinger.

Laikipia has been in the headlines on account of the migration, triggered by harsh weather conditions, of local herders and tens of thousands of their cows, goats and sheep in search of water and pasture. The migrating herders and their livestock have breached the fences and boundaries of private nature conservancies, which account for nearly half of Laikipia’s land area. Politicians, taking advantage of historical grievances, have goaded the pastoralists on. Their call for the herders to forcibly occupy the holdings of all large landowners in the area, both black and white, has rattled Laikipia.

McConnell’s framing of Gallmann as a regal, gallant hero fighting to “save the environment” against marauding hordes of “impoverished, local men” is so riddled with colonial tropes that it is astonishing The Guardian published it with that language intact.

Let’s begin with the article’s descriptions of the Laikipia landscape—”undulating savannah, forests, winding rivers, waterfalls, rocky hills and steep-shouldered escarpments. The land is home to elephants and rhinos, giraffes, zebras and antelopes, wild dogs, bat-eared foxes and lions.” It was here, the article continues, that “white, often British, settlers came to farm wheat and raise cattle during the first half of the 20th century, before independence. ” The ahistoricism of the description is jarring. It suggests that Laikipia was a terra nullius, an empty, unclaimed vastness waiting for someone to put it to good use. This, of course, is not the case.

Laikipia was the traditional homeland of the Maasai and Samburu people. It was violence—guns, coercion and deceit—that pushed these people out and created the “emptiness” so beloved of white settlers. Laikipia is not merely the habitat of bat-eared foxes and wild dogs—it is home to real, breathing humans. And the settlers were not a bunch of benign farmers looking to raise livestock. They were backed by the firepower and coercive machinery of the colonial state.

According to the story, Kuki Gallmann arrived in Kenya from Italy in 1972, a latecomer to the ranching enterprise, with a pile of luggage shipped in from Venice and a romantic nostalgia for a place she had never been. “I totally and utterly fell in love with Ol Ari Nyiro,” she wrote, “and I felt—and it’s irrational and difficult to explain—that I had come home and there was a reason for me to be there.”

Isn’t it interesting that there are wonderful empty places in this beautiful Kenya waiting for someone to fall in love with them? That you can land in a place you have never been, where “falling in love” gets you 88,000 acres of prime ranch land? The casual erasure of the colonial violence that made Gallman’s acquisition possible, and the human and social cost of it, is striking.

“Since many, many years my aim is to try to prove that people and environment can survive together, you have to have a balance,” says Gallman the conservationist. What a revelation! If it weren’t for “the conservationists”, the article suggests, we Kenyans would never have grasped that fact. The White Saviour to the rescue, again.

This is insulting. Africans have been co-existing with wildlife for millennia. That’s why the continent now has the wildlife to conserve in the first place! For the African, preserving nature was not something done to capture the attention of others, as the ecologist-journalist duo Mordecai Ogada and John Mbaria have noted. It was enshrined in ordinary, mundane, day-to-day life, in the form of taboos against killing certain animals, and reinforced in rituals, stories and songs. It was not the post-industrial, exaggerated fascination with nature developed by Europeans in the aftermath of their widespread and systematic looting and plundering of the natural world in the name of “industrialisation”.

Due to the current violence, McConnell’s article reports, some ranches have closed and some owners are considering selling. But others, Gallmann among them, are hunkering down. “They are going to get tired of it,” she says. “I know I will outlast them. There is no doubt in my mind.” “They”, meaning the impoverished local Pokot militiias encroaching on “the environment”. They will get tired. Kuki Gallmann will outlast them.

In a way, Gallmann is right. They will get tired. They are poor, impoverished and local, after all. Their children will get hungry and thirsty. They will turn against each other. They will run out of ammunition. There’ll be political changes. And they will scatter.

But there is such cruelty in someone casually waiting for “them” to scatter, to hunger, to thirst, to turn against each other and just go away and disappear. Or at least to go back to being poor, local and impoverished, but quietly. I am struck by grief when I read this, the grief of knowing that someone is waiting for our death, our silence, our hunger and thirst and confusion.

This is not to say that the conflict in Laikipia is not complex, or that there are easy answers. Climate change is leading to more frequent and more punishing droughts. Add the mix of demographic pressures and politics is an explosive one. But we have to tell the story right. Framing the conflict as between a noble conservation queen and a savage mob of impoverished locals is not only irresponsible and cruel. It is also simply not the truth.

This article was originally published by Global Voices. It has been re-published at IC under a Creative Commons License.