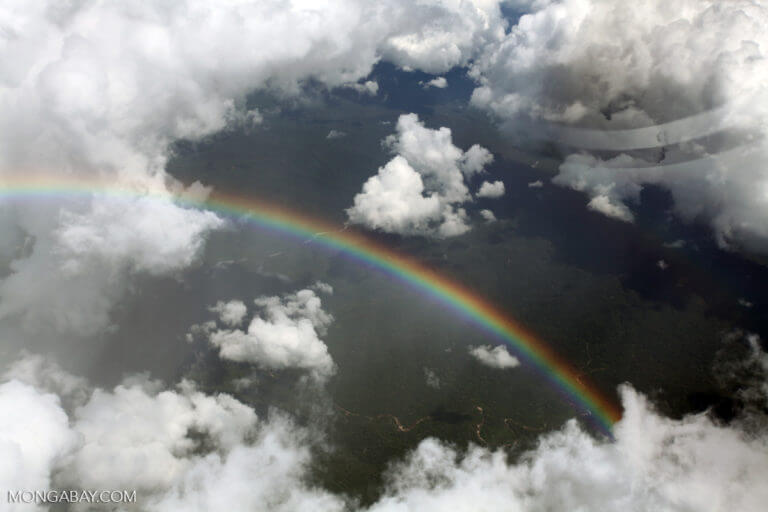 New research provides yet more evidence that granting indigenous and other local communities formal title to their traditional lands can be a boon to efforts to conserve forests
Rainbow over the Peruvian Amazon. Photo by Rhett Butler.
Support our journalism. Become a Patron!

New research provides yet more evidence that granting indigenous and other local communities formal title to their traditional lands can be a boon to efforts to conserve forests.

Deforestation is responsible for as much as 10 percent of total global carbon emissions, which means that finding effective means of keeping forests standing is crucial to global efforts to halt climate change.

Previous studies have found that securing indigenous land rights is a successful path to keeping forests and the carbon sinks they represent intact. A 2016 analysis by the World Resources Institute (WRI) focused on Bolivia, Brazil, and Colombia, for instance, determined that tenure-secure indigenous forestlands could help avoid the release of carbon emissions equivalent to taking nine to 12 million passenger vehicles off the road over the next 20 years.

According to another report released last year as part of a collaborative research project by the Woods Hole Research Center, the Rights and Resources Initiative, and WRI, there is a lot of carbon stored on indigenous lands, making increased land titling a significant opportunity for climate mitigation. But the research found that, while indigenous peoples and other local forest communities manage at least 24 percent of the carbon stored above-ground in Earth’s tropical forests, or some 54,546 million metric tons of carbon (MtC), more than 22,000 MtC of that is at risk of deforestation or degradation because it is found in regions where the local communities do not enjoy formal recognition of their claim to the land.

A more recent study not only found that well-trained indigenous technicians are every bit as capable of collecting the necessary data to monitor forest carbon stocks as professionals, but that in some cases, at least, they can do it quicker and cheaper than the professionals.

The efficacy of land titling as a forest protection measure are less clear, however. But now the authors of a study published in the Proceedings of the National Academy of Sciences (PNAS) last week say they found that forest clearance is actually reduced by more than three-quarters and forest disturbance by roughly two-thirds over the two-year time span immediately following the granting of land title to an indigenous community.

A team of researchers with Washington, D.C.-based research institution Resources for the Future, the Inter-American Development Bank, and the Carnegie Institution for Science used high-resolution satellite images to examine the 11 million hectares (over 27 million acres) of forest that have been titled to more than 1,200 indigenous communities in Peru since the mid-1970s. They say their findings, which focused on the effect titling had on forest clearing and disturbance in the Peruvian Amazon between 2002 and 2005, suggest that the increasing trend towards decentralized forest governance via granting indigenous groups and other local communities formal legal title to their lands could play a key role in global efforts to slow both tropical forest destruction, which the researchers note is responsible for about the same amount of greenhouse gas emissions as the transportation sector, and climate change.

“Granting indigenous and other local communities formal title to the forests that have traditionally sustained them is probably the most important trend in tropical forest policy over the past 30 years,” Dr. Allen Blackman, a researcher with Resources for the Future and the study’s lead author, said in a statement. “These local communities now manage almost a third of all forests in developing countries, over twice the share currently found in government-run protected areas. Yet we know very little about titling’s effects on forest cover.”

Blackman and his co-authors say that theirs is the first peer-reviewed research to look at how granting land title to indigenous communities impacts forest cover. And the study clearly shows that, in Peru, the overall effect of titling is the protection of forests, according to Blackman. “That implies that titling could be an effective forest conservation and climate strategy in other tropical countries, although additional research is needed to test that hypothesis.”

The Monitoring of the Andean Amazon Project (MAAP) found that nearly 4.5 million acres (1.8 million hectares) of Peruvian Amazon forest was cleared between 2001 and 2015, “with a steadily increasing trend.” The major drivers of deforestation in the Peruvian Amazon, MAAP said, are conversion to agriculture, conversion to cattle pasture, gold mining, illegal coca cultivation, and roads.

The authors of the PNAS study hypothesize that granting land title to indigenous communities reduces deforestation and forest degradation “by ratcheting up formal and informal regulatory pressure.” But, due to the limited nature of the available data, they were unable to project the effects on forests beyond a two-year timespan.

“Future research can build on this study in at least two ways,” they write. “Field research combining qualitative and quantitative survey-based methods is needed both to identify the causal mechanisms driving the effects of titling on forest cover change that we have described and to understand better how these effects are moderated by community characteristics. In addition, remote sensing studies like ours can be applied to other countries, and over longer time periods, to monitor and quantify the effects of community land titles on forest governance and conservation.”

While the researchers point to the need for more study into the impacts of titling as a forest conservation strategy, they write that their results “strongly support the notion that awarding land title to indigenous and/or local communities can, at least in the short term, help protect forests. The cascading effects include biodiversity protection, carbon sequestration, water resource provisioning, and a host of other ecosystem services considered vital at local to global ecological scales.”

This article was originally published at Mongabay. It has been re-published at IC under a Creative Commons Attribution-NoDerivatives 4.0 International License