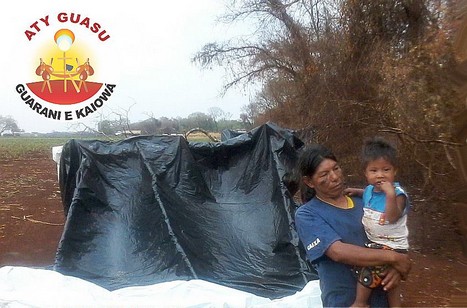 The Guarani community of Apyka’i together with The Aty Guasu Council of the Kaiowá have retaken traditional lands in the municipality of Dourados, in Mato Grosso do Sul, Brazil.

The Apyka’i community–having already waited two decades for the government to demarcate the land in question–finally decided that enough was enough. Around 9pm on Sept. 15, 2013, the community returned home, where they grew up and lived until the land was criminally taken from them.

For the past 14 years, The Apyka’i community has been living and dying at the edge of a road–federal highway BR-463, which links the city of Dourados to Ponta Porã.

“There, at the side of the road, the children go hungry, become sick and the parents do not know where to get food, because today it has no land to cultivate, game animals no longer exist, nor is fishing possible because of the constant pollution and deforestation that put an end to our natural diet,” the Apyka’i community states in a joint letter with the Aty Guasu Council. “For all of these reasons our community decided to retake the TEKOHA, the traditional land, where the spirit and soul feel joy, even through difficulties and sufferings.”

Now that the Guarani have returned home, they are demanding that the Brazilian government and judiciary respect and guarantee their rights.

“Enough of the omission, we will no longer accept continuing government treatment of the indigenous Kaiowá and Guarani people with contempt, because this is part of a policy that denies our existence, denies our rights and imposes a practice of silent genocide. For decades we expected these issues surrounding our rights to be resolved, in a peaceful manner, but the government does not appear to want a ‘peaceful’ solution; it appears to want, in the conquest of our lands, the shedding of our blood. It appears that the Brazilian government and justice want our death.”

Echoing the sentiment of the IdleNoMore movement in Canada, the Guarani continue,

“Today, we realize that if we do not paint ourselves and pick up our arrows, cudgels and take action we will continue to suffer starvation, thirst, suffering and injustice. In the meantime, upon our land the fazenda [plantation] owners profit, devastate, exploit, contaminate the earth and nature. And this we will no longer accept, as a question of justice. No more waiting, no more going around circles, we are retaking the land that is ours, because the lives that we have lost during the wait for the Brazilian courts are unacceptable.”

According to NGO Reporter Brazil, the Guarani land was leased for the planting of sugarcane by the ethanol producer Usina São Fernando. The plantation is a joint enterprise of Bertin Group, one of the largest slaughterhouses in Latin America and Agropecuária JB which specializes in breeding genetically modified cows.

Since retaking the land, the Guarani-Kaiowá community of Apyka’i has reported that security guards
have issued several death threats. A group of men also “threw a liquid poison in the water” and then promised they will attack and evict the Guarani. A company lawyer has also since warned that an eviction order is on the way.

The Aty Guasu Council said in a recent statement, “It is very clear to us and Guarani Kaiowa that [we are in] imminent risk of suffering violence both by gunmen [and] the federal court”.