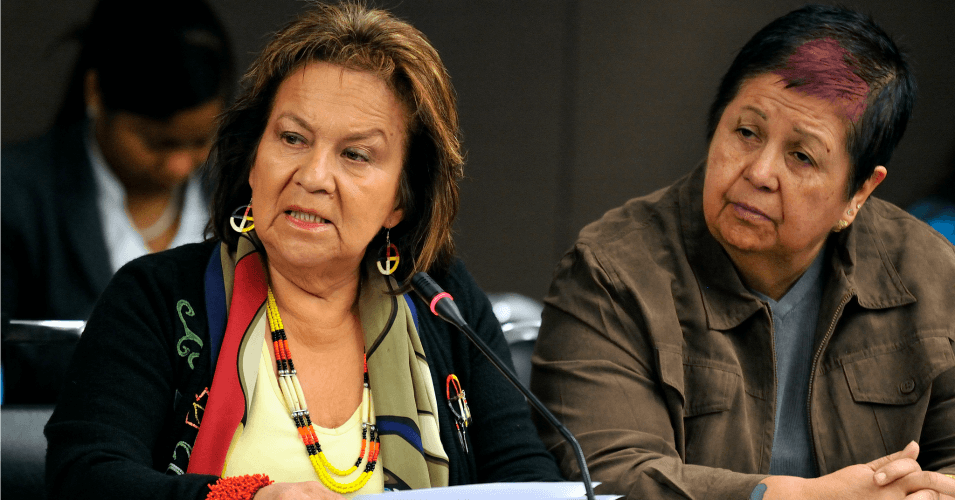 Human rights commission points to colonization, poverty, and discrimination as root causes of violence against Indigenous women and girls
Jeannette Corbiere Lavell of the Native Women’s Association of Canada and Sharon McIvor of the Canadian Feminist Alliance for International Action speak to the Inter-American Commission on Human Rights in 2012. (Photo: OEA-OAS/flickr/cc)
Support our journalism. Become a Patron!

The Canadian government on both federal and provincial levels, as well as law enforcement officials, have “failed to adequately prevent and protect Indigenous women and girls from killings, disappearances, and extreme forms of violence,” according to a report released Monday by the Inter-American Commission on Human Rights, an autonomous arm of the Organization of American States.

The Commission’s report (pdf), described by Reuters as “damning,” points to colonization, long-standing inequality, and discrimination as root causes of that violence, and says Canada is obligated under international human rights law to address these underlying factors in order to stem the crisis.

The document reads, in part:

The IAHCR stresses that addressing violence against Indigenous women is not sufficient unless the underlying factors of racial and gender discrimination that originate and exacerbate the violence are also comprehensively addressed. A comprehensive holistic approach applied to violence against Indigenous women means addressing the past and present institutional and structural inequalities confronted by these women. Elements that must be addressed include the dispossession of their land, as well as historical laws and policies that have negatively affected indigenous women, put them in an unequal situation, and prevented their full enjoyment of civil, political, economic, social and cultural rights.

The two-year investigation was requested by the Feminist Alliance for International Action and the Native Women’s Association of Canada (NWAC), which called the report “groundbreaking.”

“Canada is legally required to address the violence against Indigenous women fully and effectively,” said NWAC vice-president Dawn Harvard. “This is not a matter of choice. Our obligations under international human rights law require us to eliminate the discrimination which causes the violence and to ensure that Canada’s institutions—including the police and the justice system—respond effectively when Indigenous women disappear or are murdered.”

The current system works quite differently, charges the Commission’s report. “Family members of missing and murdered Indigenous women have described dismissive attitudes from police officers working on their cases, a lack of adequate resources allocated to those cases, and a failure to investigate and recognize a pattern of violence,” it reads.

Advocates also echoed the IAHCR’s recommendation that Prime Minister Stephen Harper’s administration create a national-level, coordinated action plan or make a nationwide inquiry into the issue of missing and murdered Indigenous women and girls—something it has been slow to do, despite the fact that Indigenous women are significantly over-represented as victims of homicide and are also three times more likely to be victims of violence than non-Indigenous women.

The Royal Canadian Mounted Police said last May that 1,017 Aboriginal women had been murdered between 1980 and 2012. Another 108 are missing under suspicious circumstances, with some cases dating back to 1952. Only 53 percent of murder cases involving indigenous women and girls have led to charges of homicide, while 40 percent of murder cases remain unsolved. That compares with an 84 percent clearance rate for homicides in Canada as a whole.

Last year, of such violence, Harper said: “We should not view this as sociological phenomenon. We should view it as crime…The vast majority of these cases are addressed and are solved through police investigations.”

However, the Commission’s report suggests “the scope of Canada’s obligations is much broader,” human rights lawyers Sharon McIvor, Shelagh Day, and Gwen Brodsky wrote Monday. “Canada has to address the risk factors that cause and perpetuate the violence. Specifically, the Commission tells Canada that it must combat the poverty of Indigenous women, improve education and employment, guarantee adequate housing and address the disproportionate application of the criminal law against them.”

Writing at the Canada-based Blogging for Equality, they continued:

The root causes of the high levels of violence against Indigenous women, the Inter‑American Commission says, lie in a history of discrimination beginning with colonization and continuing through laws and policies such as the Indian Act and residential schools. This history laid the foundations for pervasive violence and created the risks Indigenous women face today, through economic marginalization, social dislocation and psychological trauma.

In this way, the Inter‑American Commission directly refutes the Prime Minister’s claim that this is a matter of individual crimes, not a sociological phenomenon. The Commission says clearly that there is a broad and known pattern of heightened risk and vulnerability, and the risk factors must be addressed.

A recent survey by the non-partisan, Vancouver-based Angus Reid Institute found that nearly three-quarters of Canadians back a national inquiry into the issue of violence against Indigenous women.

That view is shared by many Canadian officials, activists, and organizations, some of whom took to Twitter to voice their support.

#canlab supports the call for a National Inquiry on #MMIW. The government should take the IACHR report to heart and do the right thing.

How many different ways does it need to be said that there must be a national action plan & a national enquiry #MMIW http://t.co/CNcDCIo2YB

“No doubt some in the government will see this report as another 125 pages to ignore and argue that no further study is required,” wrote Meghan Rhoad of Human Rights Watch on Tuesday. “That would be a mistake…With a national roundtable on the murders and disappearances coming up in February, the government should take this opportunity to announce its intention to form an inquiry and begin consultations.”

“The commission’s report shows that the international community cares about the lives of Indigenous women and girls,” Rhoad continued. “So does the Canadian public. The government should do the same.”