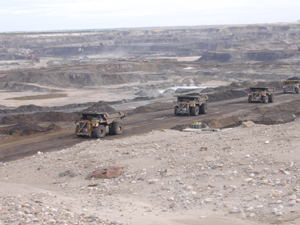 In this video you’ll find Celina Harpe, an Elder who’s lived in Fort MacKay for all her life, talking about the reality faced by her people today.

Fort MacKay is a community located in Northern Alberta that’s populated by about 500 (mostly Cree) People–a community that exists on top of, and literally surrounded by naturally occurring tar sands (also known as oil sands).

In the 1960’s Companies began to arrive in Fort Mackay to extract the oil. At first there were only a few, but the gettin’ was all too good.

There’s about 30 companies operating in the region today, who’ve altogether transformed this once-pristine environment into an arid desert.

To illustrate, I turn to an article written by Macdonald Stainsby titled The Richest First Nation in Canada:

Painfully, the people of For Mackay must include themselves in that. Celina Harpe points out in the video that before the companies came, her people only ever died of old age, but now they find themselves dying “right and left–young people 37, 34, 43” from Cancer.

“They spoiled–they ruined our water, the air. Pretty much everything else,” she says. “The animals, the berries, all our livelihood. “We can’t, there’s no more…”

It’s a massive human rights an environmental disaster that most Canadians are oblivious about–and seeing as how the tar sands cover a region about the size of Florida–it is one that is not isolated to Fort Mackay alone. There is Fort Chipewyan, the Mackenzie River Valley, and of course Fort McMurray (video documentary ) to name a few.

After watching the video, I encourage you to visit the website’s below to inform yourself further, and also to sign this petition which calls for a moratorium on oil sands development.

As well, there’s an ongoing campaign organized by the Dominion which you might like to help with. They are attempting to publish and distribute 20,000 copies of its upcoming, special issue on the Tar Sands in November.