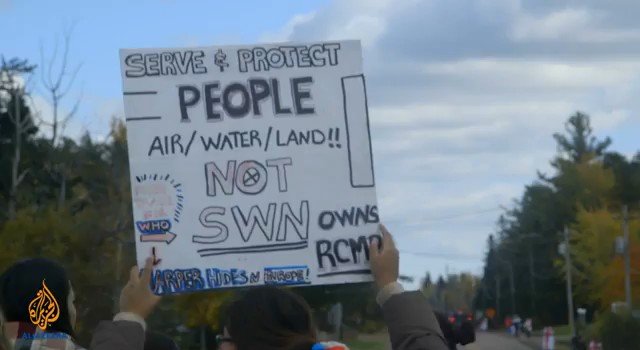 Elsipogtog: The Fire Over Water

On October 17, the Royal Canadian Mounted Police raided a protest site set up by Mi’kmaq people and their supporters trying to prevent a Texas-based corporation from fracking.

The company had received rights to explore for shale gas by the province of New Brunswick.

The raid carried out by police, with dogs and automatic weapons, turned to chaos as residents of the Elsipogtog First Nation arrived to confront them. Police pepper sprayed the elders and fired sock rounds to control the crowd. Six police vehicles were set ablaze, and some 40 people were arrested.

It was the most spectacular eruption yet, of a struggle led by indigenous people to protect the land they say they have never ceded and water they consider sacred – a struggle that grew quietly for three years, and shows no sign of slowing down.

Fault Lines travelled to New Brunswick to ask why their fight caught fire, and find out what happens when Canada’s First Nations say no to resource extraction projects they oppose.