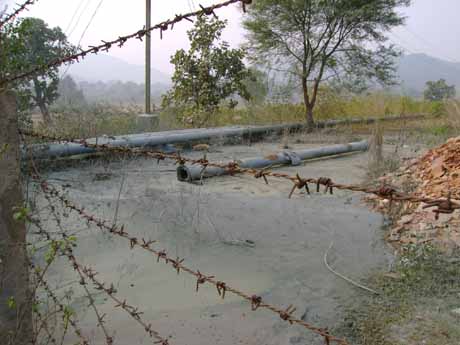 Pipes carrying uranium tailings in the eastern state of Jharkhand, India, burst on the 16th of August, “spewing the village of Dungridih with radioactive waste,” according to a recent report by Sanhati

It’s the latest in a series of uranium spills that have taken place over the last two years:

Incident 1: December 2006
In the first instance of tailing pipe leakage in Dec 2006, the radioactive waste contaminated the local water canal in Dungridih, killing all acquatic life in the channel. UCIL officials only reached the site after the villages blockaded the road, after the waste had been spilling for 9-10 hours. A report of this incident is available here: http://www.jadugoda.net/Accidents/index.html

Incident 3: February 2008
In Feb 2008, tailing pipes burst again in Dungridih and radioactive sludge entered the streets and houses of the local villagers. After a sustained campaign by local activists, the UCIL CMD, Mr Ramendra Gupta informed villagers that they would be relocated to safer places and all protective measures will be taken to ensure that no further leakages happen from the tailing pipes. However, no such steps have been taken so far.

Incident 4: July 2008
In July 2008, Jadugoda received record rainfall, which caused tailing ponds at Turamdih to spill over into the village ponds and lakes. UCIL acknowledged this spill but claimed that there was nothing they could do to prevent it. (”Radioactive waste flows into village” http://www.hindustantimes.com/StoryPage/StoryPage.aspx?id=9dcc11cc-d424-4900-95a1-41310e6daffe )

Incident 5: August 2008
In August 2008, the tailing pipes have burst again in Dungridih, and the radioactive sludge flowing through them at high pressure has been sprayed over 10-12 houses.

UCIL readily admits that the previous incidents were caused by ‘poor maintenance and negligence’, however, the company is claiming that the most recent leak is a result of sabotage by the villagers.

It’s an insult to a community that’s greatly suffering because of UCIL’s incompetence — and moreso because of their refusal to respect the community’s land rights. The company displaced the village when they were building two of their three tailing ponds.

It looks as if the uranium company has never given any compensation or aid to the village, however they now seem poised to relocate them. “Technically ‘illegal’ settlers on UCIL land,” explains Sanhati, “the UCIL [maintains] that it is under no compulsion to resettle these villagers–but will do so out of compassion. Having thus systematically illegitimized these original inhabitants of the land and put their lives and livelihoods at danger, the UCIL is now conferring a favor on these communities by now displacing them once more and resettling them at safer locations.”