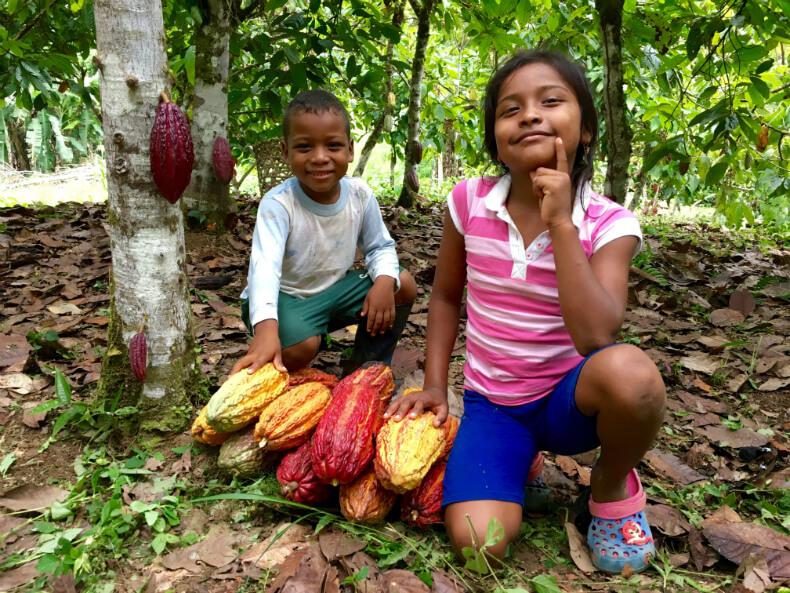 A sweet moment with children of the Awá community of Guadualito in their diverse chacra (rotational farm plot). Shade grown cacao is a good alternative to oil palms in the Chocó rainforest ecoregion (Photographed by Hazlewood on Oct 30, 2016)
Support our journalism. Become a Patron!

After six and a half years of combined suspense and patience, finally on January 11 2017, Ecuador’s Esmeraldas Provincial Court handed down its decision on the world’s first constitutionally-based Rights of Nature lawsuit.

This demand for justice—which simultaneously begs for a shift in merely human rights-based paradigms—was made by people who literally and figuratively live in the margins of Ecuador: The Canton of San Lorenzo.

This once-rainforested Chocó ecoregion—part of the Tumbes-Chocó-Magdalena Biodiversity Hotspot—is located along Ecuador’s northwest Colombian border in the coastal province of Esmeraldas, which is the only province in the country where almost half the population is Afro-ecuadorian. Even many Ecuadorians themselves are not aware of the presence of Indigenous nationalities and territories in Esmeraldas, where—not by coincidence—you can find the majority of the remaining (less than 3%) Ecuadorian coastal lowland rainforests. 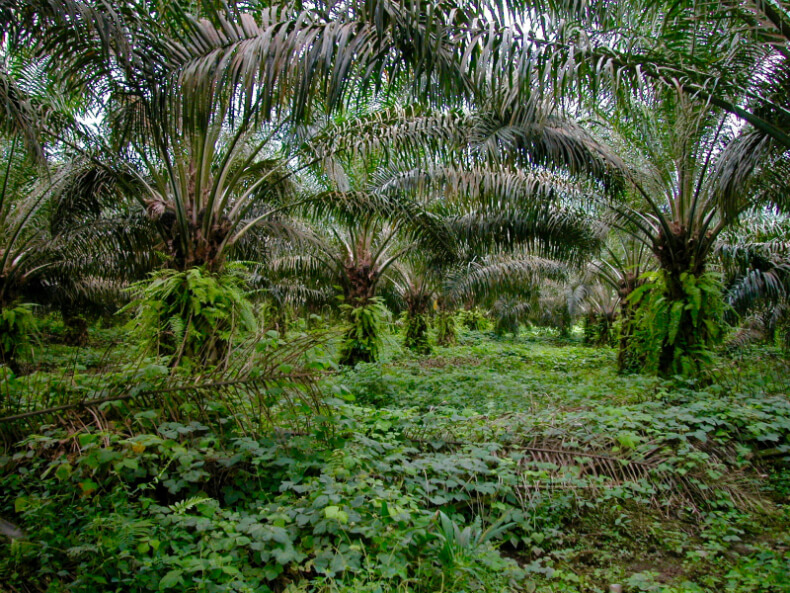 A view into the canopy of an oil palm monoculture, where the companies plant highly invasive kudzu (genus Pueraria) vines to control for other weeds and for fixing nitrogen. (Photographed by Hazlewood on Nov 21, 2007).

The plaintiffs—the Afro-descendant community of La Chiquita and the Awá community of Guadualito—filed the landmark intercultural constitutional court case against Los Andes and Palesema Oil Palm (i.e. African oil palm, Elaeis guineensis) Companies, on July 23, 2010, a little over two years after Ecuador recognized the Rights of Nature in its 2008 constitution.

Requesting repairs in relation to the Rights of Nature, Living Well (Sumak Kawsay in Kichwa, El Buen Vivir in Spanish), and pluricultural self-determination over territory, the plaintiffs contended that both Los Andes and Palesema Oil Palm Companies were responsible for massive deforestation, widespread biodiversity loss, excessive river pollution, and the subsequent deterioration of health and food sovereignty of the two communities. With the plantations surrounding their ancestral territories—and Chiquita River’s headwaters falling within the limits of the plantations—the communities asked the court to suspend any and all harmful plantation activities. They also asked for the companies to repair the damages.

For more information about the case see http://www.ienearth.org/support-la-chiquita-and-guadualito-ancestral-communities-and-nature/

Though acknowledging that reparations were necessary, Judge Juan Francisco Gabriel Morales Suarez only “partially” accepted the communities’ claims, demonstrating that the judge agrees with the evidence provided by the plaintiffs while also evading a determination that the oil palm companies are guilty as charged. As one La Chiquita resident stated, “The sentence does not have either heads or tails.”

For example, Judge Suarez ordered the Ecuadorian State to restrict future expansion of the agricultural frontier with oil palm in San Lorenzo canton, and this is indubitably a victory for La Chiquita and Guadualito!

Paradoxically however, of the seventeen criteria established by the sentence for reparations of the social and environmental damages, the Los Andes and Palesema Oil Palm Companies were charged with just three responsibilities:

In reaction to these three criteria, the community’s current lawyer stated, “It is absurd and ridiculous to make a sentence that determines that damages could be remediated through a history course for oil palm workers—not even if the world’s greatest experts were the participating professors.” 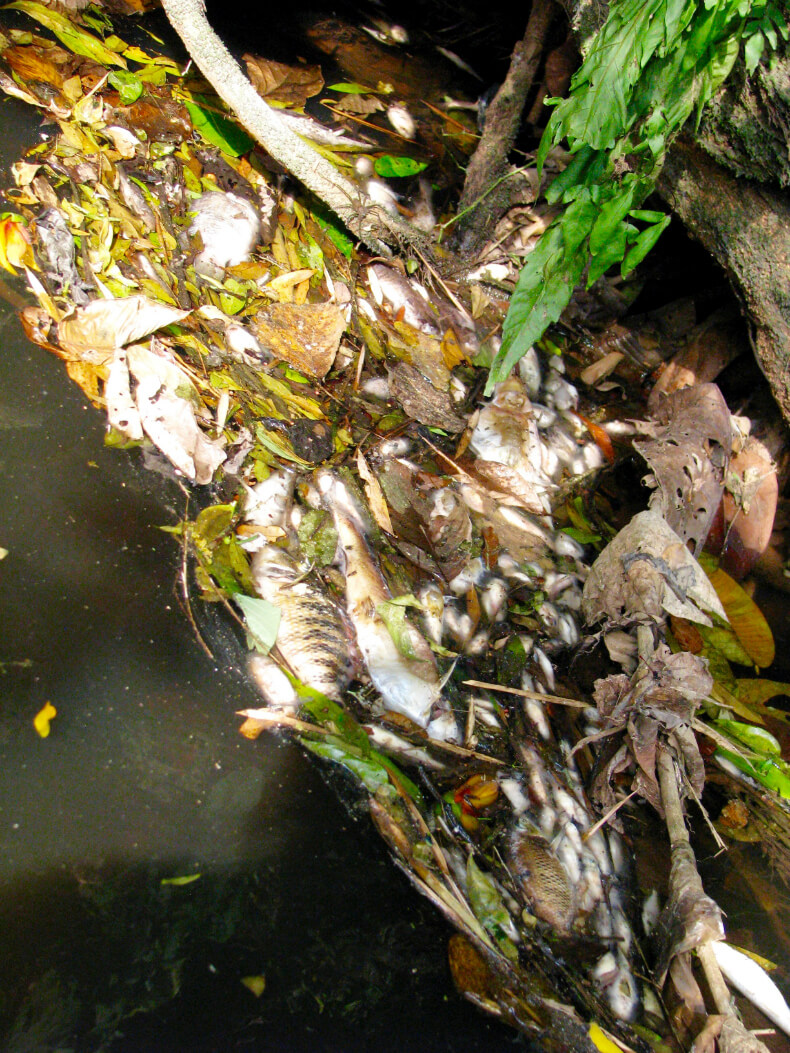 A mass of dead fish on the Surface of the Chiquita River resulting from Los Andes Palm Oil Extractor throwing its residual, boiling waste waters into the river, which they continue to do—the last time was Feb 12, 2017 (Photographed by Hazlewood on Nov 21, 2008).

It should also be noted that, despite the recognition of the need for reparations, Judge Suárez distributes most responsibilities to remedy damages in the communities between twelve state and provincial institutions. The sentence thus limits a comprehensive approach and the clarity and effectiveness necessary for following up with the execution of the actions.

It is very surprising that most the responsibilities for remediating damages were assigned to the state and not oil palm companies. The responsibility of the Ecuadorian State, both historically and present-day, in the neglect towards and socio-economic marginalization of the region of Esmeraldas is undeniable; its absence has incubated the pillage of its resources and subjugated the environment and the people living there to oppressive conditions.

Nevertheless, it is not clear why the judgement generates a transfer of responsibilities from the Los Andes and Palesema Oil Palm Companies to the state, when the claim was made against the latter. The two oil palm companies have been effectively freed from their economic, moral, social and cultural responsibilities towards the two communities. Instead, the sentence declares that it is now that the state must finally assume its responsibilities to the canton of San Lorenzo and accept the primary role in repairing the oil palm companies’ damages!

And so far, the situation isn’t getting any better for either community. A month after the judge has made his sentence public—as of Feb. 12, 2017—Los Andes Oil palm company continues to dump chemicals and boiling waste water into the river and extract palm oil from plantation fruit.

La Chiquita and Guadualito members meet to strategize next moves in their struggle in defense of their own and Nature’s rights. Decades of legal processes have required a great deal of traveling back and forth between the two communities, which are located about 45 minutes apart (Photographed by Hazlewood on Oct 30, 2016)

The two communities of La Chiquita and Guadualito make the following declaration in relation to the sentence:

After waiting so many years, we feel a humiliation and deception by the Court. Even if the sentence is partially in favor of our communities, the judgement does not recognize any aspect of the Los Andes and Palesema Oil Palm Companies paying us for the repairs and damages caused to our environment, damages that have directly and negatively affected us.

In this way, the sentence minimizes and excludes all we have suffered and how our own and Nature’s rights have been systematically violated. Therefore, we, the residents of Guadualito and La Chiquita, declare our disagreement with the judge’s decision.

Although we have been politically united because our territories are close to one another’s and have been negatively affected by the oil palm companies, we have consistently maintained that we are two distinct ancestral communities. Yet, the sentence does not address this difference between us and, therefore, infringes upon our rights of pluriculturality to self-determination.

For example, the Ministry of Education and the Ministry of Health are tasked with building a millennium school and a health center at a center point between the two communities. This implies that these developments take place on land that does not belong to either of the two communities. In fact, this land is owned by the oil palm plantations! We want to be clear that it does not make sense that the judge treats us as just one community.

This is the first lawsuit of this magnitude that is based in the 2008 Ecuadorian Constitution in respect to the Rights of Nature, to Living Well, and to pluricultural self-determination and intercultural organization in defense of ancestral territories. We have lost our flora and fauna, our rivers are dead, and, we—humans, animals and fish—have all suffered damages and we are adversely affected.

We continue onward. Until now, we have submitted a document requesting the extension and clarification of the judgment in relation to the points described above. Based on the response we receive we will decide if we will appeal.

We have taken this opportunity to change who will legally represent us because we have decided to stand even stronger in defense of our rights and those of nature. For fear of being criminalized by the state or upsetting the judge’s decision, we cannot go out and publically and peacefully protest in defense of ours and Nature’s rights.

What we can and will do, however, is disseminate internationally the outcomes of our struggles. We will make our make our demands for justice known to the world through the media and social networks. We will see to it that more and more allies accompany us until our claims are adequately addressed. We know that with support of the international society we will be able to claim our rights to living well.

Our communities have been trampled down and had our rights violated by the oil palm companies, who enjoy great economic and political power. The world has not seen or heard of what we have had to go through so far. This is going to change from now on! We want the world to know that our communities exist. We want all humanity to know about our long struggle to ensure that our rights are respected.

Ecuador and the world can unite with and assist us with further ideas and information, with economic and moral support, and to spread through the media and social networks our emblematic case and other cases in which environmental and human rights have been violated by the oil palm industrial complex.

The Ecuadorian authorities must acknowledge the social, cultural, and environmental damage caused by sowing monocultures of African oil palms, by the palm oil extraction processes, and by the immediate and residual negative impacts of the oil palm industry assumed by local communities.