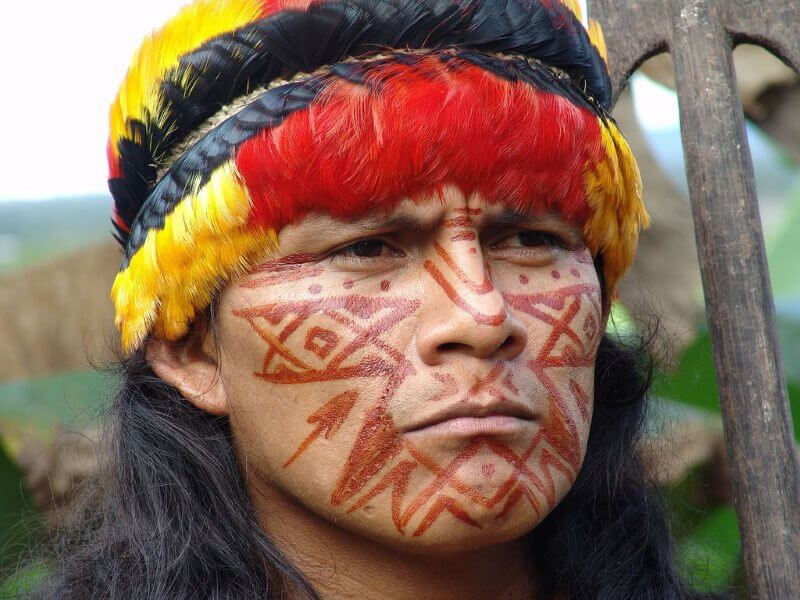 COP21: Call for international treaty on rights of nature and communities

Portrait of Shuar Indian in Ecuador's Amazon, where gross violations of human and environmental rights have been committed by oil companies. Photo: 00rini hartman via Flickr (CC BY-NC-SA).
Support our journalism. Become a Patron!

A new initiative launched alongside COP21 in Paris this week is aiming to “Adopt and implement an international treaty to prevent and enforce against corporate human rights violations” and “Incorporate rights of nature principles into existing human rights instruments and bodies.”

The manifesto to end ‘co-violations’ of nature’s rights and human rights is set out in a report that examines 100 such examples worldwide, from the Arctic home of the Sami to Shuar territory in the Ecuadorian Amazon.

Linda Sheehan, Executive Director of the Earth Law Center (ELC) described how these individual co-violations reflect a global pattern of violence that is a result of “treating the natural world as property to fuel economic growth, and the myth that this can be infinite.

“Across the globe, corporations and governments injure both people and ecosystems … These injuries increasingly represent simultaneous violations, or ‘co-violations’, of human rights and nature’s rights. Every year hundreds of people are killed defending their lands from destructive projects, and as a result of their pollution and destruction.

“We must reverse the path we’re on towards more and more of these co-violations by evolving our laws and courts to recognize that our well-being is inextricably linked with the Earth’s”, said Sheehan.

The report, Fighting for Our Shared Future describes ‘co-violations’ as incidents in which both people and ecosystems are harmed due to destructive processes such as mining, fracking and industrialized monoculture farming.

And it asserts nature’s rights “to exist, thrive and evolve”, in accordance with the Universal Declaration of the Rights of Mother Earth adopted at the World Peoples’ Conference on Climate Change in Cochabamba, Bolivia in 2010, describing the relationship between human rights and nature’s rights as “intertwined and co-dependent”.

Rights of nature for climate justice in Paris

At the Paris launch, impassioned witnesses from around the world, including Vandana Shiva, Chief Raoni Metuktire and Pablo Solon, shared examples of how corporations, states and international bodies like the World Bank are violating nature’s rights from Brazil to the Philippines. A panel of judges, made up of lawyers and ecological justice experts, offered their judgements on the litany of crimes presented.

The Tribunal’s opening session was dedicated to discussing testimonies from climate-related violations of the rights of nature, stemming largely from massive fossil fuel extraction projects like those at the Alberta Tar Sands and the industrial food system, which accounts for 44-57% of global emissions.

Witnesses from civil society and indigenous communities also denounced the solutions being promoted in the official COP21 negotiations, including REDD schemes and biofuel projects. Among them was Osprey Orielle Lake, Director of the Women’s Earth and Climate Action Network (WECAN): “Sadly the emphasis is all on carbon markets, offsets and the financialization of nature rather than the recognition of Mother Earth’s sacredness”, she said.

At a side event discussing indigenous solutions to climate change, Tribunal judge and Diné earth rights activist Tom BK Goldtooth argued that as long as we continue to treat nature as property rather than a rights bearing being, we are unlikely avert the climate crisis:

“The relationship of love and care Indigenous Peoples have to Mother Earth is critical for addressing climate change … the big challenge facing us is how we communicate this relationship with people from the global north here at the UNFCCC and challenge the colonial concept of dominion over nature.”

At greatest risk: the global south, and indigenous peoples everywhere

The report’s findings stem from an extensive research project undertaken by the Earth Law Center with assistance from the Yale Environmental Protection Clinic. Gathering together and analyzing 100 documented examples of co-violations, the authors highlight several worrying trends within this newly-coined category of rights violations.

That co-violations are frequently connected to extractive and energy industries is a particularly pertinent finding in the context of the ongoing COP21 talks. Critics of this year’s negotiations have been quick to point out that the texts under negotiation include no commitment by or obligation on governments to keep fossil fuels in the ground in order to reduce emissions.

The report also finds that indigenous peoples and communities from the Global South are the main sufferers of co-violations.

Four in depth case studies from Shuar Indigenous territory in Ecuador, Sami lands in Scandinavia, Lake Chad and Ontario’s ‘chemical valley’ reveal how co-violations frequently involve the eviction of communities from and/or the destruction of their lands, the disruption their cultural and spiritual life, the murder of those who choose to defend their lands and general community impoverishment.

With recent studies showing that indigenous peoples are guardians of 80% of the world’s remaining biodiversity, the consequences this concentrated wave of violations holds for nature is equally grave.

These findings add further urgency to an analysis of the climate crisis put forward by climate justice groups; namely that those countries and communities who bear the least historical responsibility for carbon emissions are those who are most vulnerable to climate change.

“Addressing violations of the planet’s right to a healthy climate is needed to protect human rights overall”, the report states, going on to call for “a robust, binding, enforceable international climate change agreement that aims to eliminate climate-related human and environmental rights violations.”

A tribunal for the rights of nature

The Earth Law Center’s call for a paradigmatic shift in legal thinking follows the opening of the International Tribunal for the Rights of Nature, formally established by a people’s convention on 4th December in Paris.

An embryonic people’s court, the Tribunal first met in Ecuador in 2014. It exists to hear cases where nature’s rights, as recognized in the Universal Declaration on the Rights of Mother Earth, have been violated and produce judgements against transgressors of nature’s rights and human’s rights.

Though the Tribunal lacks the ability to make legally binding decisions, it provides a space to investigate and make visible the systemic injustices of ‘the war on nature’. It seeks to build moral pressure on governments and decision makers to recognize nature’s rights and help transform international and domestic legal systems to nurture, rather than allow the destruction of the Earth community at a time of multiple ecological and social crises.

“The ultimate aim is that the Tribunal will become a part of international legal frameworks and act like the International Court of Justice at the Hague”, says Shannon Biggs, co-founder of the Global Alliance for the Rights of Nature.

“We want the Universal Declaration on the Rights of Mother Nature to stand up next to the equivalent for human rights, and for countries to look to these rights as central to our justice systems everywhere. That’s what we’re building towards.”

The Tribunal represents a significant attempt to reverse ELC’s finding that “the sources of co-violations are rarely addressed adequately, if they are addressed at all.”

As a first step, the document urges individual states to establish their own legal structures that can then be built on internationally: “Nations can be role models for the international community and build local well-being by working now to:

Finally, it states, we must also look to ourselves. “As recognized by the Universal Declaration of the Rights of Mother Earth, every human being is responsible for respecting and living in harmony with Mother Earth and must work to ensure that the pursuit of human wellbeing contributes to the wellbeing of Mother Earth, now and in the future. It is our responsibility to act now.”