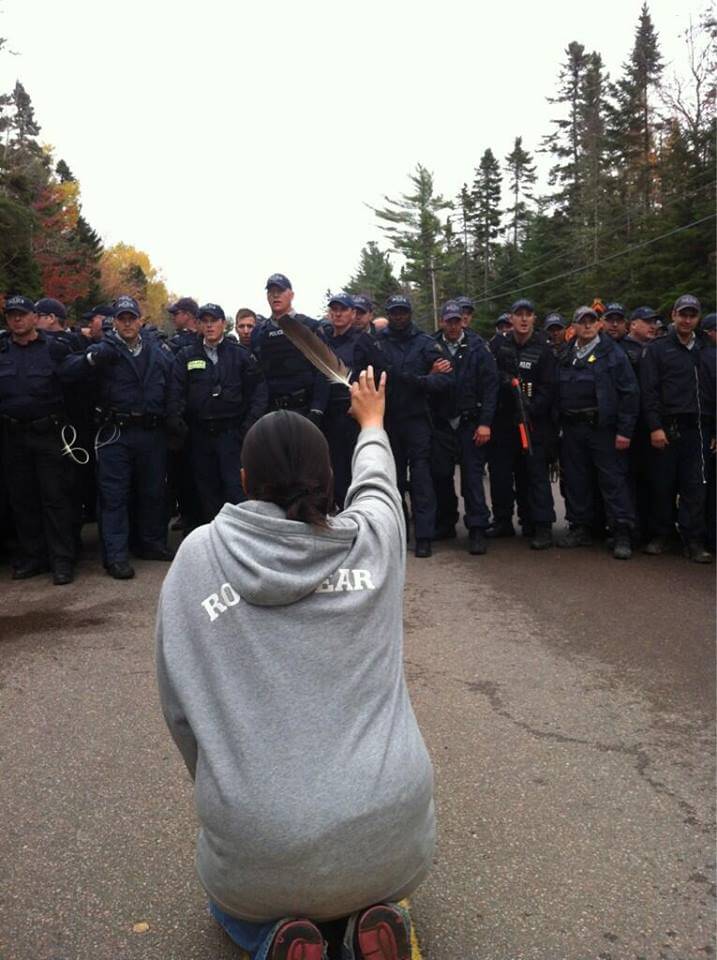 As policymakers gather in Paris for climate change talks, it is difficult not to be cynical about how committed they are to actually creating the fundamental political change necessary to address the gathering environmental storm. Despite the fact that Indigenous Peoples either ‘own, occupy or manage up to 65 percent of the Earth’s land surface’ or that speakers at a pre-COP21 UNESCO conference declared Indigenous knowledge to be ‘indispensable’ in the fight to protect the planet, Indigenous Peoples have been largely ignored in national, and international, plans to address climate change.

More than this, however, in seeking to protect their lands and resources, Indigenous Peoples have found themselves not only the victims of violence and wide-scale human rights abuses, but also as the targets of anti-terror legislation that is used to curtail resistance to government policies and actions that have either directly contributed to the ongoing degradation of the environment or have indirectly assisted and permitted multinational corporations and international organizations to operate, at the expense of the environment, for as long as development and profit remain ever-present.

Indigenous Peoples have a history of being labeled ‘terrorists’ when they assert principles of self-determination against the respective government, or demand the application of ‘Free, Prior, and Informed Consent’ from government or non-government organizations seeking entry into lands under Indigenous governance.

In the wake of the 1990 Oka Crisis in Canada, Canadian military consultants labelled Mohawks protesting over the encroachment of traditional land as ‘terrorists,’ a term that was used once again at a military debriefing in the Crisis aftermath.[1] Over two decades later, in 2013, protesters at the Mi’kmaq community of Elsipogtog faced a similar label when they protested hydraulic fracturing projects. Indeed in a leaked internal report, the Royal Canadian Mounted Police (RCMP) characterized environmental and First Nations protesters as ‘violent anti-petroleum extremists’. In the aftermath of both cases the Canadian state upped the level of securitization, in the former case by increasing military powers, and in the latter case by the Harper government bringing in Bill C-51, anti-terror legislation with a wide-ranging remit to act against any activity that ‘undermines the sovereignty, security or territorial integrity of Canada or the lives or the security of the people of Canada.’

The Harper government ‘all but waged war on First Nations’ and Bill C-51 was part of that. However in the wake of a decisive victory by Justin Trudeau and the Liberal Party in the recent Canadian elections, concern still remains around whether Bill C-51 will be amended. Although Trudeau’s party campaigned on a platform that included a promise to ‘legally bind Canada to the United Nations Declaration on the Rights of Indigenous Peoples’ Bill C-51 fails to consider ‘security’ from the perspectives and inherent rights of Indigenous Peoples. We should not be surprised. Hundreds of Indigenous Peoples across the globe maintain cultures and knowledge systems that promote sustainability, co-existence, and a mutual respect with the Earth, and yet have found themselves at the sharp end of government plans to allocate traditional lands to large-scale development projects that exacerbate climate change.

In Ethiopia, the government is leasing large tracts of lands to commercial enterprise and Indigenous resistance to this has been met by action against Indigenous Peoples under the guise of the government’s draconian ant-terror laws. Earlier this year, a number of Indigenous activists were arrested as they tried to leave Ethiopia to attend a food security workshop in Kenya Three of those arrested – Pastor Omot Agwa (Anuak), Ashinie Astin (Majangir), and Jamal Oumar Hojele – are now facing what Leslie Lefkow of Human Rights Watch has called “spurious terrorism charges [that] bear all the hallmarks of Ethiopia’s effort to silence critical voices.” This comes 10 years after Human Rights Watch reported on human rights violations against the Anuak in Ethiopia’s Gambella region.

Similarly, in a number of Latin American countries, measures taken against Indigenous activists are repressive and wide-reaching. In Ecuador, numerous Indigenous leaders have been charged with terrorism and sabotage, while in Chile an anti-terrorism law – one that allows for anonymous witness testimony and increased sentences – has been used against the Mapuche in a way that has ‘been applied in a confused and arbitrary fashion that has resulted in real injustice’, according to the Special Rapporteur on human rights and counter-terrorism, Ben Emmerson.

Only a few weeks ago, Human Rights Watch published a report on the sweepingly broad nature of Brazil’s anti-terror legislation. ‘Under the bill, “taking over” various sites, including roads, schools, or “public or private buildings,” is to be considered a “terrorist act,” if motivated by “political extremism” with the objective of provoking “generalized panic”.’ Considering the past actions of the numerous Indigenous Peoples in Brazil, the legislation would give a green light for any form of public collective dissent against environmental destruction to be labeled as ‘terrorism’.

That individual governments appear to be able to get away with this says much about the hostility of governments towards key principles of the UN Declaration on the Rights of Indigenous Peoples as well as the emptiness of the rhetoric spouted by international organizations about the value of Indigenous Peoples in the fight against climate change. Thus, although the World Bank states that it is ‘working actively and globally with Indigenous Peoples as partners in development, taking into account their views and special needs to help improve their lives’, at the same time, evidence has demonstrated that the World Bank supports industrial and development projects that have a serious impact upon the rights and security of Indigenous Peoples in the form of environmental degradation (deforestation, pollution of fresh water resources, destruction of flora and fauna) and severely limited access to natural resources.

Taken together and viewed in this context, the use of anti-terror laws against Indigenous Peoples does not protect the state and its citizens, but rather serve to securitize and then suppress Indigenous resistance at the expense of the environment.

As the Paris Climate Talks take place, Indigenous Peoples continue to be violently marginalized and silenced by the same governments that claim to be committed to reversing humanity’s role in climate change. However, until the international community understands the political expediency of anti-terror legislation in repressing Indigenous resistance to environmental destruction, governments and NGO’s will continue to pay lip service to the important role that Indigenous Peoples play in reversing climate change, developing climate change adaptation strategies, and implementing projects that mitigate the effects of climate change. Meanwhile, the earth’s frontline defenders, who contribute the least to global climate change, will continue to bear the brunt of its effects as they are vilified at home.

The authors would like to thank Kylie Courtney for her assistance in researching this article. All errors remain the authors own.