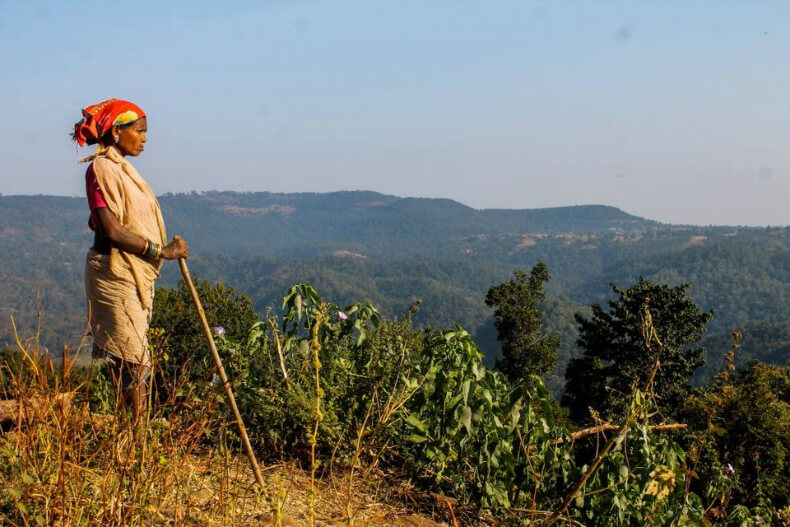 In the Tribal Belt of Central India, Indigenous communities are being manipulated, evicted and impoverished in the name of conservation
A Baiga woman surveys the land in Amaniya panchayat, Chhattisgarh, much of which falls in the area of the proposed tiger corridor between Kanha and Achanakmar National Parks. Photo: Heera Bai
Support our journalism. Become a Patron!

Throughout India today there are a total of 645 Adivasi communities recognized by the government. With a combined population of about 70 million, these communities maintain an impressive array of cultural identities, languages, customs and economies that go back millennia. But despite their resilience and their relative isolation from the perils of extreme extraction, Adivasis—the Hindi term for Indigenous Peoples—have not been able to escape any of the hardships that other Indigenous Peoples so often face around the world.

Across the Tribal Belt of Central India, where 90 percent of the population is still completely dependent on agriculture, indigenous communities are constantly being evicted from their ancestral lands to make way for development projects, industry, tourism and government-sanctioned conservation initiatives.

In the states of Madhya Pradesh and Chhattisgarh, the Baiga community have faced a legacy of evictions that dates back more than 30 years. They are constantly being forcefully, and often illegally, relocated from their fields and villages that live in and around the borders of the Kanha and Achanakmar National Parks. 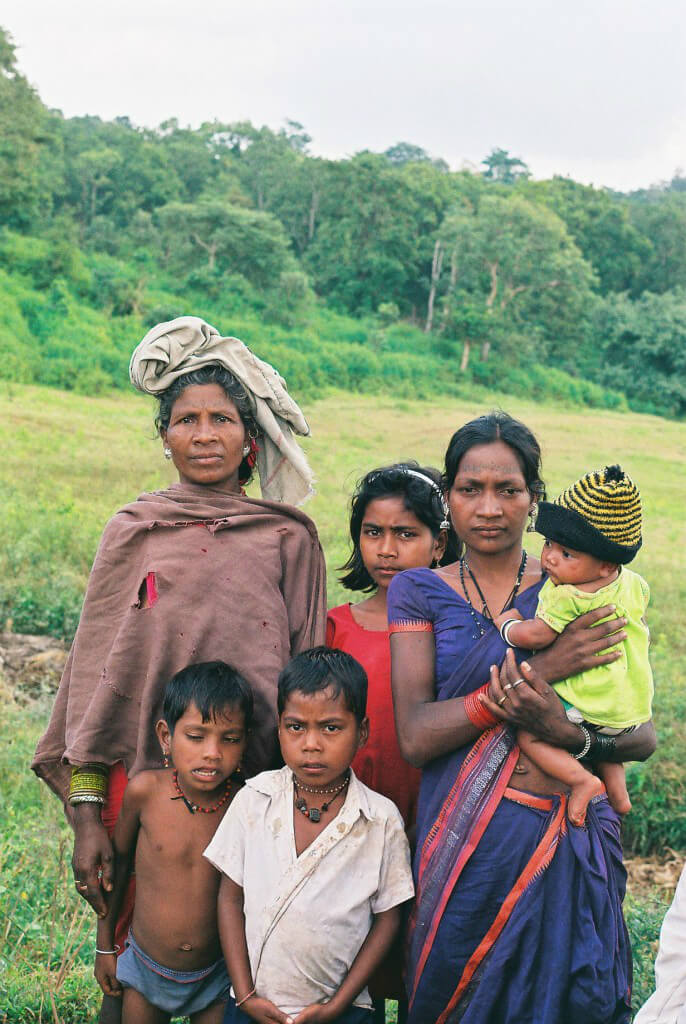 Women from Hirapur, a Baiga village which was relocated from Kanha National Park in the 1970s. “This lush green jungle – we can only see it, but we cant touch it. We cant take anything which was our traditions, our daily bread, it was everything to us. Our rights are written down in a book but we are illiterate.” Photo: Heera Bai

The Baiga are classified as a Particularly Vulnerable Tribal Group (PVTG) by the Indian Government, and the present adult generation had little access to education. The majority are illiterate and know no other language than their regional dialect. Their villages are incredibly isolated, accessible only by foot or motorbike on tracks through the forest. The distance between these villages makes cross-community solidarity or resistance logistically difficult, increasing their vulnerability to exploitation.

Until recently, the Baiga community was dependent on the jungle and the surrounding environment for survival. However, they existed in a symbiotic relationship with the forest generously providing them with everything they need including food, ‘jhari-booti’ (jungle medicine) and wood to build homes and tools. However, after decades of increasing rules and restrictions placed on their access to forest resources and the criminalisation of practices such as ‘bewar’ (shifting cultivation), their way of life has become increasingly difficult to maintain. 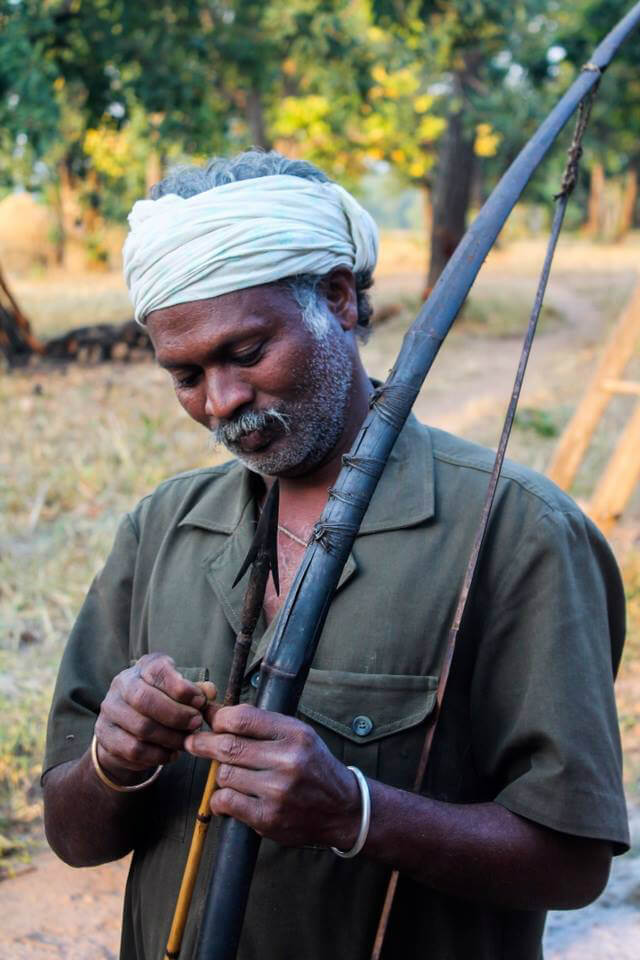 Noonsari, the makeshift village of displaced Baiga adivasi, in Mawai district Madhya Pradesh. This is a dhanoosna, a weapon used by their ancestors for hunting in the jungle. It takes a whole day to make a single arrow from peacock feather and cartilage. Photo: Heera Bai

“For us, only the jungle for us is good,” Bazaari Singh Baiga of the Peepatola village in Chhattisgarh said. “We don’t want fields or houses in another place. We want to stay living in the jungle, we don’t want to move to a city, where would we get wood from? We get everything we need from the jungle. If we moved from here we would die very quickly! We don’t buy things, we take everything from the jungle and make things ourselves with our own hands.” 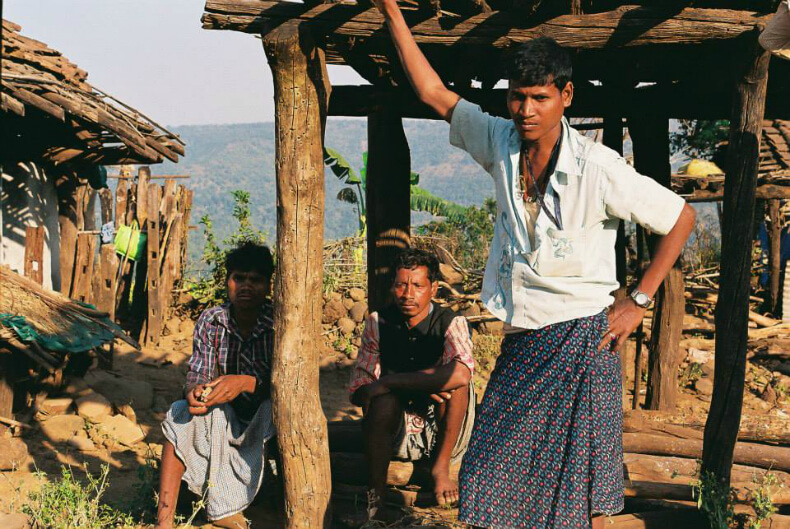 “We don’t want fields or houses in another place. We want to stay living in the jungle, we don’t want to move to a city, where would we get wood from? We get everything we need from the jungle,” says Bazaari Singh Baiga. Photo: Heera Bai

All Baiga villages in Kanha National Park in Madhya Pradesh have been displaced. The evictions began in the 1970s and the last five villages were evicted in 2013. It is a legal requirement that villagers give free, informed consent to the relocation of their village, but consent is forcefully taken after threats, harassment and manipulation.

“The Forest Department came and told us that if we don’t leave willingly they will bring elephants to trample our homes and fields,” Shakti Baiga said. Baiga lived in Benda, one of the last villages in Kanha evicted in 2013. “They brought documents into the village and made us sign it. But we’re illiterate, how could we have known that we were signing our land away?

“I had 5 acres of land in Benda. Here, I could only afford to buy 1.5 acres to support my whole family. I could only afford this land because chances are, this village will be also displaced in the near future. A new [Bhoromdeo] Wildlife Sanctuary has now been created and the fences are starting to go up around the village… There are only two families from Benda here, I don’t see any of the original community anymore.” 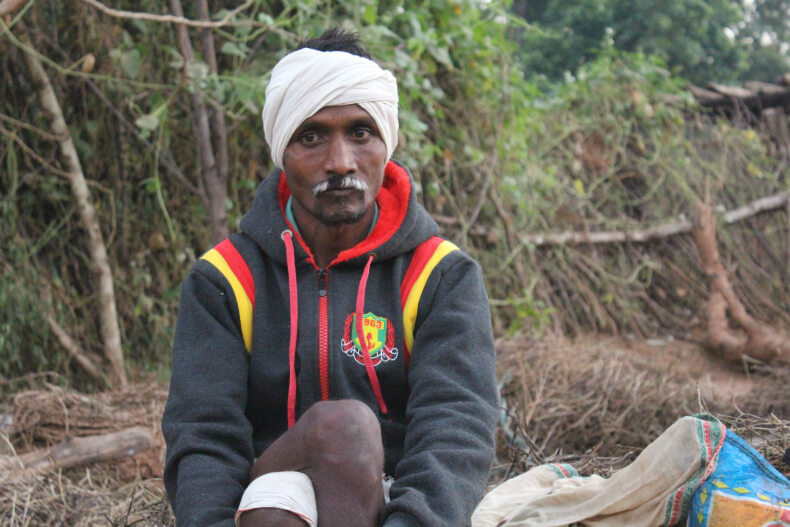 “How could we have known that we were signing our land away?” asks Shakti Baiga. Photo: Heera Bai

There is a strong World Wildlife Federation (WWF) presence in both parks. The infamous panda logo is seen in across the region, from the gates of the national park to small forest villages on the edge of the buffer zone. Despite denying any vested interest in tourism in Kanha, they offer $8,995 ‘tiger tours.’’ Survival International has confronted them about their complicity in illegal evictions in the National Park, but they have denied the illegality of these displacements.

The Forest Rights Act, implemented in 2006, supposedly recognizes ‘any traditional right customarily enjoyed’ by any ‘forest dwelling Scheduled Tribes’ or ‘Traditional Forest Dwellers’. These rights include not only those of forest habitation, but also ‘the right to cultivate for their livelihood, the right to collect minor forest produce, the right to graze cattle, the right to convert leases or grants (pattas) to titles, the right to manage the community forest resources, and the right to enjoy any customary/traditional practice.’

The Forest Rights Act also stipulates procedures for evicting a community from its land. The Panchayat Extension to Scheduled Areas (PESA) means that the Gram Sabha (village level decision making body) must give full, informed consent to the displacement. The community are supposed to be given three options: 1) Reject the eviction and stay on their land, 2) Agree to the eviction, and accept 10 lakh Rs in compensation, or 3) Agree to eviction, and move to a government provided Resettlement and Rehabilitation site. 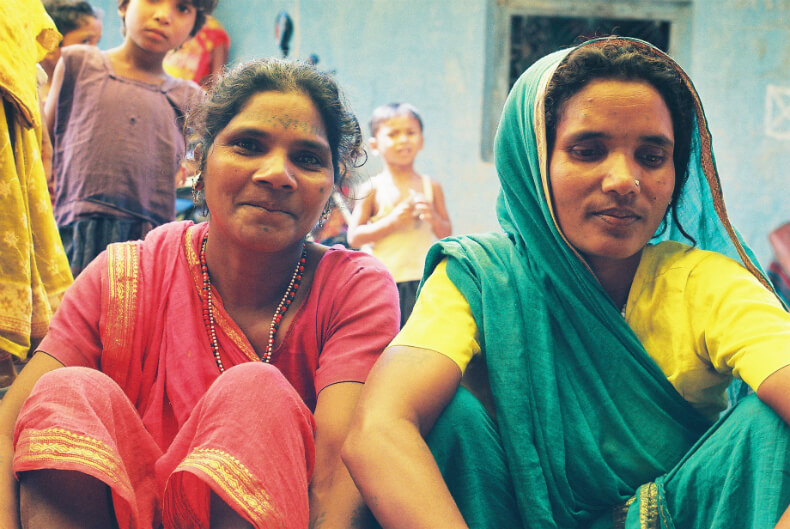 Maki Bai and Sombati Bai from Ajanpur (displaced, now squatting on land in Bhari village, Madhya Pradesh) “All the land that was ours before, where are we going to find that now? We won’t find it. we were the kings of the jungle, but here they treat us like dogs. It’s only sadness here. We can’t even taken wood. Our lives are like dogs!” Photo: Heera Bai

There is no evidence in any of the Baiga villages evicted in the Kanha National Park were given any choice in the relocation, no village was given the option to stay. Even when a rejection is given, this is manipulated; a ‘no’ at the village level gram sabha becomes a ‘yes’ at higher levels of government.

In recent years, the government has run out of state land around Kanha National Park to offer the evicted communities as part of a Resettlement and Rehabilitation package. Villagers from Johar, Benda and the three other villages that were evicted in 2013 received just 10 lakh per adult male, in compensation (women and children under 18 are entitled to nothing). Now, they are struggling to find land that they can afford to buy and the communities have scattered across the region.

In the second park, Achanakmar National Park in Chhattisgarh, there are still 19 tribal villages inside the Core Zone, and many more in the Buffer Zone. So far, five villages have been evicted from the Core, and five more have been given their eviction notice. Those evicted were rehabilitated in resettlement villages on the outskirts of the National Park, where the concrete houses and the dusty road is a far cry from the lush green surroundings they left behind. They were promised five acres of land, a home, a village school and two years of paid work. The fields are drying up after just two harvests, after two years the school building is still awaiting completion and the promised work is yet to materialise. Men of the village are starting to go to distant cities like Lucknow in order to find menial, exploitative daily wage labour. 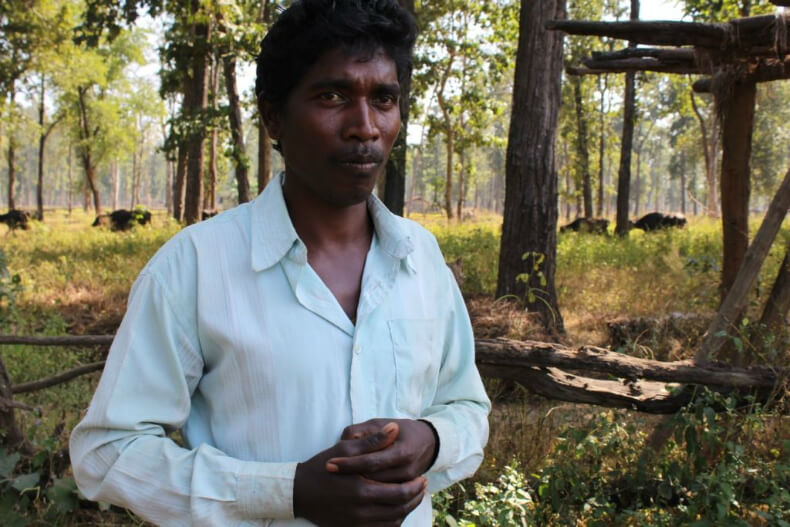 “If we have no choice but to leave Rajak, then we will only be relocated to Jhiriya Behera,” says Ramcharan Baiga. Photo: Heera Bai

Villagers still living in the forest have seen the resettled villages and refuse the offer of relocation. In Rajak, a core zone village, the villagers are unanimous in their rejection of the displaced and the proposed resettlement site. “Of course we want to stay in our village,” Ramcharan Baiga, a residents of Rajak, said. “If we can stay, then we will. We have told the District Collector that we will not go to Bharatpur because the land there is not sufficient to support our families. If we have no choice but to leave Rajak, then we will only be relocated to Jhiriya Behera.” The District Collector is refusing this compromise and insisting that the villagers have no choice in their resettled location.

The National Tiger Conservation Authority (NTCA), Ministry of Environment and Forests, have recently and surreptitiously passed an order stating that:

“In absence (of) guidelines for notification of critical wildlife habitats, no rights shall be conferred in Critical Tiger Habitats which is duly notified under the Wildlife (Protection) Act 1972.”

The Forest Rights Act states explicitly that the rights conferred within apply to all forest areas without exception; therefore the attempt by the NTCA to bypass this is illegal, and will be devastating for the communities affected. There is mounting evidence that suggests that the presence of Adivasis in critical wildlife habitats, including tiger reserves, is in fact conducive to preserving and managing these areas of biodiversity.

In addition to this, there are also plans to create a ‘tiger corridor’ between Kanha and Achanakmar. There are over 700 villages in the proposed area, and many residents do not even hold the most basic land titles. Their evictions will be quick and they will have no grounds to resist. WWF and the state government have assured people that there will be no evictions in the area, but local people do not believe this at all. There are villages about every 7 km in the proposed corridor area, meaning that tigers will not be able to move through the ‘corridor’ without presenting a huge threat to villages. Therefore locals have come to conclusion that the reassurances they have had about there being no evictions are not true.

“That’s what they said when Kanha became a national park, they said the same for Achanakmar. They have already started putting up fences and restricting people’s access to the forest,” said Naresh Bunkar, a local man who was been working with adivasi communities in the region for 30 years. “It’s all lies. Slowly slowly, everyone here is going to be evicted.”

Heera Bai is a freelance journalist who works at Brush & Bow, a platform for creative journalism, working on documenting individual stories through art and music. Follow them at brushandbow.com and on Twitter @brushandbow2