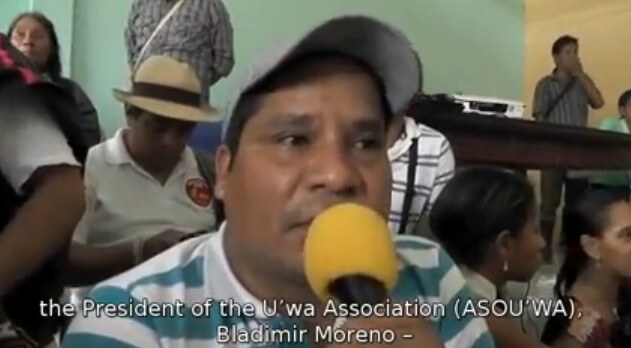 Right now, the U’wa people of Colombia’s cloud forests are once again requesting international support. For over two decades they have fought to keep oil projects – and the inevitable environmental destruction – out of their ancestral territories. With the recent expansion of oil exploration next to their sacred Cubogón river (known as the Magallanes project) and bombing of the oil pipeline that runs through their lands, they are organizing an international advocacy delegation to the United Nations. Using video images taken on Earth Day (April 22nd), they explain why their case urgently requires your attention and support.

The last time Colombian armed forces evicted an U’wa protest, it ended in tragedy. On February 11th, 2000, three indigenous children drowned in the Cubogón River as they fled helicopter-bound National Police. The U’wa were peacefully blocking a road and stopping materials for an oil exploration project, not miles from where they are currently camped out in La China.

This situation is at risk of repeating itself once again. Though the U’wa held high-level talks last Friday with the Colombian government, the Minister of Energy and Mines, Amylkar Acosta, stated this morning in a Caracol Radio interview that the government might declare a State of Emergency given that the shut-down of the Caño Limón pipeline is causing significant economic losses. Some 2.5 million barrels of oil have not been exported since the pipeline was bombed on March 25th, resulting in an estimated $8 million in daily revenue losses for the government.

Minister Acosta is reported to have said that the government can exercise its authority at any moment because they can’t allow the country to be indefinitely harmed “by an intransigent attitude held by part of the [U’wa] community.”

These statement are extremely worrying in light of the weak proposals brought to last Friday’s dialogues by the government (denounced by the U’wa) and the government’s no-show to a follow-up meeting they called for yesterday. If the government is using a carrot and a stick strategy, the carrot is extremely small and the stick is becoming more evident by the day.

A forcible eviction of the U’wa from their encampment at La China would certainly be a horrific event. The U’wa are pacifists by culture – while they are not willing to kill anyone for their beliefs, they are willing to die for them. As such, we can assume a scenario in which many of the hundreds of protesters would be wounded and potentially killed.

Amazon Watch is coordinating with the U’wa and a number of close allies in a campaign to avoid this eventuality. International attention to the case is crucial to send a message to the Colombian government that repression is not an option. Please help us bring U’wa spokespeople to international human rights fora where they can advocate for their land, their culture, and ultimately their survival.