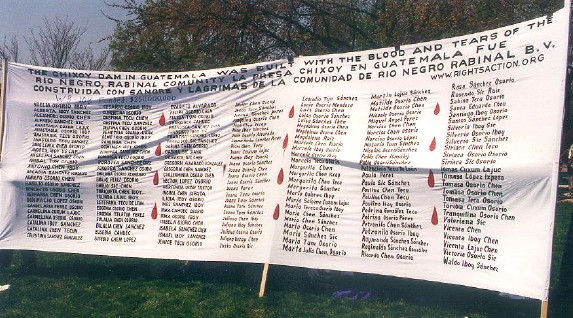 Courtesy of Rights Action, here’s a story discussing a reparations plan for Genocide survivors and Mayan-Achi people who were massacred and forcibly evicted from their communities in the 1970s and 1980s – to make way for the Inter-American Development Bank- and World Bank-funded Chixoy hydro-electric dam.

The Government and communities affected by the construction of the Chixoy Dam have signed an agreement to set up a reparations plan. Diego Paz, representative of the OEA, Rafael Espada, Vice-president, and Juan de Dios García, sign the agreement. The Signatories agree that:

A reparations plan will detail compensation to be provided to communities affected by the construction of the Chixoy Hydroelectric Dam. A recently-signed agreement stipulates that demands of affected families must be met within nine months.

The Government and the COCAICH (Coordinator of Communities Affected by the Chixoy Dam) have signed an agreement which stipulates that a reparations plan must be drawn up to provide details on the extent of damage and destruction caused by the construction of the dam and the reservoir. The INDE (State Electricity Institute) has invested US$150,000 (approximately Q1.1 million) in the investigation and is about to hire a company to carry out the work, according to Rafael Espada.

The Agreement also stipulates that representatives of the OEA (Organization of American States) will act as observers to ensure that parties to the agreement meet their responsibilities. As such, the Government will have to act on the stipulations of the agreement and will have to determine what reparations are owing to affected families.

Juan de Dios García, representing the communities, stated that 28 communities were affected by the construction of the dam. He pointed out that some of the destruction took place in archeological sites, as well as in the departments of Alta Verapaz and Quiché. He also stated that the communities claim that at least 74.5 caballerías of land were flooded by the dam and that, as a result, 5000 families were displaced and now live in extreme poverty.

MEASURES TO BE TAKEN

In September, 2004, some 800 local people staged a protest at the dam to underline the lack of respect for their rights on the part of INDE. In 2006, both parties signed a political agreement which allowed for a one-month period of dialogue to find a solution, with the OEA as observers.

Espada indicated that reparations will also include productive programmes to provide help to the communities in the area. “We should avoid future confrontation, because there will be more dams in the future, so we must arrive at an agreement”, said the Vice-Governor. García backed up Espada’s comment and stated that communities should be informed of development projects.

Construction of the Chixoy Dam and Reservoir was initiated by the Government in 1967, as a way of providing a reliable source of electrical energy.