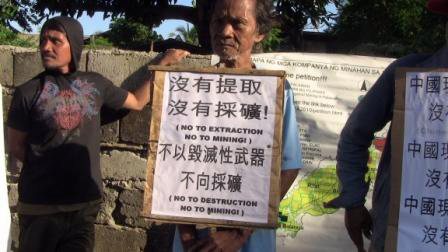 On 10 November, indigenous peoples and farmers led by people’s organizations such as ALDAW gathered in Brooke’s Point city proper to protest against the mining plans of the Jinchuan Group Ltd. (http://www.jnmc.com/default.asp). The company has signed a memorandum of agreement with MacroAsia Corporation for joint investments in Palawan, estimated to reach $1 billion. The agreement was signed during President Benigno Aquino’s recent state visit to China.

“While we are struggling to protect our ancestral domain from mining plundering, Pres. “Noynoy” is signing mining contracts with China. This is all very disappointing and frustrating… in consideration of his previous statements claiming that no more mining enterprises should be allowed to operate in Palawan without the consent of local communities” said a representative of ALDAW.

The 88 million tonnes of nickel ore that MacroAsia Corporation (MAC) aims at extracting lye underground in the middle of the Palawan ancestral domain. The company intends to mine up to 1 million metric tons nickel ore a year from the untouched and magnificent tropical forest of Brooke’s Point Municipality, one of the best biodiversity hot spots in the country. Most of the extracted minerals will be exported to China.

China is the world’s top producer of NPI, a low grade ferro-nickel with high iron content, and relies on imported laterite ores for NPI production. In the first seven months of 2011, the Philippines was China’s second-largest supplier of nickel ore (after Indonesia), used for the production of stainless steel. 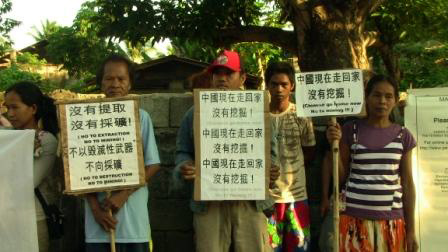 Speaking at the “Kapihan sa Diamond Hotel,” last September, Chamber of Mines president Philip Romualdez revealed that at least four mining contracts involving nickel mining projects in Palawan and Zambales were signed during President Aquino’s recent visit to China. Through these agreements, the Philippine Government is aimed at bringing in $14 billion in investments within the next five years, sacrificing, in turn, the livelihood of thousands of farmers and indigenous peoples.

In late September, MacroAsia vice-president for Mining Operations Ramon Santos made a public statement saying that he was hoping that a NCIP permit would be out by October. However, Indigenous Peoples in Palawan are challenging MacroAsia’s latest attempt to mislead government officials and the public so it can gain access to mineral resources on indigenous ancestral lands.

In reality, October has been a rather challenging month for MacroAsia, due to the massive consultations carried out by farmers and indigenous communities of Brookes’ Point that have clearly shown how the company has no widespread local consensus, as it allegedly claims to have obtained. Moreover, the local Palawan communities are now in the process of preparing an Ancestral Domain Sustainable Development Protection Plan (ADSDPP) as required by the National Commission on Indigenous peoples (NCIP). The ADSDPP will pose a challenge to NCIP endorsing a certificate of precondition (CP) to MacroAsia, because it will clearly demonstrate how the Palawan indigenous people, since time immemorial, have profitably and sustainably managed their forest. As of now, this forest represents a source of livelihood and traditional sustenance for the tribes, as well as an indispensable source of potable water and irrigation for the lowland farmers.

While the ADSDPP process is moving forward, indigenous communities from Brooke’s Point and other municipalities, have come up with a joint resolution directed at the government. Signed on 23 October, the resolution calls for:

At the same time, on 31 October, legal affidavits signed by genuine indigenous representatives of Brooke’s Point Municipality were notarized and filed against both LEBACH and MacroAsia companies.

In addition to the partnership between Jinchuan and MacroAsia, the Oriental Peninsula Resources Group, Inc. (OPRG) has also managed to secure investments for three projects involving hydropower, coal, and nickel off-take with Yun Feng, a Chinese company that owns and controls automotive companies and parts suppliers in China. OPRG is a holding firm which has 94% equity in Citynickel, another mining company which is presently devastating tropical forest in Pulot (Municipality of Espanola) and polluting precious waterways such as the Punang, Malanap and Pulot rivers. The local people complain that the mining road is causing their rice-fields to overflow and be filled with a mixture of sand and silt coming from the mining road.

Citinickel, instead, claims to have signed a Memorandum of Agreement, on June 13 2008, in the City of Puerto Princesa City. Allegedly, such memorandum defines the specific rights and obligations of each party in the mining area, including those of the local indigenous Tagbanua and Palawan communities. The accord was an offshoot of the May 27 decision of the National Commission on Indigenous Peoples to cancel a compliance certificate it earlier gave to Platinum Group Metals Corporation (PGMC) and re-issue a new one to Citinickel. 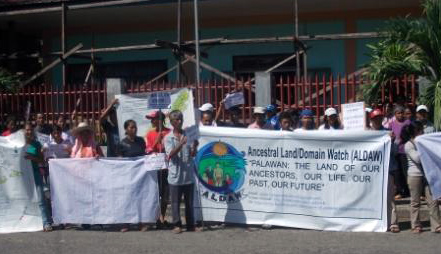 Indigenous advocate groups claim that the re-issuance should have been duly re-validated by the indigenous traditional representatives and by their communities’ members. The latter, instead, – until now – have little or no understanding of the company’s long-term plans.

In the Municipality of Brooke’s Point alone, almost 6,600 hectares of land are now being occupied by three major large-scale companies: Celestial Nickel Mining and Exploration Corporation (CNMEC) – currently being operated by Ipilan Nickel Corporation (INC), MacroAsia Corporation and LEBACH. All these companies have already engaged in exploration work and are waiting for the necessary permits to start full-scale operations.

While local indigenous communities in Palawan are now being faced with huge interests and pressures coming from Chinese companies and investors, YOU can also support the local struggle by:

1) Asking the Jinchuan Group ltd (JNMC) to stop their mining business in Palawan:

2) Address your concerns to NCIP requesting the no-issuance of the Certificate or Preconditions to MacroAsia Corporation:

Please also include in the Cc: oed@pcsd.ph and mearlhilario@yahoo.com (PALAWAN COUNCIL FOR SUSTAINABLE DEVELOPMENT – PCSD)

4) Also sign the no-2-mining-in-palawan petition launched by the Save Palawan Movement no2mininginpalawan.com and the ALDAW Petition to stop the encroachment of mining corporations and oil palm plantations on Palawan ancestral land http://petitiononline.com/PA2010/petition.html