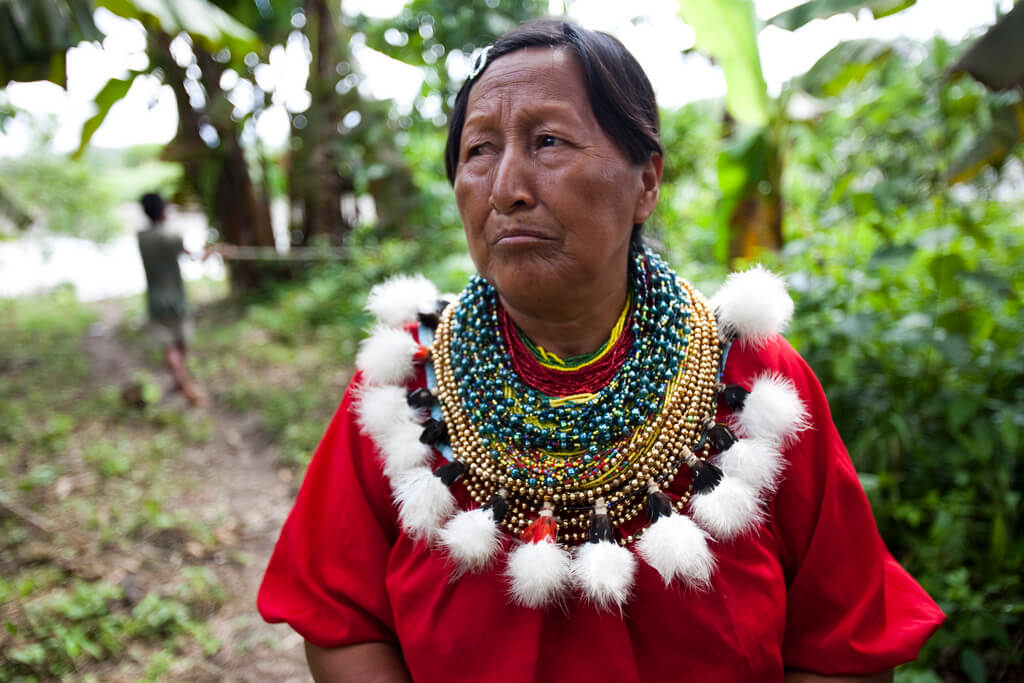 The Cofán, Siona, Secoya, Quichua, and Huaorani have suffered numerous problems from oil production on their lands. Laura Mendo, 59, recalls a time when the Cofan wandered freely and lived off the land. Now the rivers are contaminated, crops don't grow, and new illnesses and cancer have been introduced. Photo by Caroline Bennett / Rainforest Action Network (CC BY-NC 2.0)
Support our journalism. Become a Patron!

After perpetrating what is probably the worst oil-related catastrophe on Earth — a 20-thousand hectare death zone in Ecuador, known as the “Amazon Chernobyl” — Chevron Corporation has spent two decades and a billion dollars trying to avoid responsibility. In 2011, indigenous and peasant villagers won a $9.5-billion compensation judgment in Ecuador. Chevron, despite accepting jurisdiction in Ecuador to avoid a U.S. jury trial, refused to pay. The company sold its assets in Ecuador to avoid seizure, left the country, and threatened the victims with a “lifetime of litigation” if they pursued compensation. The 30,000 plaintiffs, however, have not given up. The case now moves to Canada, where Chevron holds assets, and where the victims hope, at last, to gain justice.

This tragic story reveals almost unthinkable corporate irresponsibility, intimidation, and arrogance, not just by Chevron executives, but by their 60 law firms, 2,000 lawyers and paralegals, six public relations firms, squads of private investigators, thugs and bribed witnesses, and at least one severely compromised U.S. judge. Chevron has probably spent more money trying to weasel out of this case than any corporation in world history.

If we sometimes wonder why significant ecological progress appears so monumentally difficult, this blood-curdling case will give us some clues.

Crimes in the oil patch

In 1964, Texaco (now Chevron) discovered oil in the Ecuadorian Amazon rainforest where the indigenous Cofán, Siona, Secoya, Quichua, and Huaorani people lived traditional lifestyles untouched by industrial civilization. Over the next 28 years, the oil producers perpetrated some of the most horrendous ecological crimes in history.

Texaco/Chevron dumped some 16 billion gallons of wastewater laced with carcinogens into rivers and streams. The company abandoned hundreds of toxic waste pits in the rainforest — containing toxic oil sludge, in violation of basic industry standards. The indigenous inhabitants were left with poisoned land, food supply, and drinking water. The region’s river sediment remains contaminated with heavy metals and chemical toxins.

Chevron’s own environmental audits (by Fugro-McClelland) confirm these crimes and show that the company never conducted basic monitoring of its pipelines and never developed a plan to clean up its routine oil spills. Records reveal, for example, 38 pipeline ruptures in a single month, September 1978, in a single oil field.

In 1972, to hide the crimes, a Texaco/Chevron executive in Ecuador ordered that “only major [environmental] events . . . are to be reported.” It defined a “major event” as one that might “attract the attention of the press and/or regulatory authorities.” The policy stated that “no reports are to be kept … and all previous reports are to be removed … and destroyed.” Evidence showed that Chevron never approved a budget for environmental clean-up in Ecuador.

Each of the 54 judicial site inspections during the trial in Ecuador found that Chevron left oil contamination in violation of national legal standards that are ten times more lax than typical U.S. standards. Some Chevron pits showed contamination 900-times higher than the Ecuadorian standard, and the average pit contained 20-times the allowable Ecuadorean contamination (200-times the U.S. standard). 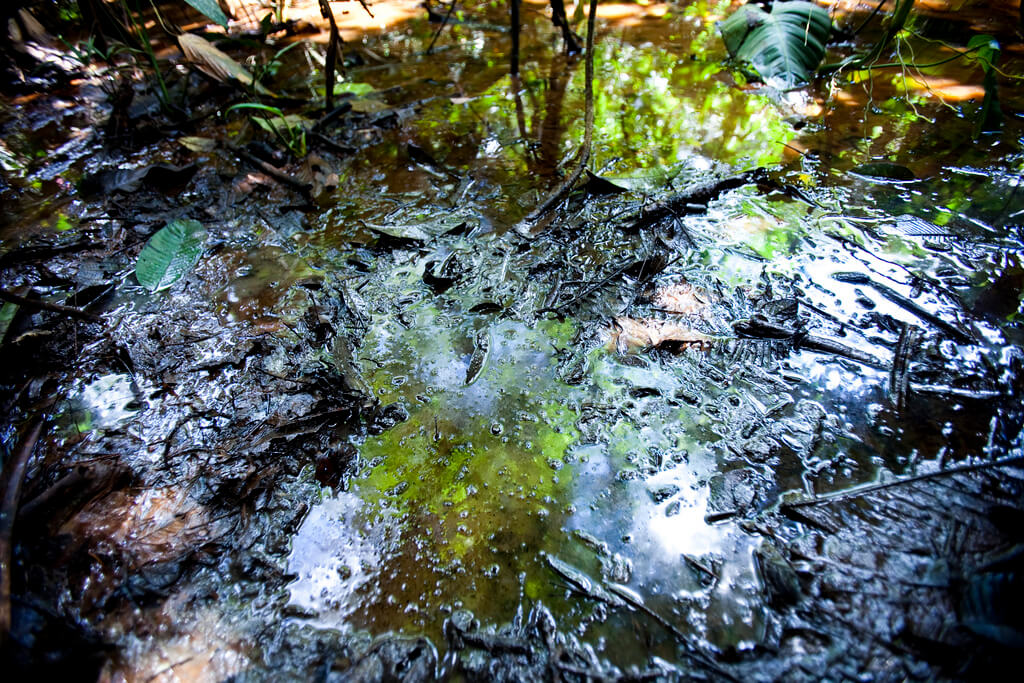 Crude contaminates an open toxic pool in the the Ecuadorean Amazon rainforest near Lago Agrio. It was abandoned by Texaco (now Chevron) after oil drilling operations ended in 1990 and was never remediated. Photo by Caroline Bennett / Rainforest Action Network (CC BY-NC 2.0)

Rainforest inhabitants testified that Chevron’s waste pits overflowed into streams, that local drinking water became noxious, that family members became ill, and that some died from exposure to the toxins. The contamination contained human carcinogens and toxins including benzene, toluene, ethylbenzene, xylene, polycyclic aromatic hydrocarbons (PAHs), and benz[a]anthracene. Samples revealed illegal levels of barium, cadmium, copper, mercury, lead, and other metals that damage the immune, nervous and reproductive systems and cause cancer.

Chevron’s own documents reveal that the company adopted these practices to save money. By conducting its Ecuador operation in ways that were illegal in the US, and around the world, Texaco saved an estimated $3/barrel of oil, approximately $5 billion over 20 years. During that time, the company made profits of about $25 billion. 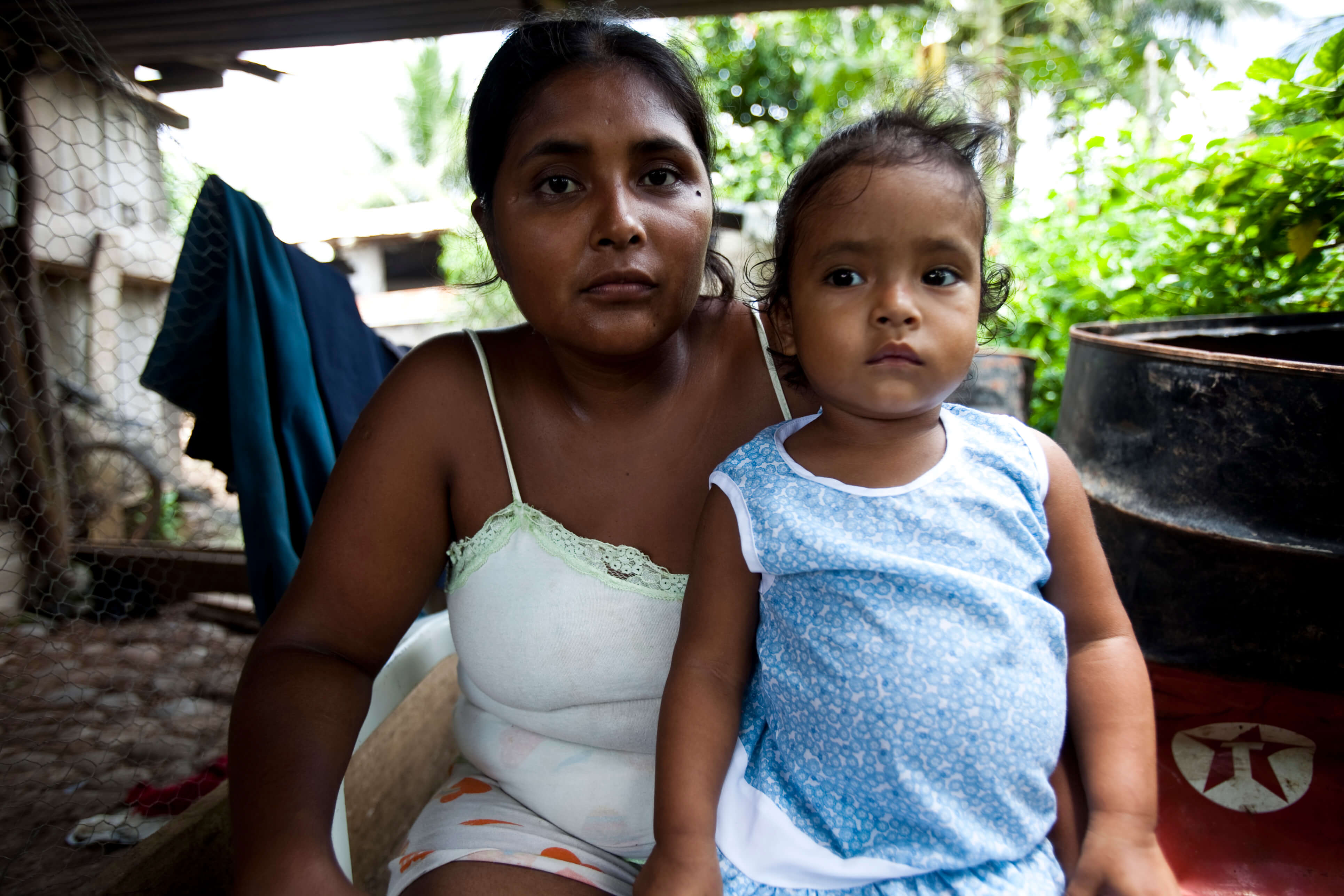 Ines Suarez, 33, and her daughter Angie Christina Castillo Suarez, 2, outside their home near the Sacha 18 (remediated pit, near well #30, and PetroEcuador has operated since) in the 30 de Mayo sector of San Carlos. The family drank contaminated water for years and Angie suffers severe health problems. Photo by Caroline Bennett / Rainforest Action Network

In 2001, Chevron bought Texaco and succeeded in shifting the case to Ecuador where the company accepted jurisdiction and probably believed it could influence the court with a politically-engineered dismissal of the case. When the trial finally commenced in 2003, Chevron’s top executive in Ecuador met with the Ecuador Justice Minister and asked him to dismiss the case. That effort failed.

The evidence clearly stood against Chevron: The open toxic pits, the 16 billion gallons of contaminated drilling waste, the poisoned rivers, the company’s own records, and the reports from its environmental consultants.

Witnesses testified about a culture of disdain for the indigenous inhabitants and how the company remained unresponsive and openly hostile to grievances from the local people. The court heard how Texaco oil workers committed acts of sexual violence, ridiculed indigenous people for customs and dress, and told inhabitants that oil run-off was full of vitamins, similar to milk. 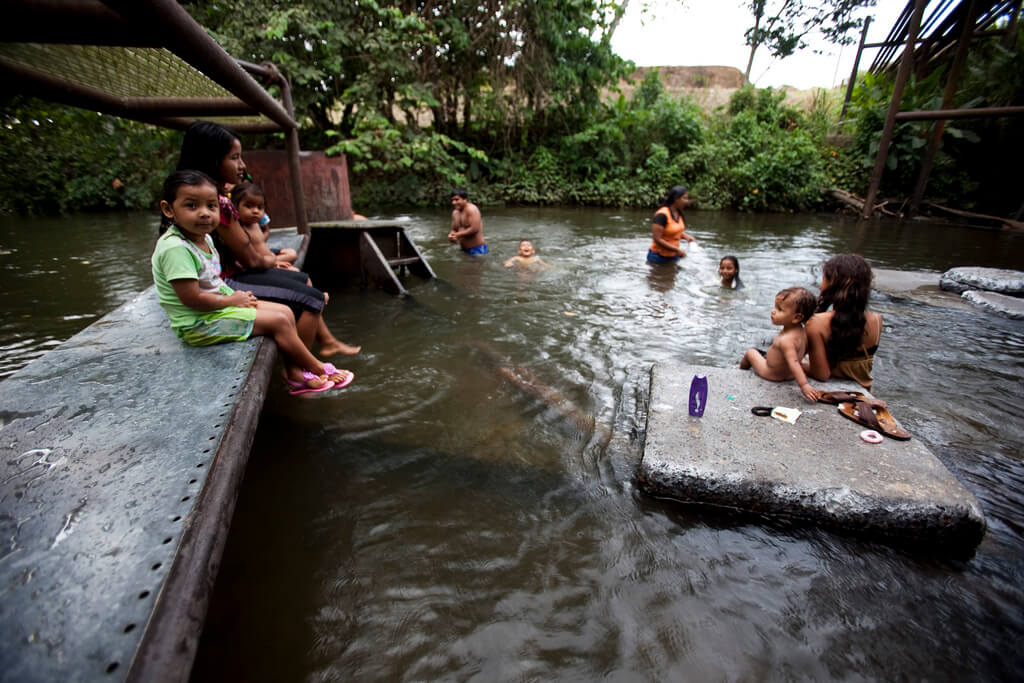 Residents still bathe and wash clothes in a river they claim was contaminated by Texaco (now Chevron) near San Carlos, Ecuador. The community in the Amazon rainforest is reportedly suffering from some of the highest cancer rates in all of Ecuador. Photo by Caroline Bennett / Rainforest Action Network (CC BY-NC 2.0)

Secoya leader Ricardo Piaguaje, testified how Texaco “drilled wells and set off dynamite next to our people’s houses” and how “oil spills and petroleum waste products” contaminated their home. The court heard how contamination had reduced fish and game stocks, such that subsistence hunting communities could not survive. Those who did endure experienced a catastrophic public health crisis, loss of food sources, and poverty.

In 2007, the Montana Supreme Court assessed a $9.9 million fine against Gibson Dunn for “maliciously trying to intimidate” its adversary with “legal thuggery.” A New York federal judge sanctioned the firm for making “deceptive” statements, hiding documents, and for other “unacceptable shenanigans.”

In 2005, a California federal court sanctioned Gibson Dunn for tampering with a witness, noting that the firm’s “culture promoted obstruction, gamesmanship, and flagrant disregard of this Court’s orders.” A California state court ordered Gibson Dunn’s clients to compensate a documentary filmmaker and a human rights lawyer for illegitimate SLAPP lawsuits designed to silence criticism.

In Ecuador, Gibson Dunn lawyers threatened judges with jail if they ruled against Chevron, but their dirty tricks campaign failed. Ecuadorean judges rebuked Chevron’s lawyers for their tactics, and in 2011 issued the $9.5-billion judgment against Chevron for two decades of ecological and civil rights abuses. Eight appellate judges, including Ecuador’s highest court, upheld the verdict. Chevron refused to pay and then sold or removed its assets from Ecuador to avoid collection by the victims.

US and Canadian courts

Meanwhile, the Gibson Dunn “rescue squad” filed “racketeering” charges in the U.S. against the Ecuadorean villagers and their lawyers, claiming they used “fraud” to gain victory in Ecuador, clearly a SLAPP lawsuit designed to obstruct the villagers from collecting payment in the U.S.

Chevron’s claim relied heavily on the testimony of a disgraced former Ecuadorean judge, Alberto Guerra, who admitted openly under oath in a subsequent case that he had accepted bribes as a judge before being removed from the bench. Chevron helped Guerra flee to the U.S. and has paid him roughly $2 million for his cooperation.

After extensively rehearsing his testimony with a Gibson Dunn legal team headed by lawyer Randy Mastro, Guerra claimed in U.S. federal court that lawyers for the plaintiffs wrote the Ecuador judgment and gave it to the trial judge on a flash drive. This ruse appeared similar to a 2015 case, in which the High Court of England sanctioned Gibson Dunn for fabricating evidence to frame the political opponent of a client, the President of Djibouti. 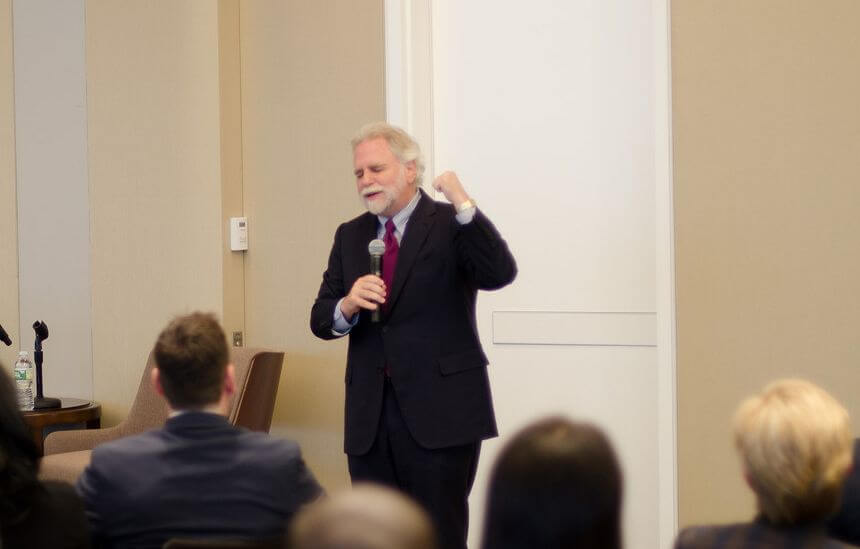 In the US, however, the Chevron scheme worked. U.S. District Judge Lewis A. Kaplan, a notorious pro-business judge, displayed relentless bias against the Ecuadorean victims and their lawyers, refused to sit a jury, insisted on ruling by himself, accepted the testimony of Guerra — even after his deceits had been exposed — and ruled in favor of Chevron’s claim.

Guerra later admitted under oath to repeatedly lying about having been offered a $300,000 bribe by the lawyers of the Ecuadorian victims. A forensic analysis by one of the world’s leading computer experts debunked Guerra’s story by showing that the Ecuador trial judge had written the judgement, without interference, on his office computer over several months.

Judge Kaplan’s decision almost certainly violated U.S. law and the international comity principle that courts of one country respect the judgments of foreign courts. An earlier attempt by Kaplan to block the Ecuador judgment was overturned for violating this principle. The U.S. appellate court that supervised Kaplan shockingly refused to review his acceptance of Guerra’s lies and the U.S. Supreme Court declined review.

Chevron, however, cannot use a U.S. court to block enforcement of a foreign judgment in Canada or in any other country. The victims’ lawyers are now moving the case to Canada for collection. Enforcing foreign judgments against those who refuse to pay is considered routine internationally, and Canada has domestic laws governing this practice. Canada’s Supreme Court – unlike the U.S. court – already has backed universal legal principles by unanimously rejecting another Chevron attempt to deny jurisdiction to the Ecuadorians. An Ontario trial court will soon commence a trial to enforce the judgment.

Chevron has already begun a campaign of intimidation against Canadian politicians and judges, mocking Canadian courts for accepting the case, and calling it a “crock” and a “waste of time and money.” Chevron claims the Ecuadorians cannot collect in Canada because its assets are held by a wholly-owned Chevron subsidiary – a subterfuge that, if accepted, would offer corporations impunity for environmental crimes the world over.

Chevron holds some $15 billion in Canadian assets and takes about $3 billion in annual profits from Canadian operations in the Beaufort Sea, Newfoundland, and the Alberta Tar Sands. The company, however, has started dumping Canadian assets. In April 2017, Chevron sold a refinery in British Columbia, and has sold 213 Canadian fuel stations. The plaintiffs may find it necessary to ask Canadian courts to freeze Chevron assets, before they dump them all to avoid payment, as they did in Ecuador.

The International Human Rights Program at the University of Toronto Faculty of Law has filed a “friend of the court” brief supporting the villagers’ rights to pursue Chevron’s assets in Canada. Lawyers for the indigenous and peasant villagers of Ecuador have not been intimidated by 24 years of attacks and dirty tricks by Chevron and its agents. They vow to endure until they collect compensation for the victims and the cost of restoring the Amazon rainforest.