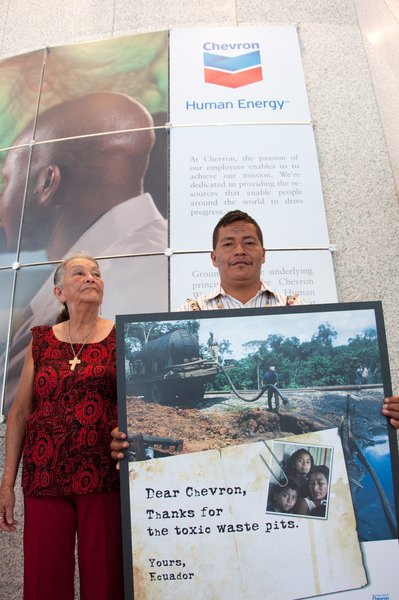 "Dear Chevron, Thanks for the toxic waste pits. Yours, Ecuador." Photo AmazonWatch.org
Support our journalism. Become a Patron!

In what may prove to be one of the most bizarre legal moves ever, lawyers for the oil giant, Chevron, asked an Ecuadorian court to dismiss a multi-billion dollar lawsuit on the grounds that the plaintiffs don’t actually exist. Just who is it that Chevron’s legal team wants to make ‘disappear’ like some rabbit from a top hat? Indigenous tribal members from Ecuador, that’s who.

I originally covered this storyline for the news outlet, “Native American Times” in July of 2007 and I was appalled then at the horrors being faced by these ‘invisible’ plaintiffs. To read this past week that this case is still unresolved and that the people in this region continue to live without clean water or access and payment for medical care made my blood boil. Now they are told that they ‘don’t exist!’

The case against Chevron has been on trial since 2003 and now, nearing a final judgment that could see damages of $113 billion levied against them, the legal-beagles are howling and snapping at any opportunity to rescue the oil giant.

From 1964 to 1990, Texaco, which was later bought out by Chevron, operated massive oil drilling operations in the remote Amazon rainforest regions of Ecuador. Between 1971 and 1992, more than 1.5 billion barrels of oil was extracted from this area. Chevron has been unable to make Texaco’s toxic mess disappear through magic or other means and may now be left holding the bag for a disaster of epic proportions.

How big is the disaster you ask?

Some experts consider this to be the worst oil-related disaster in history with toxic waste covering a region the size of Rhode Island. Billions of gallons of toxic waste were dumped into the rainforest area. Cancer rates, the highest in the region where Texaco operated its drilling operations, are blamed for hundreds of lives lost and contributing to the complete extinction of one indigenous group and the endangerment of two others.

Now, Chevron’s legal team has resorted to magic tricks beyond any scope of the imagination by stating that the lawsuit should be dismissed because the plaintiffs don’t really exist.

Well, maybe that is because you killed off a bunch of them! I mean, one tribe is now completely extinct so I am quite sure that you could manage to say that they don’t exist but what about the remaining plaintiffs? If Chevrons’ lawyers have their way, the delays and magic tricks may delay the final judgment long enough for the rest of the plaintiffs to die off too

Early scientific reports revealed that some water samples from this region contained toxic chemical levels thousands of times higher than permitted by Ecuadorian and U.S. environmental laws. Chemical agents like benzene, toluene and xylene are just some of the more glamorous waste by-products from petroleum operations and are known cancer causing agents.

Gee, I always like to have a little benzene in my morning coffee don’t you?

Ah yes, the fresh taste of a xylene cocktail after a long days work is quite refreshing indeed!

The list of plaintiffs that Chevron-the-Magician wants vanished before your eyes includes five indigenous groups- the Quechua, Siona, Cofan, Secoya and Huaorani. Approximately 80 communities allege that Texaco dumped more than 18 billion gallons of toxic wastewater into Ecuador’s rainforest during its operations. Documented cases of cancer, skin disease, reproductive abnormalities, and nerve damage are just a few of the benefits from drinking your morning chemical-cocktail if you live near these types of dump sites.

YUMMY! Pour me another glass of that for sure!

This case is hardly rare. Sadly, it seems most of modern society dabbles in such magic-self-deception. Like an ostrich surrounded by a pack of snarling dogs waiting to devour it whole, entire societies blindly believe that all is well in the world because their heads are buried deeply in sand.

Perhaps a cup of benzene would cure that.

We believe that all is well in the world and that our water, air and food supplies are safe because we want to believe it. We hold onto some warm and fuzzy commercial marketing ploy following such things as the BP Oil spill with hope and endearment to these mega-monster-corporations because we have been trained to for decades. All the while the deception continues and we lap it up like kittens for a bowl of warm milk.

The very real plaintiffs in the Ecuador case are still living with poisoned water and land this long after the realities of their plight became public. The old ‘out of sight, out of mind’ magic trick is still alive and well it seems. Until, that is, this scenario plays out in your own back yard.

According to an LA Times financial article, Chevron posted a net income of $5.4 billion for the second quarter of 2010.

I wonder how much of that will be left after their attorney fees? Enough to send a few cases of designer-label bottled waters over to Ecuador?

I hear that the cost for magicians that can make entire Indigenous tribes ‘disappear’ runs quite high these days.

original article by this author is at:
http://amazonwatch.org/news/2007/0611-spotlight-on-environmental-catastrophe-effecting-indigenous-people-in-ecuador-illuminated-by-celebrity-visit