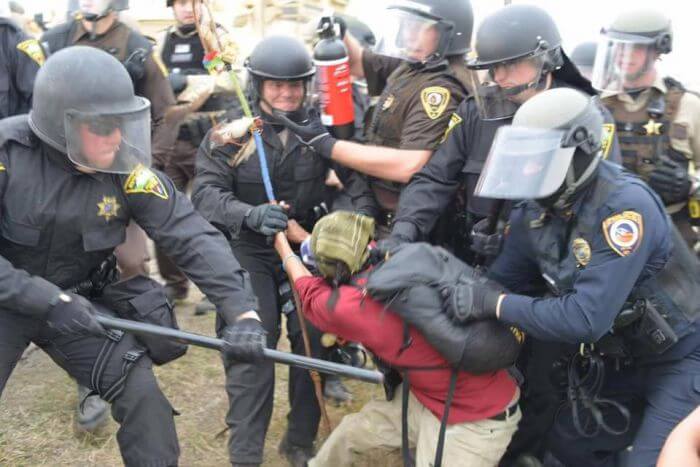 “We were channelling our ancestors today, our warrior spirits”

Land defenders standing their ground to block construction of the Dakota Access Pipeline had militarized colonial police come down on them in force yesterday, Wednesday October 27. The Indigenous-led resistance has had its strength tested several times now and held up. Meanwhile, most elected officials stay silent as this fossil fuel corporation bulldozes through Indigenous lands and over long-standing treaty rights.

I caught up with Dawn, an Indigenous front-line media supporter in the thick of the action, after the showdown yesterday, which Dawn estimates lasted seven hours. Dawn has been embedded in the camps, watching the resistance, the pipeline company, and the American police forces.

I’ll just get right to it: where were you today and why were you there?

Last night we heard there could a raid at the 1806 highway camp. I stayed awake until 5 a.m., because usually that’s when raids happen, pre-dawn. Then I woke up at 11 a.m., had some coffee and heard the police were on their way. 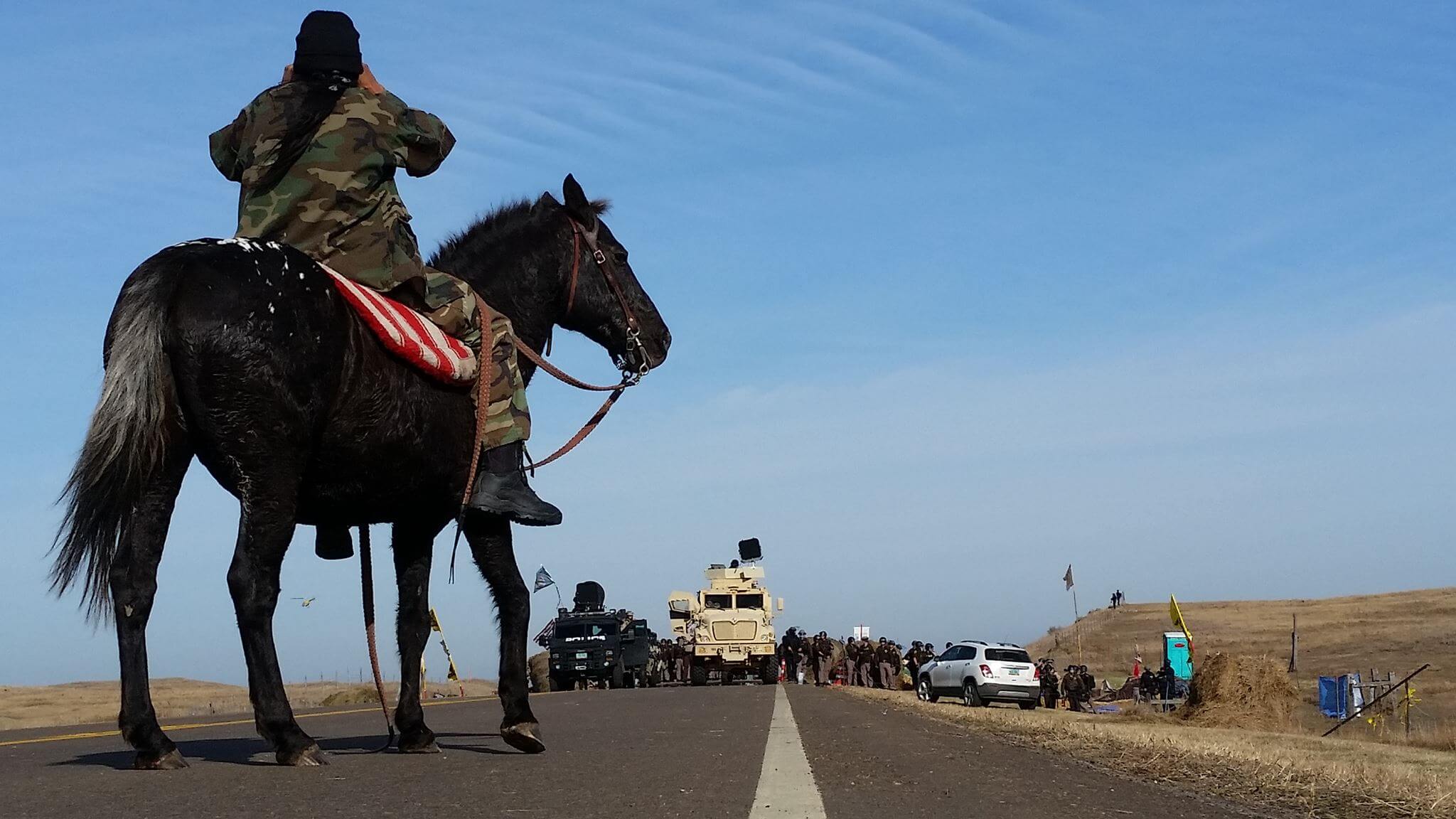 I was there at 1806 camping since 4 days ago (or 3?) when the people were summoned at 5:30 a.m. for a prayer ceremony and march to the pipeline corridor where across the road the September 3rd dog attacks happened.

Right there [after September 3rd], the first teepees went up, and a hundred people set up camp. 1806 runs north-south, and the pipeline corridor runs across it, almost east-west.

There had already been people camping at the site, but they were camped in the ditch, whereas 3 or 4 days ago, the people decided to cross the fence, onto the ranch that DAPL bought.

Sacred Ground Camp was established the eve of the dog attacks, and they have been trying to rally up more bodies to help them hold the line. So 3-4 days ago their request was answered.

Soon after people moved camp to 1806, the Morton country sheriff’s office also set up a camp, north of us at Fort Rice. So they’ve been planning to raid.

The police came in this afternoon, and there’s video of them forming a line across the highway. What was going on then, and what was the strategy with the fire on the road?

People were using anything to keep the police away, they were using cars, tires, wood. Some people were sitting in a circle on the ground praying, others were quite vocal and up at the frontline. 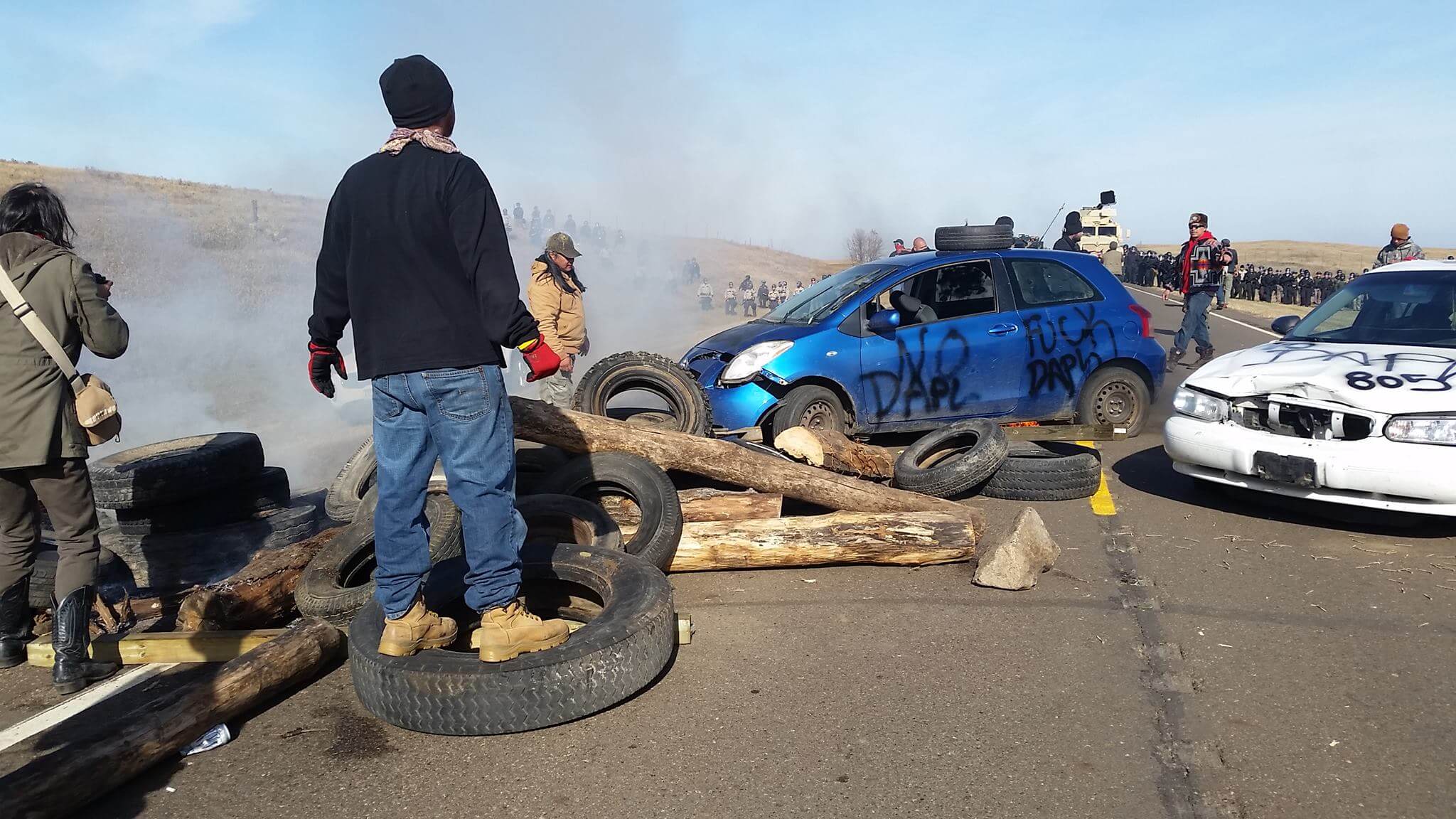 The one who called upon people to march and move camp to 1806, located north of the main camp, kept stressing that people abide by police orders to move back, but it’s hard to control a crowd, being one person, and also everyone wanted to stand their ground and stay planted at the 1806 camp.

With hundreds of people around, you are going to get hundreds of different ways of doing things and the people were trying their best today no matter how chaotic it was, we were channelling our ancestors today, our warrior spirits.

It was a short notice, and it’s hard to move as one unit, but today we were united.
There were two blockade site today, yes? Did you see both?

I went to both sites. 1806 first, then by radio they were calling for media support at the bridge blockade on road 134. Then I went back to 1806.

What did you see when police came at the land defenders on Highway 1806?

The police line kept inching their way southward to get us off the pipeline corridor. I seen a horse shot with rubber bullets and its human getting tasered. A circle of praying elders got kettled by the police line and arrested. Witnessed a herd of buffalo running over the hills towards the police line, with the horse nation directing them from behind, until the helicopter flew low, scaring them into another direction. ATVs on a high-speed chase with these same youth on horseback, who all luckily got away, but one had their horse shot at. An agent provocateur, posing as one of the people, but working for #DAPL, nearly plowed people off the road with his white truck before jumping out and pointing his rifle at the unarmed crowd. Then vigilante justice was served, they set his white truck on fire at junction 134. A second DAPL worker’s vehicle was seized and also set on fire. The Bureau of Indian Affairs police saw it all and hauled the agent provocateur away. We also saw smoke and flames coming from where DAPL drills and equipment are stored on top a hill at Cannon Ball Ranch. I am okay, and only felt the sting of pepper spray on my back neck. Almost got snatched away at one point, and leaped away like a deer from jumping from log to log. 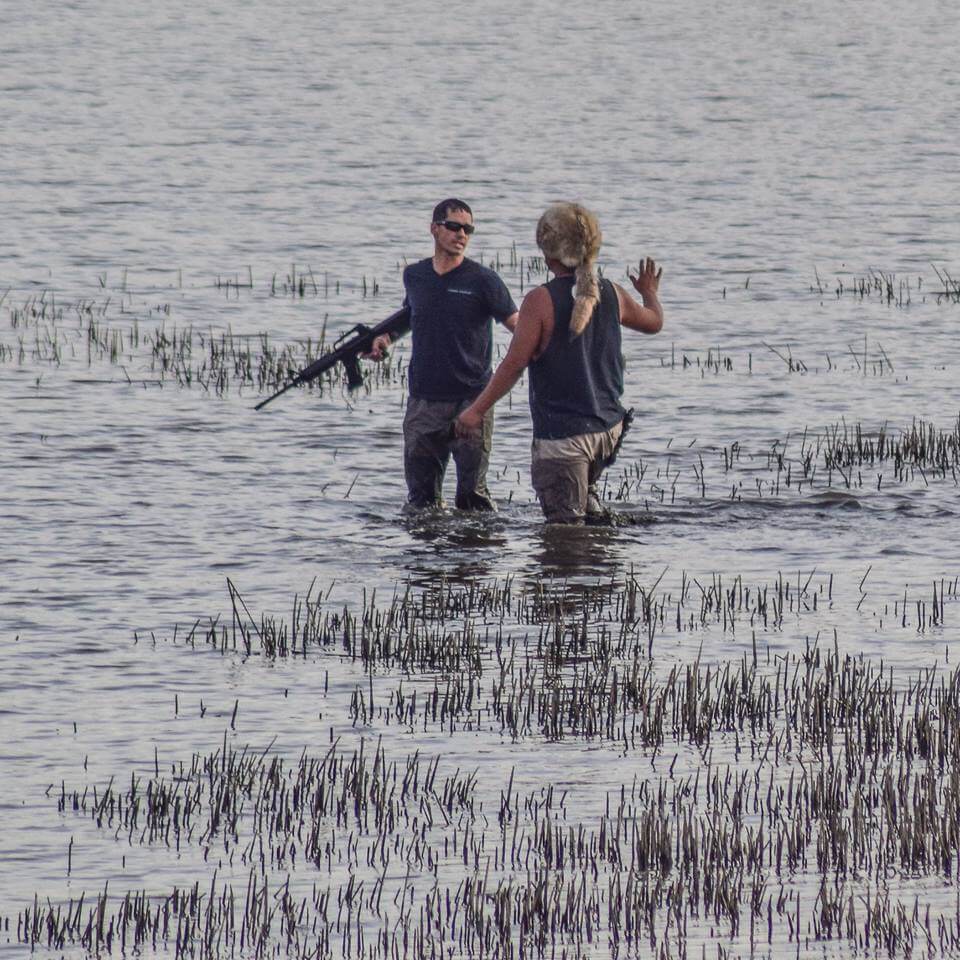 The 1806 camp is lost, but the people will regroup.

What did it feel like to be there on the ground watching this?

Today I felt no fear, we have 500+ years of genocide, and I sense we were protected by our ancestors, we were channelling them today.

Looking forward, what do you see?

I hope that people see what’s happening and come to Standing Rock, we need more water protectors, we need them to come back.

This article originally appeared at The Media Co-op. It has been re-published at IC under a Creative Commons License.