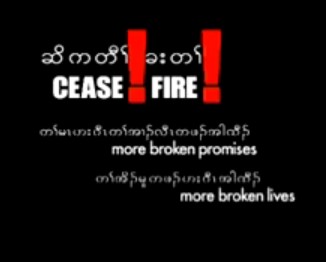 We want the fighting to stop. We want the fear to end. We want our lives Back. We want self-determination and we want peace.

Cease! Fire! is a heart-wrenching and yet inspiring documentary film about the Indigenous Karen People of eastern Burma, and their continued struggle for peace and freedom on the land they know as “Kawthoolei,” which means, “the land of peace.”

For the past 55 years, ever since Burma’s military overthrew the civilian government, the Karen have known little more than terror and oppression.

However, there is a deep-seeded hope among the Karen that, as tragic and painful as things have been, one day they will again know peace.

To that end, in 2004 a group of Karen leaders attempted to form a ceasefire agreement with the current military regime. Though the agreement was signed, the regime took advantage of the ceasefire to oppress the Karen and encroach on their lands even further.

Produced by the indigenous Karen film group, Kaw lah films, Cease! Fire! examines the events surrounding the agreement, from the perspective of Karen themselves.