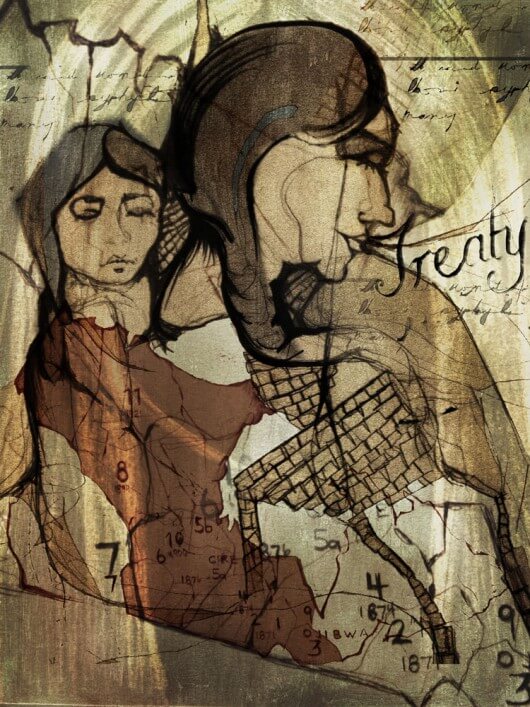 Lynn Gehl
This article was originally published at Briarpatch Magazine.

When I think about the reasons Indigenous people live in Third World conditions in a First World country and wrestle with how best to explain what I have come to know to the average Canadian, I draw on first-hand knowledge of the history of Indian status registration and entitlement provisions within the Indian Act, as well as Indigenous women’s attempts to eliminate sex discrimination resulting from the act. My own section 15 charter challenge regarding the continued sex discrimination in the Indian Act was recently heard in the Ontario Superior Court of Justice.

I also draw on first-hand knowledge from the current Algonquin land claims and self-government process and the many Indigenous attempts to have our jurisdiction respected. Many Canadians don’t understand the difference between a treaty process and the land claims process.

In these treaties, Indigenous people allowed settlers to reside on and benefit from our land and waters. These treaties established peace and friendship, and determined that the land and resources were to be shared equally and respectfully between Indigenous, British, and French people. They also established a framework for all future treaty relationships.

The initial criteria for Indian-ness, and thus for who was entitled to Indigenous treaty rights, followed an Indigenous model: all people who resided with the Indians were included. But the government of Canada began limiting the number of people entitled to Indian status through its enfranchisement process. Enfranchisement sounds positive to most Canadians, but it was the name for the process of stripping Indigenous people of their treaty rights and conferring Canadian citizenship on them. It was a state mechanism of assimilation and genocide.

Many Indigenous women, like Sharon McIvor and I, have worked to eliminate this sex discrimination. In 1966, Mary Two-Axe Earley began to speak publicly on the issue, and in 1971 Jeannette Corbiere Lavell took the matter to court, arguing that it violated the Canadian Bill of Rights. Yvonne Bédard joined Corbiere Lavell’s effort in 1973 when their cases were heard together at the Supreme Court of Canada (SCC). In rendering its decision the SCC compared Indian women to Canadian women and ruled they had equality with them and that as such there was no sex discrimination. Through this line of reasoning the rights of Indigenous women were denied. In 1981, Sandra Lovelace made an appeal to a UN Human Rights Committee on the issue, but because her loss of status registration occurred before the International Covenant on Civil and Political Rights (ICCPR) was in force in Canada, the committee declined to rule on the issue. They did, however, rule that the Indian Act violated article 27 of the ICCPR, which protects culture, religion, and language.

Canada’s settler version of the Constitution was patriated in 1982 and it included the Canadian Charter of Rights and Freedoms, where section 15 guarantees the right to live free from sex discrimination. The Indian Act was amended in 1985, purportedly to bring it in line with the charter. Nonetheless, through Canada’s invention and imposition of the second-generation cut off rule, the grandchildren of Indian women enfranchised for marrying-out continued to be denied status registration and consequently their treaty rights. The cut off rule references the fact that after two generations of parenting with non-Indian partners (as defined by the Indian Act), status registration is no longer passed on. The descendants of enfranchised women were hit one generation earlier with this rule than were men’s descendants. In this way, sex discrimination against Indian women was deceptively passed on to their children and grandchildren.

Because Sharon McIvor’s status entitlement moved through her mother’s line rather than her father’s, she was prevented from passing on full status registration to her son. She worked for 25 years to bring this issue through Canada’s court system, yet they only offered her son and his children a lesser form of Indian status. For others, Indian Act stipulations mean that grandchildren born before September 4, 1951 as well as children born through common-law relationships continue to be denied status and, consequently, their treaty rights.

Meanwhile, when a father or a grandfather is unstated or unknown, the children and grandchildren of Indigenous women may be denied status. This form of sex discrimination was actually introduced through the 1985 amendment to the Indian Act. While there were previous provisions that protected children born outside of marriage or of unstated or unknown paternity, the current Indian Act is silent on the matter.

To address this crafted legislative silence, Aboriginal Affairs and Northern Development Canada (AANDC, formerly Indian and Northern Affairs Canada) developed an internal policy for unstated paternity. Under the policy, when a child is born to a status Indian mother and for some reason the father’s signature is not on the child’s birth certificate, AANDC simply assumes the father is non-Indian.

What is more, Canada’s unstated paternity policy also applies in situations such as incest and rape, and we know that Indian women face a higher risk of sexual violence. In this way, Canada actually capitalizes on sexual violence against Indigenous women.

It should be obvious that Canada is not interested in living up to the Charter of Rights and Freedoms. Rather, Canada and its team of policy- and law-makers are more interested in creating new forms of sex discrimination as a means of assimilation.

After a 28-year personal struggle, my section 15 charter challenge regarding sex discrimination in the Indian Act was heard in the Ontario Superior Court of Justice in Toronto last October and we are awaiting the judge’s decision.

From treaties to land claims

An Indigenous understanding of Canada’s constitutional beginnings is based on a federal treaty order in which Indigenous nations retained jurisdiction of their land and resources (as opposed to the latter-day provincial order). This Indigenous understanding of Canada’s Constitution was recorded in the three wampum belts that were exchanged during the 1764 Treaty of Niagara. Many Canadians don’t know that the foundations of Canada rest on a treaty process or that the treaty process was supposed to be about mutual benefit and the sharing of land and resources between Indigenous people and settlers. Further, many Canadians have never had a chance to learn about how the treaty process has changed or – more accurately – slithered over time. Others, who know a little more, might wonder if the modern day treaty process has actually improved. After all, Aboriginal rights are enshrined in section 35 of the patriated Constitution.

At the time of the Peace and Friendship treaties, Indigenous people were more populous and healthier than the European settlers, and as such, treaty-making followed an Indigenous model. Treaties were about alliance: the goal was to share land and resources.

After the French ceded land they did not own to the British, and after the population ratio shifted due to disease and immigration, Europeans imposed a model of treaty-making that was first and foremost about land acquisition rather than sharing. Land purchases in Ontario accommodated British Loyalists and newcomers to the land. During this time, no provisions for reserves were established.

According to colonial rule and the written text of the agreements – rather than what Indigenous people know through oral tradition – the 1850 Robinson treaties that took place around the top of Lake Huron involved Indigenous nations ceding, or giving up, their land and land-related rights except for reserve land. These treaties also established provisions for annuities (rather than the one-time payouts common today), as well as hunting and fishing rights. As Europeans spread westward, the numbered treaties, made from 1871 through 1921, required Indigenous nations to extinguish all of their land and land-related rights; later, a meagre amount of rights were granted back. These treaties also established provisions for reserves, annuities, and hunting and fishing rights. With the 1923 Williams Treaties, made in what is now southern Ontario, the European model of treaty-making continued to dispossess Indigenous nations. Here again, according to colonial law, Indigenous nations extinguished all of their land and land-related rights. Even worse, in return they received only mission settlement reserves and lost all of their hunting and fishing rights while merely receiving a one-time payment and thus no annuities.

Despite the longtime efforts of the Nisga’a Nation and Frank Calder in what is now British Columbia to have the treaty process respect Indigenous jurisdiction, after the 1973 Calder court decision the federal government still proceeded to unilaterally, rather than collaboratively, draft their Comprehensive Land Claims Policy. With this colonial policy firmly in place, Indigenous nations were once again required to extinguish all of their land and land-related rights. Many referred to this approach as the “blanket extinguishment” policy. It greatly outraged Indigenous people, and rightly so.

The shift in federal policy from calling for our rights to be extinguished to calling for our land rights to be relinquished is seen by many – myself included – as a pitiful reform. At the practical level, there is no difference between “extinguishing,” “relinquishing,” and “defining your rights completely.” They all lead to the same outcome. As a result, many people liken the modern-day processes to those of private real estate transactions in line with the European model of treaty-making, where the only right Indigenous people have is the right to surrender land and resources.

In sum, just as the government of Canada manipulated the legislative amendment process regarding sex discrimination and Indian status, it has also manipulated the treaty process and land claims process to dispossess Indigenous people.

The government of Canada has strategically confounded the opportunity for real change by shifting its discourse in order to achieve the same old goals. In this way, Indigenous people’s calls for equality and for the recognition of our treaty rights have become little more than a chance for Canada to learn how to refine its tools of dispossession.

Political scientist Christopher Alcantara refers to this as “instrumental learning,” since Canada has learned solely for the purpose of advancing its own interests, but I think a more appropriate term would be “manipulative learning.” Canada continues to develop evermore deceptive ways to deny the rights of Indigenous nations while presenting these changes to Canadians as if they were progressive reforms.

Lynn Gehl, PhD, is an Algonquin Anishinaabe-kwe from the Ottawa River Valley. She has undertaken a section 15 charter challenge regarding the continued sex discrimination in the Indian Act and is a critic of the Ontario Algonquin land claims and self-government process. Her latest book is The Truth that Wampum Tells: My Debwewin on the Algonquin Land Claims Process.