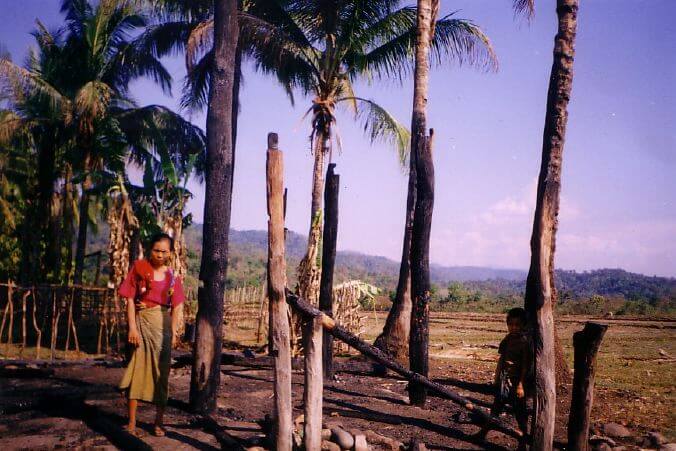 Burma: In the Name of Development

The enslavement, torture, displacement, and genocide of people in Burma continues

From the Asia Tribune: According to the Free Burma Rangers, a relief organisation working in the area, soldiers from Light Infantry Battalions 542 and 544 attacked Ber Ka Lay Ko village, northern Toungoo District in north-western Karen State on 12 May. They reportedly captured, raped and killed a woman.

Christian Solidarity Worldwide revealed in a statement, “Three days later, troops attacked again as villagers worked in their fields. Many were able to flee due to the noise made by the Burma Army, but one man, Saw Hsar Mee, aged 55, was deaf and was unable to hear the attacking troops. He was shot and killed. Another man, Saw Mu Der, aged 36 was also shot dead, and Saw Kwa Kwa, aged 20, was captured and executed. At least 14 other civilians from several villages in the area were captured.

“The Burma Army is continuing to force villagers to contribute labour. On 16 May, according to the Free Burma Rangers, over 2,000 civilians in northern Toungoo District were forced to carry rations for the Burma Army. On 7 May, over 1,000 villagers were forced to clear a new road between two Burma Army camps in Nyaunglebin District.

“In a separate incident, Burma Army troops attacked villages in Papun District. A 27 year-old woman, Naw Bu Ru, was killed while working in the fields. Her body was later burned by the soldiers.

“These attacks are the latest in the Burma’s Army’s worst offensive against the Karen in a decade. On 5 April, Burma Army troops mortared Sha Zi Bo village in northern Toungoo District, killing a two year-old girl and injuring at least five people. In Nyaunglebin District, villages have been shelled and burned, and farms destroyed.

“Stuart Windsor, National Director of Christian Solidarity Worldwide, said: “The continuing offensive against the Karen people, and the accompanying gross violations of human rights including torture and killings, are completely unacceptable. How much longer will the international community, including Burma’s neighbours, allow this to go on? The evidence is mounting, and efforts should be made to investigate crimes against humanity and genocide.” (source)

From The Guardian, May 15:It is the latest bloody chapter in the world’s longest-running civil war that has lasted nearly 60 years and sent millions fleeing into Thailand. The conflict also displaced 500,000 people in Burma. But the newest offensive, out of sight in the jungle, is driven by the Burmese junta’s aim to control resource-rich eastern Burma by enslaving some villages and destroying others – killing, forcibly relocating or driving out the inhabitants.

The prize is a bonanza of foreign currency from gems, gold, logging and hydro-electricity that will bolster the repressive regime. The largest and most lucrative project is a series of four dams on the Salween river generating cheap power, mostly for export to Thailand.

“The regime uses development as an excuse for clearance,” said Mark Farmaner, of the UK-based advocacy group, the Burma Campaign. “The generals say these are ‘development projects’, but they’re cash projects. They invest massively in things like the dams and the revenues go straight to the dictatorship.” (read the full article)

For More News, go to:
Salween Watch
The Democratic Voice of Burma

(if you have any more news or websites covering what’s happening in Burma, please post a quick comment below. )