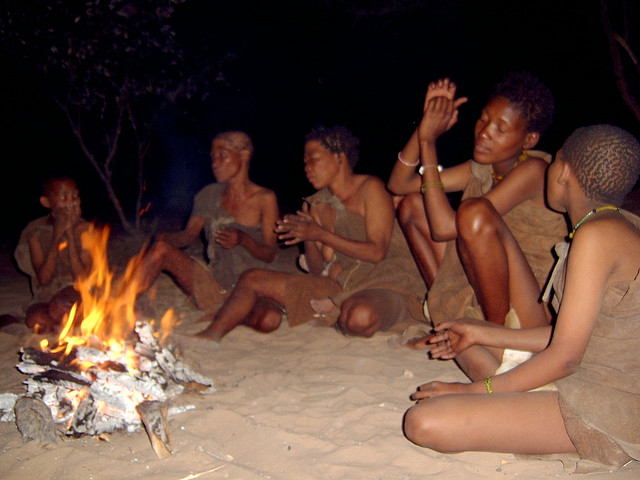 First People of the Kalahari still singing and dancing - Ghanzi, Botswana. By Petr Kosina, on Flickr
Support our journalism. Become a Patron!

Botswana’s government this week approved a massive $3 billion diamond mine in the Central Kalahari Game Reserve – confirming once again that they probably couldn’t care less about the Kgeikani Kweni, the First People of the Kalahari, on whose lands the mine will be located.

The curiously-timed approval was issued on January 18th “in the middle of the Kalahari Bushmen’s appeal against the Botswana authorities’ refusal to allow them access to water there,” notes a recent article by Survival International.

It’s like salt on a wound, as if the government’s saying the mining operation will proceed regardless of the court’s decision, as a Kgeikani citizen recently told Survival:

“Why does the government choose to issue the mining licence today, while our appeal for water is underway? It seems like this is their answer to our case. They are saying to us that even if we win our case and get water, the diamond mine will go ahead.”

Incidentally, the company that won the approval, UK’s Gem Diamonds, is also claiming to have secured the Kgeikani’s consent for the mine. However, given what they were once told by the government, it seems unlikely that is was informed consent or even close to unanimous. Botswana told them that they could have a mining permit on the condition that they did not provide the Indigenous People with any access to water.

The government issued two other “responses” nearing the end of 2010. The first, on November 24, was a statement condemning the “insidious media articles by Survival International (SI) promoting the boycott of Botswana diamonds and tourism.”

“The Government of Botswana is strongly committed to the development of its entire people. It has consistently pursued policies aimed at ensuring that all the people of Botswana can enjoy the benefits of education, modern medicine and the comforts brought by science and technology. We have, and continue to, manage the natural resources of the country for the common good of all citizens.

[…] It is also evident that, contrary to SI’s claims, Basarwa inside the CKGR are not nomadic hunter-gatherers, as they live in established permanent settlements and hunt wildlife with guns and horses and engage in poaching. Regrettably, their poaching has led to a decline of all species in the Game Reserve, a development that is against global efforts to conserve the environment and biodiversity.

[…] As pointed out in previous statements, the Government of Botswana does not force Basarwa to move out of the Game Reserve. It rather encourages them to relocate to areas with social amenities. Consultations were carried out over a period of ten (10) years encouraging Basarwa to relocate. Basarwa are no doubt well aware of the choices before them, which are either a life of grinding poverty inside the Reserve, or a life of more and better opportunities outside the Game Reserve.

The government’s rhetoric is pretty far from the reality. Botswana evicted the Kgeikani Kweni from their land in 2002, something that Botswana’s high court recognized and condemned in a landmark ruling on December 13, 2006.

In that ruling, the court found the eviction to be “unlawful and unconstitutional”, and that the Kgeikani have the right to return home as well as the right to live, hunt, and gather on their ancestral lands in the Central Kalahari Game Reserve.

Following this ruling, Botswana covered up the Kgeikani’s only source of water on the reserve–something they have been attempting to resolve ever since..

As far as social amenities go, Survival points out, “13 years after the main resettlement camp was created, virtually no Bushmen have found permanent employment, and alcoholism and disease are rife.” One of Botswana’s Judges also issued this telling statement:

“[The government] might want to consider whether the disappearance of a people isn’t too high a price to pay for offering services at a centralized location.”

The second response, “an astonishing outburst,” Botswana president Khama accused the Kgeikani of living a “life of backwardness,” “a primitive life of deprivation co-existing alongside wild animals”, and “a primeval life of a bye [sic] gone era of hardship and indignity”.

In early November, Botswana’s minister of environment, wildlife and tourism issued similar remarks. In an interview with the BBC, he stated:

“I don’t believe you would want to see your own kind living in the dark ages in the middle of nowhere as a choice, when you know that the world has moved forward and has become so technological.”

Given these strong and clearly racist comments, it seems fair to say that Botswana’s so-called “commitment to development” is a colonial program that’s aimed at erasing the Kgeikani’s way of life. Or, in more diplomatic terms, it’s a democratic effort to “lift them out of darkness” so they can enjoy the glories of civilization with its q-tips, its toaster ovens, its carbonated beverages.

No doubt the Kgeikani can see some value in “civilization.” Q-tips, after all, are pretty impressive. But given the choice, it’s painfully obvious that they would rather live their own way of life, on their own terms. That’s why they sent an appeal to that African Commission and why they’re in court once again.

Now that the world’s government’s have unanimously affirmed their support for Indigenous Rights, by signing the United Nations Declaration on the Rights of Indigenous People, it is undeniable that Indigenous People like the Kgeikani Kweni have a measurable right to live according to their own traditions on their ancestral lands without being infringed upon by any level of government, by citizens or by companies.

In the very least, a government must adhere to its own agreements and abide by the decisions of their courts rather than fascistically dismiss them when it’s convenient

Fascism and amorality is the true mark of barbarism, after all. Not a way of life that flourishes in the natural world without needing to be propped up or developed at the expense of other people and cultures.