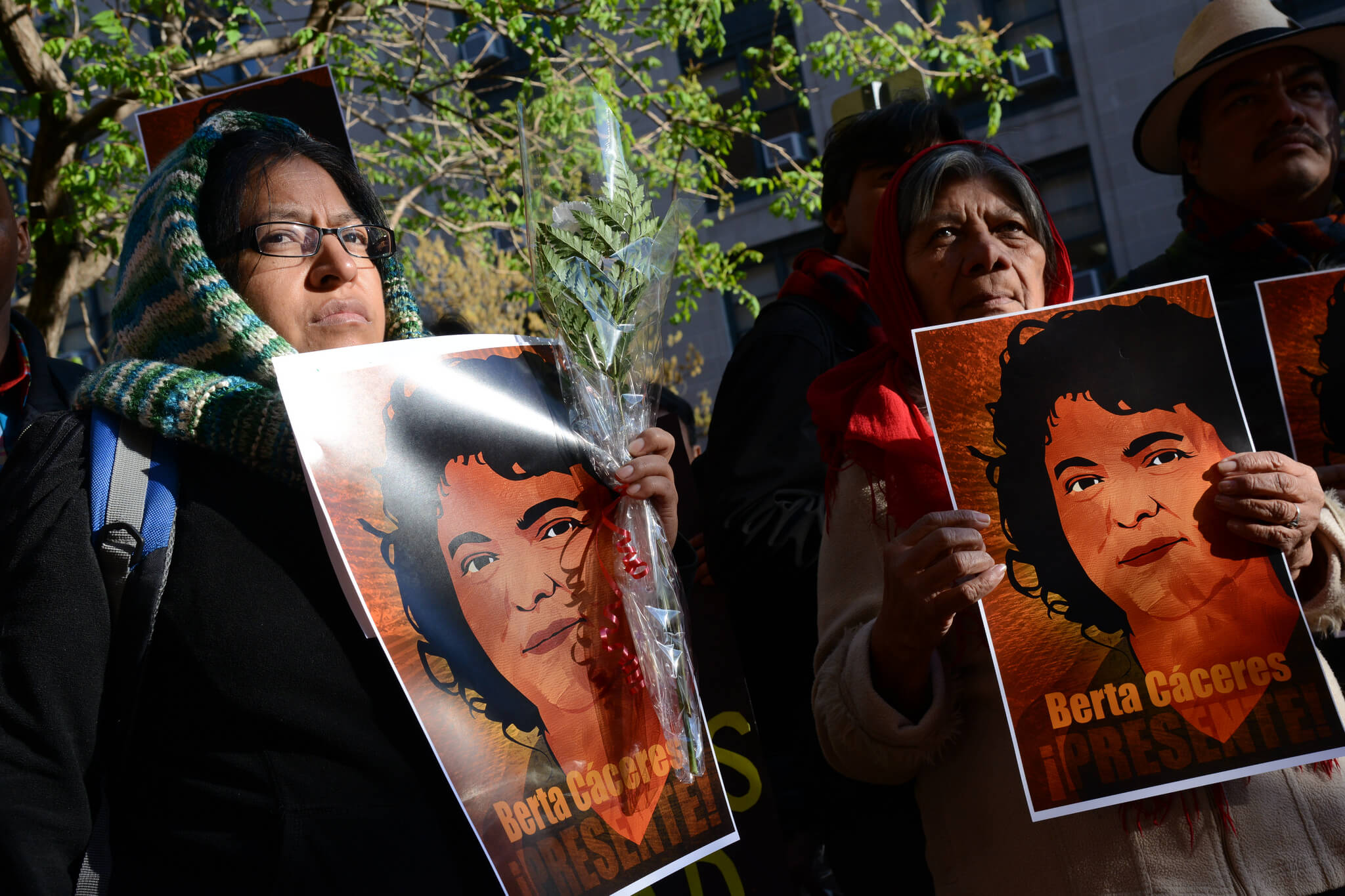 Blood in the Water: Why We Must Defend Water Protectors

A year ago this week, men broke into the home of Honduran environmentalist Berta Cáceres. Armed paramilitaries first opened fire on her friend, Mexican environmentalist Gustavo Castro, who survived only by playing dead. Then they entered her bedroom and shot her to death.

Berta wasn’t targeted because she was rich. She wasn’t part of a feud. She was murdered to silence her opposition to a dam project that threatened her community and their way of life.

The international community erupted with horror and outrage. In 2014, Berta had won the prestigious Goldman Environmental Prize, and she was a force of nature for indigenous land and water rights. How could such a thing happen?

But Berta’s murder is not an isolated incident. As Global Witness has shown in a recent report, Honduras is the world’s most dangerous place to be an environmental defender. An astonishing 123 activists were murdered in 2015, and countless others face constant intimidation, harassment and violence.

The violence is not limited to Honduras. All over the world, governments and big business are encroaching on indigenous lands – which often contain vast natural resources and some of the last intact ecosystems on the planet – in voracious land and water grabs.

They are emboldened by weak legal protections for indigenous peoples and the environment. And while murders grab headlines, they represent just one end of a broad spectrum of harassment and intimidation that may persist for years before violence occurs. Berta had complained of threats long before she was murdered. But even though the Inter-American Commission on Human Rights had intervened on her behalf, she was still shot dead.

The hydropower industry is particularly implicated in such abuses. Violence and intimidation have plagued projects all over the world, from India and Brazil to Guatemala and Peru.

Despite the risks, and the vast power imbalance, indigenous people are resisting, but we must not leave them alone in this fight. Where governments don’t protect the rights of their people, the international community must step in. We must hold the financiers and developers of these deadly projects accountable.

The Berta Cáceres Act, introduced this week in Congress, demands that the US suspend its funding to Honduran security forces, who are implicated in her death. It also calls for an independent international investigation – because while some of her killers have been caught, those who gave the orders have not been identified, and the investigation has been seriously compromised by irregularities.

An independent investigation is essential to finding justice for Berta. But it’s not enough. The hydropower industry must take immediate steps to prevent such tragedies in the future.

Instead of greenlighting a project, and then rushing to do damage control when violence erupts, the industry can and must avoid projects where such conflicts are inevitable. Once violence and intimidation happen, it’s too late.

Companies can no longer say, “this is not our responsibility.” Most hydropower projects would never happen without outside investment. International finance institutions and private investors, therefore, hold an enormous amount of power. The UN Human Rights Council agreed unanimously that global corporations have a clear responsibility to respect, protect and remedy human rights impacts.

The hydropower industry typically undertakes extensive risk assessments. While the industry may not have the expertise required to assess human rights risks effectively in-house, there are many groups that do, and can help hydropower developers evaluate the warning signs and pull out of problem projects.

Berta’s murder did not come out of the blue. For years, security forces associated with the dam builders had dogged Berta’s steps. Monti Aguirre, a good friend of Berta’s, remembered one of their last conversations together. “I know those that want me killed are close by,” Berta told her. “Sometimes I see strange people outside of my house.”

No individual should live in fear for simply defending their water and lands. Indigenous people are often the best custodians of the planet’s wild places. But they face ever-increasing threats for their defense of their waters and lands. On the first anniversary of Berta Cáceres’ murder, and the eve of International Women’s Day, the hydropower industry can and must do better – or else they will have more blood on their hands.

This article was originally published at International Rivers. It has been re-published at IC under a Creative Commons License.