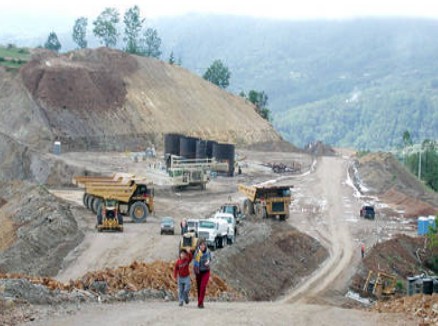 Blackfire mine shut down over environmental concerns

A controversial open-pit Barium mine owned by the Canadian mining firm Blackfire has been temporarily shut down by state authorities in Chiapas, Mexico.

The surprise move comes just two days after the State’s Attorney General arrested three men believed to be responsible for the death of Mariano Abarca Roblero, “a passionate critic of Blackfire”, who he blamed for contaminating local rivers, destroying local crops and killing fish and livestock. As noted in the Canadian Press, all three men are somehow linked to the company.

In discussing the government’s motives for closure, Chiapas Secretary for the Environment denied that it had anything to do with Roblero, however, reiterated his long-held concerns, that Blackfire is polluting the air and water. The Secretary also said that Blackfire has diverted streams and built roads without any authorization.

Several civic groups, including the Mexican Network of People Affected by Mining (REMA) to which Roblero was a member, have announced their support for the lock down, but say it’s still not enough. They want the mine shut down for good, like New Gold’s Cerro de San Pedro Mine.

Company officials, on the hand, claim to be mystified over the whole thing, and assert, like every other Canadian company in the world, that they haven’t done anything wrong.

Of course, that wasn’t so much the case when the government officials arrived on December 7 to shut down the mine. Like common a group of common thugs, company executives and employees verbally threatened the officials and tried to prevent them from doing their job, as ultimately mandated by Mexico’s Constitution.

While these events continue to unfold, Canada’s Parliament continues to debate Bill C-300, a private member’s bill that offers some desperately needed controls over Canadian resource extraction companies like Blackfire and dozens of others around the world known for violating human rights and environmental standards.

For more information on Blackfire’s activities in Chiapas, watch this 13-minute video on YouTube, which features interviews with Mariano Abarca Roblero just two months before he was assassinated.