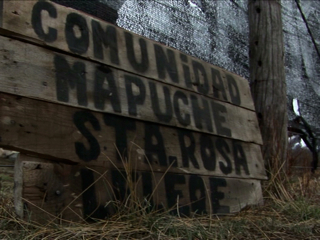 Benetton vs Mapuche: Colours at the end of the World

The high-profile campaign against the Italian Group Benetton, as examined in the documentary, Colours at the end of the World, may no longer be making international headlines. However, the Mapuche-led struggle to reclaim ancestral lands continues to this day.

As the World War 4 Report noted this week, “Indigenous Mapuche-Tehuelche organizations and allied groups marched in Esquel, in the western Argentine province of Chubut, on March 10 to support Santa Rosa Leleque community members as they filed an appeal in a land dispute with Compañía Tierras Sur Argentino SA, a subsidiary of the Italian multinational Benetton.”

Nine days earlier, on March 1, Judge Omar Magallanes issued his ruling on the contested land, “in which he conceded the multinational company 500 hectares where the community is located and ordered the Mapuche residents to leave within 10 days,” notes the World War 4 Report.

The Mapuche say that the Judge’s decision is in error of the law, because it ignores a previous Supreme Court order which found that indigenous law should be applied to the land dispute.

It also appears that the Judge, in his ruling, failed to take into account the rights and laws which protect the Mapuche people, including Article 75 of the Argentine Constitution, ILO Convention 169 and the National Emergency Law 26,160 and 26,554.

In addition to the appeal, the Mapuche are calling on civil society and all neighbouring Mapuche People to “… continue to accompany us in this long uneven struggle.”

Watch “The Colours at the end of the World” in its entirety http://www.cultureunplugged.com/play/2182/Colours-at-the-End-of-the-World

Updates (in Spanish) can be found at http://www.avkinpivkemapu.com.ar/