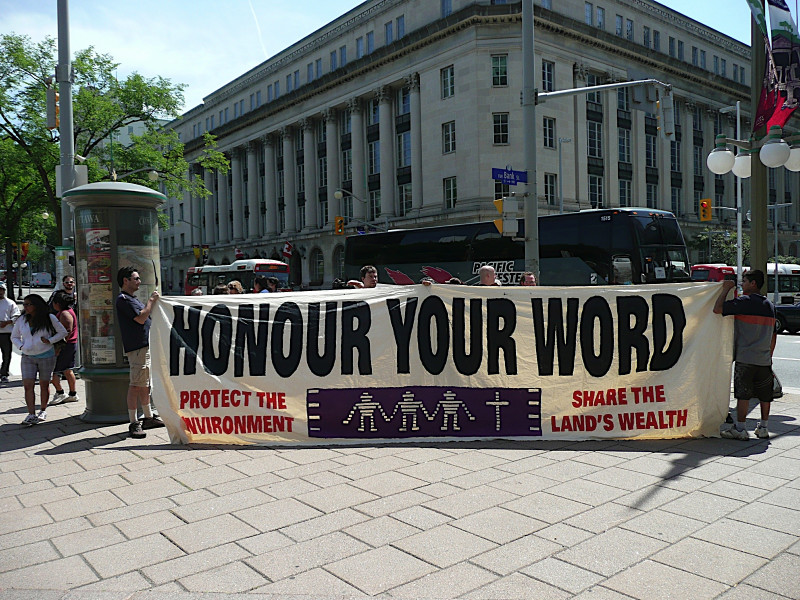 Barriere Lake Algonquins have the right to govern themselves

The Canadian government is getting ready to dispose of the Barriere Lake Algonquin’s traditional governance system, using a rarely invoked piece of the Indian Act known as Section 74.

As if jumping back to 1876, the Canadian government has invoked Section 74 of the Indian Act, a draconian measure that grants the minister of Indian Affairs the right to impose an electoral system on any First Nation that has its own leadership selection process.

The last time Canada invoked Section 74 was in 1924, when the colony state unilaterally deposed the Haudenosaunee government and placed a padlock on the Confederacy lodge.

This time around, the Minster has his sights on the Barriere Lake Algonquins, who live on unceded territory about 300km north of Ottawa, in the Province of Quebec. Barriere Lake is one of only a handful of Indigenous Nations in Canada that still have their own governance system.

“Community members refuse to accept this unilateral and draconian attempt to wipe out the way we govern ourselves. The government is attacking our governance system because it is intimately tied to our continuing use and protection of the land. We will defend our rights and customs for the sake of our generation and the generations to come,” says Tony Wawatie, a spokesperson from Barriere Lake.

It is also widely believed–by community members, activists, politicians and others–that by imposing section 74 the federal government hopes to dismiss several binding agreements that Barriere Lake has signed with Canada and Quebec. Both governments have continuously refused to implement the agreements; most notably, the landmark 1991 Trilateral Agreement which has been praised by the United Nations and the Royal Commission on Aboriginal Peoples.

In any case, Canada’s use of Section 74 is “a breach of their constitutionally-protected Aboriginal right to a customary system of government, and a violation of the minimum standards included in the United Nations Declaration on the Rights of Indigenous Peoples,” says the Indigenous Peoples Solidarity Movement (IPSM). Further, “It is an attempt to politically weaken the community, by destroying the way they have governed themselves since time immemorial.”

“The Government move also contradicts a recent Federal Court decision concerning Barriere Lake’s leadership. On February 17, 2010, Federal Court Judge Robert Mainville concluded in the case of Ratt v. Matchewan that Barriere Lake can ‘select their leadership in accordance with their customs unimpeded by any conditions or requirements which the Minister may deem appropriate ‘”

According to Barriere Lake Solidarity (BLS), the Department of Indian Affairs has already circulated a notice in Barriere Lake “announcing they intend to hold section 74 Indian Action band elections on August 19, 2010.”

However, as Tony Wawatie stated, “The community has every intention of resisting Indian Affairs’ attempts to abolish their traditional governance system.”

BLS also says the community is being increasingly harassed by the Quebec Police, who have been policing their territory since April 1, 2010. “Community members have been regularly pulled over on the highway and on the access road to their reserve. Some women have recounted being pulled over by an SQ officer and being made the subject of sexist remarks. ‘What have you got there in back seat? Got something for me?’ they were asked. The officer then followed them home in his cruiser after telling them, ‘I’m going to come over and sleep with you guys.'”

“The escalation is an indication that the Canadian and Quebec governments may attempt to use the Quebec police to impose their political dictates, as they’ve done in the past. Barriere Lake’s supporters will need to be vigilant and hold their governments to account, lest they attempt to push through section 74 Indian Act elections with brute force,” adds BLS.

For more information and updates, keep an eye on http://www.ipsmo.org and http://www.barrierelakesolidarity.org

To send a letter in support of Barriere Lake’s rights, please fill out the form at http://barrierelakesolidarity.blogspot.com/2007/10/blog-post.html