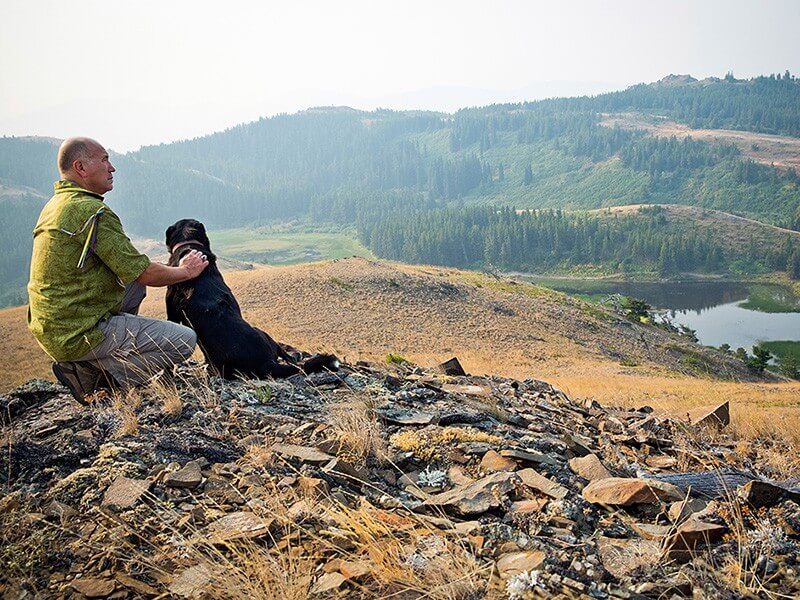 Badger-Two Medicine: Too Sacred to Drill

November 16, 2016 — Washington, D.C. — Today, the U.S. Department of the Interior and Devon Energy announced retirement of more than 32,000 acres of oil and gas leases from the Badger-Two Medicine roadless area. The move comes on the heels of a previous lease cancelation by the Department of the Interior, and echoes the call by many that the Badger-Two Medicine region—a vital wildland link connecting the Bob Marshall Wilderness with Glacier National Park, and an indispensable stronghold of Blackfeet culture—should not be industrialized by roads, bridges and drill rigs.

At today’s ceremony to announce the voluntary retirement, Interior Secretary Jewell noted, “…the cancellation of leases that were set many years ago in an area that should never have had leases to begin with. This is the right action to take on behalf of current and future generations.”

“One of the core values that we have is to be a good neighbor. We certainly think this is a great opportunity to demonstrate the fact that we can be a good neighbor in this situation,” said Devon Energy President and CEO Dave Hager.

“There are special places in this world where we just shouldn’t drill, and the Badger-Two Medicine is one of those places,” said U.S. Senator Jon Tester, who spoke at today’s announcement. “This region carries great cultural and historical significance to the Blackfeet Tribe and today’s announcement will ensure that the Badger-Two Medicine will remain pristine for both the Tribe and the folks who love to hunt, hike, and fish near Glacier Park and the Bob Marshall Wilderness.”

Conservation groups responded with enthusiasm, praising the leadership at Interior and Devon Energy for their work to protect Montana’s natural and cultural heritage.

“It’s incredibly satisfying, after all these decades of conflict and controversy, to see the players negotiating in good faith to find a solution,” said Kendall Flint, president of the local conservation group, Glacier – Two Medicine Alliance. “We’ve always known that the key to solving this would be partners—Blackfeet, conservation, corporate, and especially federal partners, people like Sen. Jon Tester and Sec. of Interior Sally Jewell. For us, industrializing the last refuge of Blackfeet culture and dismantling our last best wildlands was never an option, and they understood what was at stake.”

Flint’s organization has long sought retirement of the leases, which were sold amid heated controversy for just $1 per acre more than 30 years ago.

The 130,000-acre Badger-Two Medicine is part of the Lewis and Clark National Forest, and is bordered by Glacier National Park, the Bob Marshall Wilderness Complex and the Blackfeet Indian Reservation. The Department of the Interior under Secretary James Watt granted the leases in the early 1980s, sparking immediate and prolonged opposition from local residents, conservationists, and the Blackfeet Nation, who have since maintained the leases were issued illegally, in violation of bedrock environmental laws, and without required Tribal consultation.

Interior officials concurred, and today announced a new accord with Devon Energy that retires more than 32,254 undeveloped acres.

Prior to today’s announcement, many companies—including British Petroleum, Occidental Petroleum and Williams—had voluntarily retired more than 110,000 acres of Badger-Two Medicine leases, noting the world-class natural and cultural heritage of the area, and its importance for wildlife traveling between the wilderness and Glacier Park. Of the few leases that remained, one—held by Solenex LLC—was canceled by Interior officials in March 2016. Two smaller leases remain, and efforts continue to negotiate their retirement. Devon’s participation in today’s agreement makes the company the latest in a long history of corporate good neighbors, committed to protecting this world-class landscape.

“The retirement of the Devon leases is incredibly significant,” said Michael Jamison, of the National Parks Conservation Association. “This was far and away the largest company left on the ground, with the largest lease-holding, and Devon’s leases were right in the heart of the Badger-Two Medicine. They are absolutely the key to unlocking the conservation solution for Montana’s wild open Rocky Mountain Front and Glacier Park region. We owe a real debt of gratitude to the people who worked to make this happen.”

“When viewed through this lens of history, it is a milestone for conservation in North America,” said Jennifer Ferenstein, of The Wilderness Society. “Montanans are proud of our natural heritage, especially along the Rocky Mountain Front. There are certainly places for industry in Montana, but the Badger-Two Medicine is not one of those. Thanks to the Blackfeet Nation and the tremendous support of our state’s leaders—people such as Sen. Jon Tester, who has worked hard from day-one to preserve this heritage for future generations. Without their leadership, these sorts of accords would not be possible.”

“It’s humbling and a little overwhelming, actually, to see the many people who have come together, from so many different walks of life, on behalf of the wildlife and wildlands of the Badger-Two Medicine,” said Casey Perkins, of the Montana Wilderness Association. “It’s a real testament to Montana’s leadership, and the leadership of the Blackfeet, that we were able to reach this settlement. People like Sen. Tester and Gov. Bullock and Sec. Jewell have shown real courage and purpose in making this possible. Each of them clearly understand the tremendous economic and cultural importance of the Badger-Two Medicine.”

Tribal and community partners agreed that today’s announcement is a tremendous step toward a lasting legacy of protection for the Badger-Two Medicine, and re-confirmed their commitment to achieving retirement of the region’s last two remaining leases.

“This is a landmark moment in the decades-long battle to protect the Badger-Two Medicine region, and future generations will be even more thankful for it than we are today,” said Tim Preso of Earthjustice. “But the fight is not over. We will continue to advocate for this wild, sacred landscape until the last threat to its integrity is removed.”

The 1980s-era leases have long stood in stark contrast to a legacy of conservation throughout Montana’s Rocky Mountain Front region. Beginning with the establishment of Glacier National Park in 1910 and bolstered by creation of the Sun River Game Preserve in 1913, conservation measures have since included: the creation of Waterton-Glacier International Peace Park (1932); Sun River Wildlife Management Area (1948); Bob Marshall Wilderness Area (1964); Scapegoat Wilderness Area (1972); Great Bear Wilderness Area (1978); and passage of the Rocky Mountain Front Heritage Act (2014). Within the boundaries of the Badger-Two Medicine roadless area, recent conservation measures include a Congressional ban on any future federal oil/gas leasing (2006), and a prohibition on motorized travel (2011). The entire Badger-Two Medicine region has been designated a “Traditional Cultural District” under the National Historic Preservation Act, in recognition of its importance to Blackfeet tradition and culture.

This article was originally published at Earth Justice. It has been re-published at IC with permission.