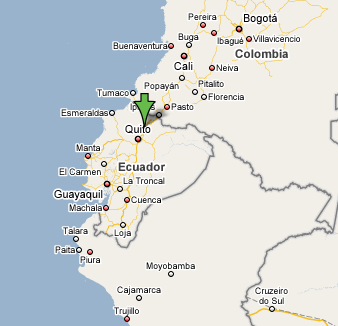 Earlier this week, the Ecuadorian government held a press conference where it announced that Canada’s Ascendant Copper must suspend all its activities at the controversial Junin project, an open pit copper mine located in the Tropical Andes of Ecuador, for violating the country’s mining laws. This is the fourth stop work order since last December.

Immediately after the conference, Ascendant issued a statement emphatically denying it has violated any laws, and even says the Minister of Oil and Mines just doesn’t know what he’s talking about.

Should we take their word for it? According to Glen David Kuecker, Associate Professor of History at DePauw University:

“The credibility of anything that comes from [CEO] Gary Davis is directly measured by the market’s confidence in Ascendant Copper stock. I think it measured in at 17 cents a share today. It is obvious that nobody takes any statement issued by Ascendant Copper with any degree of seriousness.

Now, the future of the Junin Project hangs in the Balance. The Minister of Oil and Mines says this most recent stop work order may very well lead to a revocation.

On top of that, in the near future Ascendant may find open pit mining altogether barred in Ecuador, along with the possibility of future large-scale mining projects.

From Upside Down World – The Ecuadorian government ordered Canada’s Ascendant Copper to suspend all activities at its controversial Junin project on Tuesday for violating the country’s mining laws.

“We will see how the facts evolve, but eventually this could lead to a revocation,” said Minister of Oil and Mines Galo Chiriboga at a press conference. “For those concessions that have violated legal and constitutional regulations…we will apply the law and that will be our mining industry policy.”

Ascendant wants to build an open pit copper mine in the Tropical Andes of Ecuador, which according to Conservation International is one of the most ecologically diverse areas in the world. A preliminary environmental study by a Japanese mining company that tried, and because of lack of local support failed, to open a mine in the 1990’s found that mining in the area would cause massive deforestation, climate change, poison water supplies, threaten rare and endangered species and would forcibly relocate hundreds of families.

“It’s a fine political balancing act Chiriboga is involved in,” said Zorrilla. “I see it as an attempt to close down Ascendant’s operations in Intag while at the same time trying hard not provoke the powers-that-be in the international financing institutional world, not to mention the wrath of the Canadian government.”

But Ecuador’s forthcoming constituent assembly to re-write the country’s constitution could possibly ban open pit mining (which is the type Ascendant would use), as well as all large-scale mining projects. This would take the pressure off government officials as any change in mining laws would be a result of a completely democratic process—something that would be very difficult for foreign companies and governments to argue against.