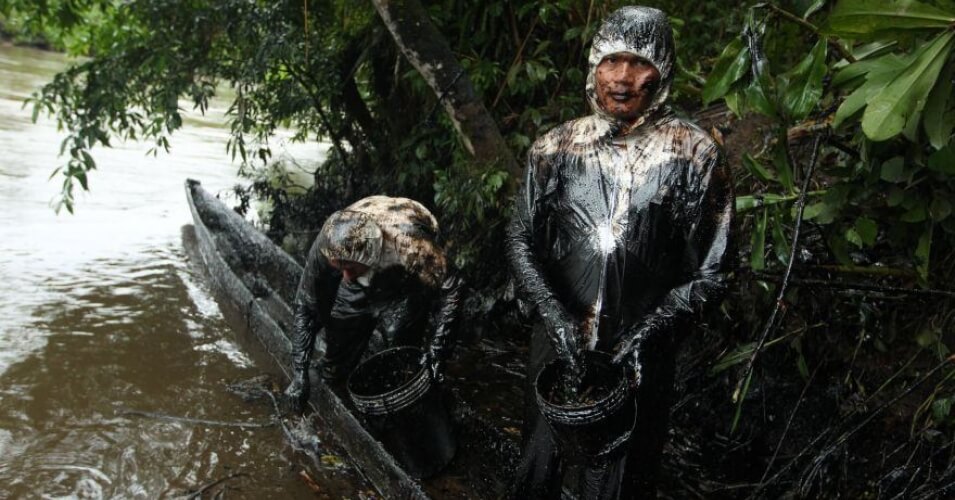 "Those responsible, where are they?" Water supply and delicate ecosystem contaminated by spate of oil spills in Amazon
Indigenous people are struggling to clean up 3,000 barrels oil that have poured into the Chiriaco and Morona tributaries of the Amazon River. (Photo: Alessandro Currarino / El Comercio")
Support our journalism. Become a Patron!

A disastrous spate of oil spills in the Peruvian Amazon have gone from bad to worse in recent days, leaving Indigenous tribes frantically trying to clean up the mess left by the nation’s state-owned oil company.

The catastrophic ruptures in Petroperu’s Northern Peruvian Pipeline occurred on January 25 and February 3 and have threatened the water supply of nearly 10,000 indigenous people, says Amazon Watch.

On February 22, Petroperu officials confirmed to Reuters that the oil has poured into two critical Amazon River tributaries that eight Achuar tribes depend on for water. According to the news agency, these two tributaries of the Amazon River, the Chiriaco and Morona rivers, are now filled with 3,000 barrels of oil.

Critics charge that the spills continued to spread and caused far worse damage after the responsible company, Petroperu, failed to act to contain the oil released by the pipeline breakages.

A third pipeline rupture was rumored on February 19, reports Amazon Watch, but the state-owned petroleum company took to Twitter to deny those reports.

Over the weekend, local activist Marco Arana Zegarra posted horrific images of the oil’s spread in the Chiriaco tributary:

“Those responsible? Where are they?” Zegarra appealed.

Waterways flow with black sludge and trees and flowers are rendered nearly unrecognizable by a thick coating of oil in video footage of the spills:

“At least this time,” observed Zegarra, “Petroperu has given Indigenous populations suits to wear for cleaning up oil.”

Petroperu president German Velasquez “denied reports the company paid children to clean up the oil,” reports the Guardian, but then he went on, perhaps damningly, to say that “he was evaluating firing four officials, including one who may have allowed children to collect the crude.”

“It’s important to note that the spills…are not isolated cases. Similar emergencies have emerged as a result of defects in sections of the pipeline,” the national environmental regulator said, according to the Guardian.

The regulator “ordered Petroperu to replace parts of the pipeline and improve maintenance,” states Reuters. The Guardian reports that Petroperu will face fines of up to $17 million if it is proven that the oil spills have affected the health of locals.

“This environmental disaster is just the latest in a long history of oil and gas leaks in the area,” laments Indigenous rights group Survival International, observing that “[m]ore” than 70% of the Peruvian Amazon has been leased by the government to oil companies.”

The group translates a call to action by AIDESEP, an organization that fights for indigenous people in the Peruvian Amazon, in which it pleads for “international public opinion, the media, NGOs and civil society to pay attention to this serious event that puts in danger the lives of thousands of people living in the area who have traditionally been neglected.”

This article was originally published at Common Dreams. It has been re-published at IC under a Creative Commons (CC BY-SA 3.0) License.